Hans A. from Quiet Cool shares his thoughts on a horror anime classic.

Vampire Hunter D (1985) is based upon a novel by Hideyuki Kikuchi; its character designs were designed by Yoshitaka Amano; and its director is Toyoo Ashida. One of the animators who worked on the film hinted at the difficulty in creation of animation that had "an antique feel and a futuristic feel." Set in 12090 A.D., Vampire Hunter D is about Doris, a young farmer who lives with her younger brother, Dan. One evening while she is patrolling the orchards, she is visited by a massive vampire who gives her the vampire's kiss. Doomed at the prospect of her vampiric future, a lone wanderer crosses her path one day--his name is D and is a vampire hunter. He agrees to help Doris. 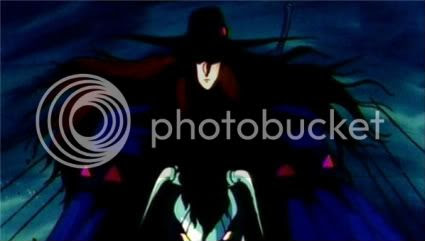 I originally saw Vampire Hunter D over twenty years ago on TBS (Turner Broadcasting Systems) network in an English-language version with its nudity and violence censored. I had never seen anime beyond say Speed Racer as a child and really only associated animation with children's programming. Not only was Vampire Hunter D animated, it was a horror film; really dark; and on its surface, not aimed at children. 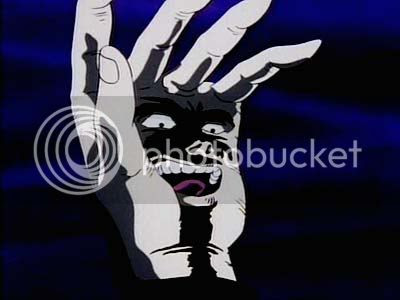 The art is amazing. "The antique feel and futuristic feel" is successfully rendered. The village which sits in the shadow of the vampire's castle, looks like it came out a vintage Hammer horror film; although in the night scenes, neon signs are present above most doors. The landscape moves from lush scenery to a post-apocalyptic wasteland: as it is set in 12090, the imagery of buildings of one civilization built upon another, all now in rubble, occupy the space of deserted wide-open spaces. Folks still drive horse-drawn buggies, but more than likely they are being drawn by cyborg horses, much like the one D rides. The vampire's castle is spooky on the outside in a Gothic sense, but its interior has catacombs like the Greek underworld with a wide-open spaces that look like the inside of the Death Star from Star Wars. 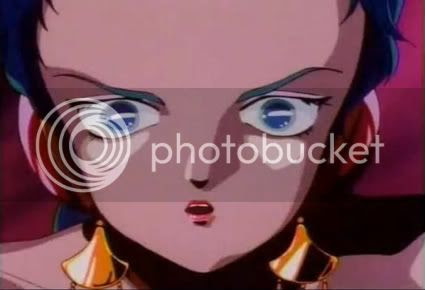 D has a hidden past and he's quiet and dressed like an anti-hero out of an Italian Western (save his cape). He also has a talking hand, but that's better left discovered for prospective viewers. In his other hand, he brandishes a sword and reveals himself an extremely fierce warrior. It does not take him long after he is enlisted by Doris that D dons his horse and storms the castle alone. In a brilliant sequence, D gets caught by siren-like snake women to then go on a blood-and-guts fury and exit the castle in a final battle with a gigantic golem. There are myriad characters in Vampire Hunter D, and during its short run time (under ninety minutes) judicious and expert use by the artistic collaborators creates detailed and rich characters in a swiftly-paced and exciting story. 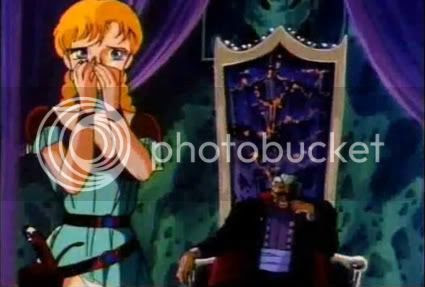 The vampire who runs the country is named Count Magnus Lee (isn't that an interesting allusive name?). Vampire Hunter D was released on DVD by Urban Vision back in 2000 (and it appears OOP but a cheap copy can be found around online.) It has the very good English-language version and the original Japanese-language track. Included as supplements are the original Japanese trailer, photos from the original 1985 press conference announcing the production in Japan, and a vintage "making-of" featurette with the director, the animators, and the leading voice actors (and from where all objective facts in this review are taken). Surreal and weird and unique, Vampire Hunter D will appeal to virtually any fan of horror cinema.
Posted by Richard of DM at 7:35 AM