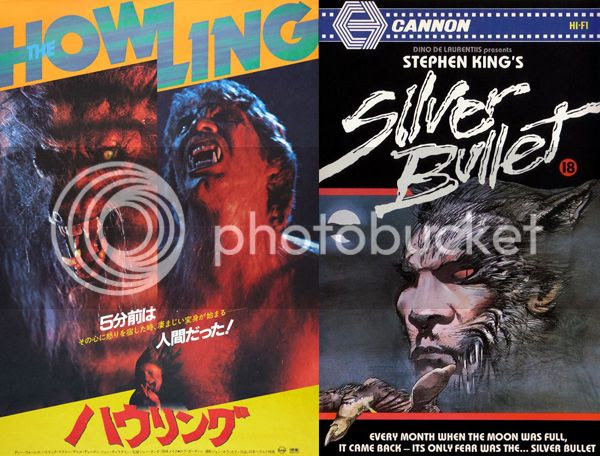 Brad and I continue our crazy productive streak with yet another new episode of the show. We can't keep going like this, can we? No, we can't. But hey, who cares, right? Let's live for today. Or tomorrow. Whatever! Please listen to our new episode:

Did someone say "archived episodes"? 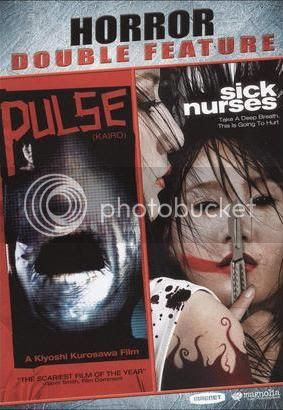 Who cares about old episodes?

Brad returns with a new review! Check it out!

Posted by Richard of DM at 2:26 PM No comments:

The Friday the 13th VOORHEESATHON

Franco Friday #48 - How to Seduce a Virgin 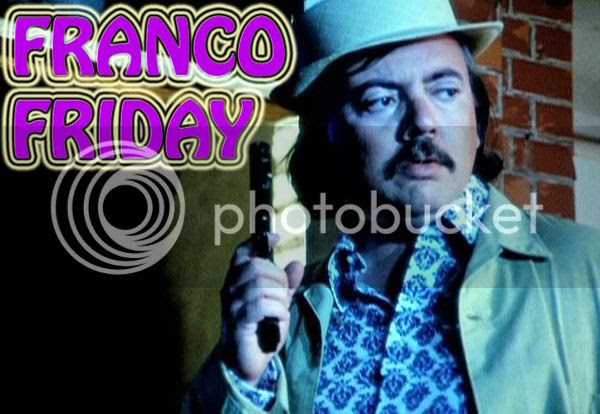 Franco Friday #48 - How to Seduce a Virgin

Wow, we are dangerously close to the end of this thing. I know you've heard this from me before but I really, really feel like I am ready for something new. There definitely needs to be a long time and a vast space between me and Jess Franco's films. The thing is, I am full of dread every time I start a Franco title and that's just not right. Instead of taking another break, I'm going to fight my way through and be done with it. I have chosen 8 more Jess Franco films (including this one) to round this out. So #55 will be my final Franco Friday. Okay, enough business, how about some pleasure? 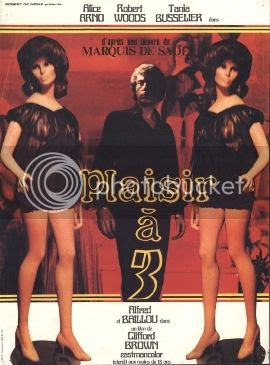 Alice Arno plays Martine Bressac, a woman who just got out of the loony bin. For the record, she should have turned right around and walked right back in. In terms of sanity, Martine is an undercooked blueberry muffin. Although it's never made entirely clear if it the reason she was locked up or not: Martine has a vision (or a memory) of slashing a naked man in his genital region (implied) with a straight razor. One thing is for sure, Martine is a sexual predator/serial killer of the highest order. She has a museum of statues made out of beautiful women in her basement. 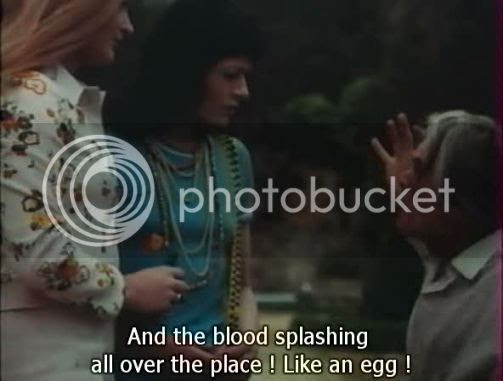 Since good things come in threes, Martine has two accomplices. The first is her husband Charles (played by Robert Woods). He helps Martine select her victims with his camera and a slideshow! The second is her mute little friend Adele (Lina Romay) whose skills include: moaning like a subnormal, running interference, and performing various somnambulistic sex slave tasks. These evil weirdos set their siights on Cecile (Tania Busselier), the teenage daughter of their neighbors. While the girl's parents are away, Martine and her cronies take care of Cecille by getting her drunk and taking her to sex parties. Predictably, things take an even darker turn when Martine becomes jealous of the attention that Charles is lavishing on Cecille. 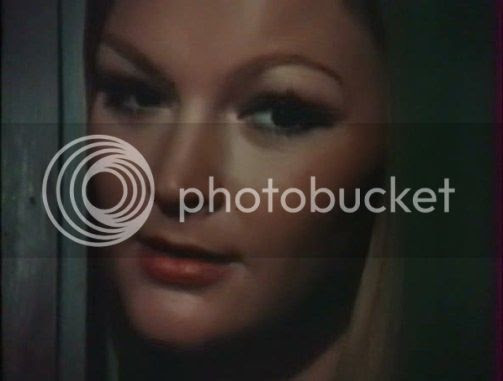 I really dig the score for this flick. It has all the funky bass lines, kooky keyboards, fuzz guitars, sorrowful flutes, and jaunty xylophones that you could ever ask for. Is it the only thing I like about How to Seduce a Virgin? Fuckin' almost! The biggest problem are the sex scenes. I know, I know, I sound like a broken record. But seriously, these aren't even good sex scenes. Either Franco was bored, his cast unwilling to play along, or he had some weird producers' criteria of what not to show. There is a threesome where we only see Alice Arno's bare butt and the rest is gyrating and moaning in the darkness for around 3 minutes. I feel humiliolated. That's humiliated and violated. I will admit that Alice Arno is 110% gorgeous in this. Woo! So hot. 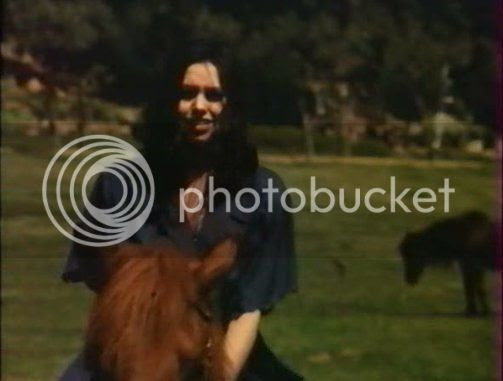 This isn't the worst of Franco but it is frustrating because it does have some style and the feeling of dread is palpable. I just wish that the duder had kicked this one into second gear a few more times. The best character is Malou, played by the unusual and dwarfish actor, Alfred Baillou. He is Martine's gardener and he is seriously demented. Supposedly, he saw a bishop fall to his death and the memory of that moment drove him insane. It's a weird little detail that adds to the quirkiness of this rather dull skin flick but I'm afraid that it's too little, too late. There are some twists (okay, maybe one) and some kink (yawn!) but there are much better Franco flicks out there.

The Friday the 13th moviethon... tomorrow 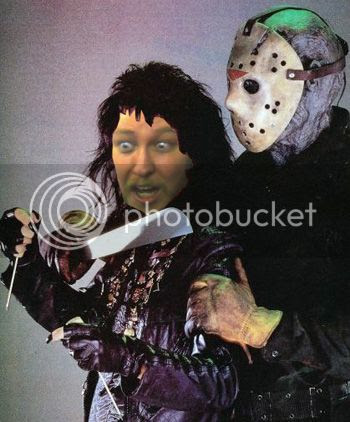 I've been waiting a little while for this. All I needed was a very special Friday. You know the kind! The type of Friday that falls on a 13th. Or is it the 13th fell on a Friday? Only Jason X knows for sure. I am going to attempt to watch all of the Friday the 13th movies in a row. I will be vlogging short reviews between each film to track the insanity. I decided that since I covered Freddy Vs. Jason when I did the Freddy Cougar Moviethon that I would cut myself a little slack and skip it this time. One more thing, this event will be a moviethon milestone for most movies I've ever watched in a row ever.

Posted by Richard of DM at 9:56 AM No comments:

Giallo Meltdown: The Book - Another Update 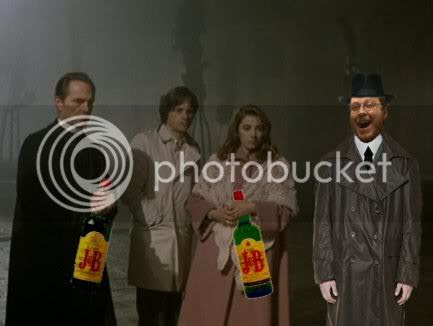 In case you're just tuning in, let me tell you about Giallo Meltdown. Way back in late 2007 or early 2008, I had the first Giallo Meltdown for my website: Doomed Moviethon. It was a life-changing moviethon. In the course of three days, I watched 21 giallo films. Not only did I have a blast, I also discovered a quivering madness known as "The Vibe" that I have been pursuing ever since. Over the years, whenever I needed inspiration for a moviethon, I would look to my giallo collection and find more fun things there to explore. After the fifth of these Giallo Meltdowns was so well received, someone suggested I turn them into a book.

Since there are so few books on the giallo genre, I felt like I could bring something interesting to the table. I am not making the definitive guide to the giallo here. I am making a fan book with a twist. These films are being reviewed under moviethon conditions. The shortest moviethon in this book is 13 movies. And the longest is 22 movies. These reviews get pretty loopy and I have never stopped myself from writing down even the most ridiculous stream-of-consciousness rants. I also include details like what I was eating, smoking, and drinking during these sensory overload festivals.

So where am I at now? As scary as it is to say this, I almost done. The weekend before last, I watched 19 movies for Giallo Meltdown 12. The last movie for that moviethon was the 199th film I've watched for the book. My wife LeEtta recently asked me when this project was going to be over. I told her that I kind of wanted to end on Giallo Meltdown 13 but I was terrified to stop there. I was having too much fun and stopping the moviethons for the book meant stopping something really important to me. She suggested that if I didn't put a cap on it now, the book would never happen. So I decided that Giallo Meltdown #13 would be the last.

I am now selecting the last 16 titles for the book. The final moviethon is tentatively scheduled for the last weekend in September of this year. Needless to say, I am excited and very, very frightened. Finishing these moviethons means that I have to start editing the book and finding a publisher. Spoiler alert: these are things that really scare me.

Please allow me to get personal for a moment. I want to talk about this now because this particular person was a big part of this project and I've wanted to say something about this for a while but I've been a little too depressed to go into it. Over two years ago, my wife's mother Margie was diagnosed with cancer. She fought the good fight but did not win. Last January, Margie left us all behind on planet Earth wondering what to do next.

Margie had been living with LeEtta and I for a year while she was getting herself back into a good place financially. The same week that she landed an awesome new job, she was told about the cancer. The next two years were the most insane, intensely sad, and soul-crushing time of our lives. This was obviously worse for my wife but both of our lives just went on hold during all of this madness. Margie continued to work from home and keep a brave face on things until a stroke she suffered during an operation took her from us.

Margie was always super supportive -some might say "enabling"- of me and my insane need to collect and watch movies that are sometimes unearthed gems and some that are cinematic crap that should have been flushed and forgotten forever. I will never forget staying up late and watching a title as wonderful and sleazy as So Sweet, So Dead with my mother-in-law. I had never seen the movie before and kept kicking myself for springing an unseen title on a family member. And yet, Margie didn't bat an eyelid at the relentlessly trashy subject matter or the violence. She just thought it was a cool movie. It was a truly bizarre evening.

So anyway, I just wanted you to know where this Giallo Meltdown book dealie was at and also where my head has been at for the last little while. Some of you have been with me from the very beginning and some of you might just stopping by for the first time. To both of you and those in between, I say thanks. Thank you so fucking much. I am going to give you guys the best damned (but hopefully not the last) Doomed Moviethon book possible. Giallo Meltdown will contain everything I have to say (at this time, at least) about the giallo genre and a few things I probably shouldn't say- at least not in print where everyone could read it.

I still have a big stack of zines for sale!

You must now enter... DISCO OF DEATH!

This was a long time in the making. First of all, it took me what felt like forever to acquire all these titles. Then the pure terror of actually sitting down and watching these films took over and I kept putting this moviethon off. I should have held onto that feeling for the rest of my life. When it comes to the following 14 films (watched in just one weekend), living in fear would have been much better. Please read this: Disco of Death! 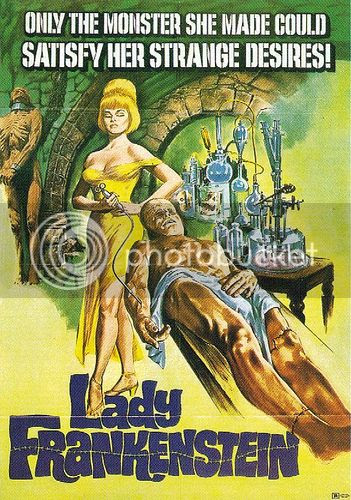 Dig on the archives, kids.