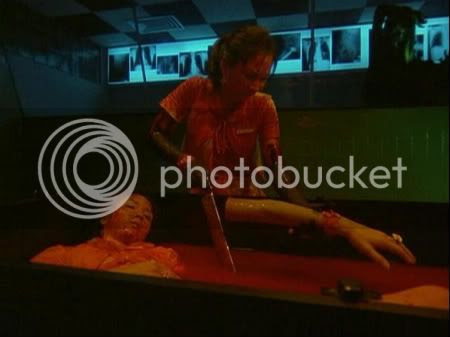 I have to throw my two cents into the glittery sequined handbag that is Nafa’s review of Sick Nurses. I started watching this flick about a year ago to test the Netflix player out on my wife's sketchy computer. Well, it played for about a minute or so before I gave up. The image kept freezing and the sound was playing way, waaay out of sync. So I turned it off. What very little I had seen of the film didn't immediately grab my attention so I forgot about it.

When Nafa mentioned the other day that Sick Nurses was still on Netflix’s Watch Instantly thingie, I was just kind of meh about it. That very day, Nafa said, “Sick Nurses, duder, you need to watch this as soon as possible.” And then he emailed me his review. I took his advice and finally watched this most fantabulous Thai flick. I quickly realized that if I had just given Sick Nurses half a chance, I could have hastened my enlightenment. Why am I so stupid?

To be a complete faux-clever goofus, I will describe this film as a free jazz remake of Suspiria by the director of Hausu while he was on a weekend bender in a Thailand hospital. But that doesn’t do this flick justice. Sick Nurses does indeed have a few little tricks adopted from Asian horror trends –the deadly long black hair being the most obvious– but it is such a colorful, smart, gore-filled, and enthusiastic (bordering on manic) jolt of insanity disguised as another typical horror film. Highly recommended.

Here's some Thai pop music for ya. Go on! You've earned it!