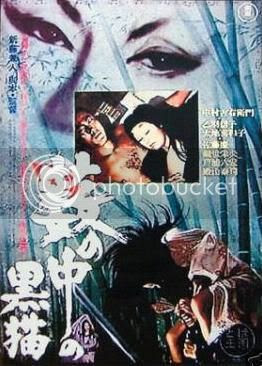 A gang of battle-hardened and starving samurai invade the home of Yone (played by Noboku Otowa) and her daughter-in-law Shige (Kiwako Tochi). The two are raped, murdered, and their house is set on fire. The two sell their souls to a black cat to gain supernatural powers so that they can get revenge on the samurai. Yone’s son, Gintoki (Kichiemon Nakamura), returns home from the war to find his wife and mother missing and their home burned to the ground. Gintoki’s boss, Raiko (Kei Sato), a powerful general, informs him that a number of samurai have had their throats torn out in the woods and he wants him to investigate.

Okay, what idiot let this film slip into obscurity? Why isn’t Kuroneko part of the Criterion Collection? Hello? Anybody? Kaneto Shindo’s masterpiece rivals his own classic, Onibaba. Kuroneko is a tragic, dreamlike, haunting, and near-perfect film full of quiet tension and bursts of beautiful madness. The sound design, the music score (a hypnotic mix of bold percussion and minimal strings), and the cinematography are all razor sharp. All of the actors are superb and turn in flawless performances.

My only criticisms are pretty nitpicky. I think the film might be too dreamlike. Out of the three times I’ve watched Kuroneko, I’ve managed to dose off twice. The plot is insanely simple so it’s not like I woke up and didn’t know what was going on. This is a sensual and eerie film filled with quiet moments that come packed with loads of foreboding. I suppose the other problem is the melodrama between Gintako and Shige and then later between Gintako and his mother. But honestly, it’s like Shakespearean quality stuff so I’m not really complaining.

The film’s black and white cinematography and kabuki theatre style direction and staging make this film feel older than it is. You might find yourself thinking that this film feels like it was made in 1938 instead of 1968 but there is always some bizarre visual just around the corner to grab you and shake you down to your core. One of the eye-opening moments in the film is when Shige is making love to a samurai and then, out of nowhere, she digs into his throat like a Shriner digs into the taco meat at Golden Corral. It is startling and it really snaps you out of the trance-like and deceptively soothing scene that has been unfurling before you.

I first watched Kuroneko on an old and beaten up VHS I checked out from the library. I loved it. Several years later, I was overjoyed when I noticed that IFC was playing it one night because I was able to replace my grubby copy with a better one from the broadcast. However, I have to say that this film not being remastered and treated with some respect is fucking bullshit. The Region 2 DVD looks pretty good but come on, it is probably going to be out of print soon. I live in America and I will not tolerate films not being available in my region!
Posted by Richard of DM at 12:16 PM