My friend Sam filmed me playing some "Guitar Content" back in November. I share with y'all and I hope you like my weird sounds. I have some wise words at the end. Please note the Napalm Death baseball cap. Thanks.
Posted by Richard of DM at 3:01 PM No comments:

Wednesday Ramble: House At The End Of The Street 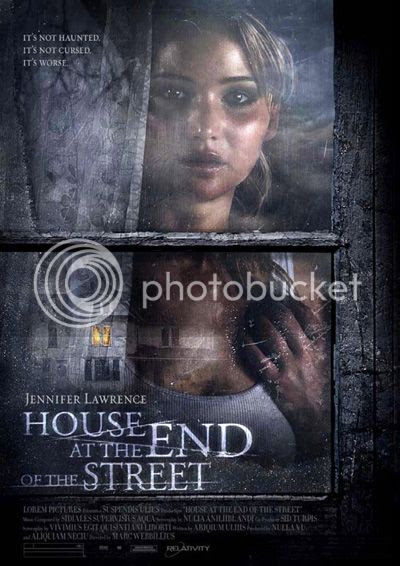 Nothing arouses me more than Powderpuff football games. Oh wait, that's for a different blog post. Anyway, so I watched House at the End of the Street and I don't know if I can review it. But I figured that since I haven't done one of these rambles for a long, long time, maybe -just maybe- I can like do whatever for a while or whatever. This is what we in the blog industry call "a great way to start".

I rented House at the End of the Street based solely on the VERY MISLEADING teaser trailer. I already know what you're thinking: "Wow, what a chump!" Look, I realize that I should have seen this bullshit coming a mile away. First things first, the whole rewinding back and forth like this movie has a cool nonlinear plot is false advertising. Secondly, the implied grittiness of the film is exaggerated. This shit is straight up suburban vanilla.

But you know what, I'm the kind of guy who owns Swimfan on DVD. Sure, I've never had the courage to watch it for fear of dying of embarrassment but I think that you knowing that I really want to watch it (but haven't in the last six years since I found it in a $5 bin) will help you understand. Or not. Like I really want to see Disturbia but I'm too ashamed to check it out. I'm not in touch with my secret teenage self. Or maybe I have an optimistic streak about PG-13 horror. Who knows?

Speaking of touching your secret teenage self, I guess I better talk about House at the End of the Street. This flick, more than any other film I've seen in a while, has all the pieces for a good film but none of them are where they are supposed to be. For one thing, the setting is great. I love suburban horror. Love it. Give me The Strangers any day. Those neighborhoods where the woods are nearby, looming. The forest has been beaten back for all these families to live and be happy but they are waiting for the day when they can come by. Trees hate us.

Next, HATEOTS has a mediocre, offbeat, and exploitable cast but fails -FUCKING FAILS- to put them to good use. I will say more about the writing of this film in a bit but for now, just know that these poor people could have wrecked this shit. But everyone is just totally disinterested in the script. And why would be into this? Really. This film takes some tired old ideas and puts a few too many of them into one film. This is not a successful mashup of Psycho-inspired plots and good old fashioned Last House on the Left-ish hucksterism. But then again, I rented it. So I guess that makes it successful.

Elizabeth Shue is good. I don't know what movies she's ever been good in but there's something about her that I will always like. Maybe it's her Shue-face. Apparently, this Jennifer Lawrence actress is some kind of a person. Max Theiriot is okay. Sure. My favorite character in the whole movie is a door handle. The door handle to that locked room in the basement gets a lot of screen time. This fucking screenplay doesn't have a single trace of quirky character traits. Okay, there's one: The dude with the dead parents drives around in his dad's Cadillac, still listening to the old cassette tapes. If there were just more weird details like that. Just pile on the eccentricity instead of oh, this girl is the daughter of a rock star; she writes her own songs! Wowee zowee! I hate to say this but could you have "Diablo Codied" this up a bit?

The first (major) misstep that this movie makes is the ubiquitous "teen party" scene. This one is pretty abysmal and feels so forced. It's like someone said, "This is a teen movie. If we don't have a party scene, the studio will shut us down." The best part is when there are all these "drunk" and "stoned" teens hanging out and drinking out of plastic party cups. Someone plays spin the bottle with a bottle of Jones Soda and I'm all like: dang, no wonder deez kids is so fucked up! There is the almost date rape and the cute puking girl. Somebody call an ambulance! How much Jones has this bitch had?!??!

Believe it or not, there are some suspenseful moments. There's lots of running around in the woods and lots of chases. It was enough to keep me watching until the hour mark. At the hour mark of HATEOTS, this shit comes to a complete standstill. I looked at my wife -who had given up on this film 55 minutes before I did- and I asked, "Why? Why am I doing this?" Oh and my favorite cliche ever: the old malfunctioning flashlight gag. Look here, fuckers. Either a flashlight works or it doesn't. Stop shaking and tapping it. PLEASE!

So yeah, fuck this movie. The people who made it came so close to something great. I would have been happy with either a grittier flick, or a weirder, quirky flick, or the insanely edited mindfuck that the trailer promised. Competent cast and crew, a decent setting, a ridiculous plot, and a thick layer of cheese. That's half my movie collection right there. Look, I've said this before and I'll be saying it forever: "The only thing worse than a bad movie, is one that is almost good." I will add to that with: "(or isn't terrible enough)".

Am I giving up on teen horror? Not a chance. 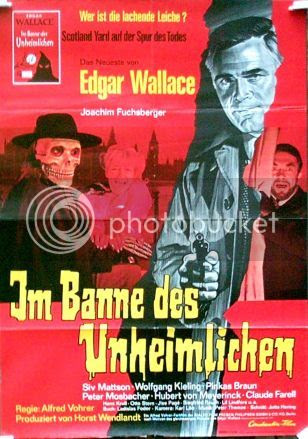 We had a little problem with our podcasting equipment and lost our intended discussion of two excellent Krimis, The Black Abbot and The Hand of Power. However, we still managed to rock out for half an episode. Brad and I also give a shoutout to the MillCreeps. Check them out! So anyway, here is the new episode. And, as always, you can check out the archives here.