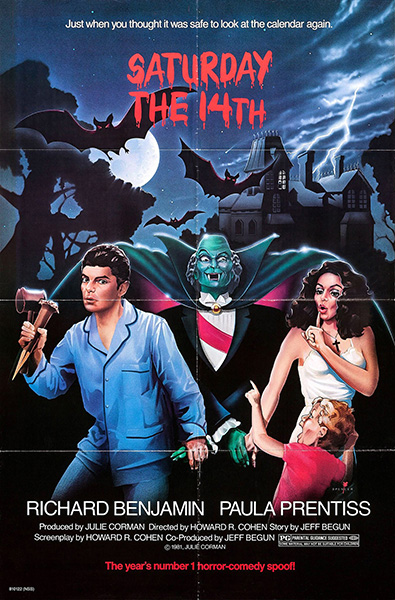 When I was 7 or 8 years old, I watched Saturday the 14th and it's always stuck with me. My guess was that this was during those early days of my family's flirtatious relationship with cable TV before renting movies took over our lives. I remembered this film very fondly, so I'm not really sure what took me so long to get back to it. So let's fast forward to 2021 and my first viewing of this very odd comedy since my younger days to see what's up.

The Hyatt family inherits a creepy and supposedly cursed old house from a distant relative, who hated them! This angers a pair of daylight vampires (Jeffrey Tambor and Nancy Lee Andrews) who were just about to purchase that very house from a realtor. They've been searching for this domicile for hundreds of years, because there's a powerful magical book inside it. Young Billy Hyatt finds the book and immediately starts flipping through it. As he does, pictures of monsters contained within its pages begin to disappear as the creatures come to life around him.

Billy's sister Debbie (Kari Michaelsen) is menaced by a dime store version of The Creature from the Black Lagoon in the bath. His mother Mary (Paula Prentiss) is bitten by a vampire bat and starts acting rather strangely. And his dad John (Richard Benjamin) is... well, he's just confused. They call for an exterminator to get rid of the bats but an exorcist named Van Helsing (Severn Darden) shows up instead. He tells them that the book, which has gone missing, will destroy the world if they don't find it soon and encourages them to combat the evil forces by throwing a party. Sure, why not?

Richard Benjamin is my spirit animal. Maybe it's a thing with Richards but I can't think of a single movie where he wasn't playing a total asshole. That is a very relatable trait for me in any actor. Benjamin appears to either not know what is going on from scene to scene or is just not committed to even trying. Funny how he retired from acting after this film. Whatever the case, I dig it. Surprising literally no one who's seen anything she's done before, Paula Prentiss steals every single shot she's in. She's great from the get go and she just makes me smile from ear to ear. After she's bitten by the vampire and runs around like a gothic wraith in her white, billowy nightgown, I'm completely smitten.

My good friend Nafa once told me that the bathtub scene where Debbie is menaced by the faux fishman was his sexual awakening and it's easy to see why. The camera lingers on her getting undressed getting into the bath a long time and I can see a young Nafa of 11 or 12 years old losing his mind over it. Thankfully, Kari Michaelsen was only acting younger in this and was actually around 19 or so when they filmed this movie. It's still creepy but yeah, slightly less terrible than if she'd been underage. Moving on.

I decided to go the cheap route and watch Saturday the 14th on Prime instead of picking up the Blu-ray, just in case things didn't go well with this rewatch. Of course, because Amazon cares so much about movies, they have the old pan and scan, cropped, whatever version and not the lovingly restored widescreen via Shout! Factory. So I got the added bonus of recreating my initial cable TV viewing of the film (AKA The Claustrophobic Cut). I'm not even joking when I say that this only added to my enjoyment of this rewatch.

My biggest takeaway from Saturday the 14th is how bizarre its tone is. Yes, it's a comedy parody of popular horror tropes but it doesn't feel like a Mel Brooks or Zucker Brothers film. Cohen's film has a unique style that is horrendous and delightful at the same time. It also feels like this film doesn't know what planet it's from. Richard Benjamin is especially good at not acting like a human being. If he had taken off his shirt and opened a panel on his chest to reveal that he was an android from Westworld (1973) the whole time, I wouldn't have been the least bit surprised. Anyway, I'm so happy that I finally got back to this daft gem after over 35 years since my first viewing. I think I loved it.

Posted by Richard of DM at 9:16 AM No comments: 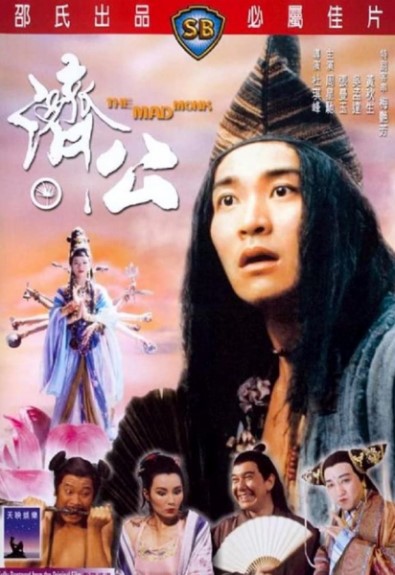