The Prople destroyed me last week by sending me a song about Doomed Moviethon.

I fucking love this.

I'm really starting to depend on Jess Franco to inspire me to write about movies. What could possibly go wrong?

The movie opens to some sexy saxophone music (or would that be sexophone?) and some sweaty faces. What more do you need to know? Okay, I guess there’s more. Cecile and Brigitte (played by Lina Romay and Nadine Pascal, respectively) are a pair of strippers (though they call themselves “perverse lesbians”) that have traveled to somewhere vaguely European in order to perform at Club Flamingo. I think their act is supposed to be a striptease but really, it’s more like performance art. Luckily, Cecile’s talents extend beyond her choreography skills because she is actually working for a US Senator (Oliver Mathot) that sent her there to expose a ring of human traffickers or dope dealers or assassins or whatever.

It turns out that Irina Forbes (played by Joëlle Le Quément) and her husband (Claude Boisson) are a pair of sicko criminals who have a helicopter and some sexy henchwomen. They have hypnotized some chick named Estrella (Doris Regina) who may or may not be Irina’s daughter to make her fall in love with Aristobolous Fargas (whoever the fuck that is). Worst of all, Irina does a strip number of her own as Salome and uses what might be a real severed head in her “sexy” act.

When Cecile gets too close to the truth, she is chased by some bad guys but is saved by a parrot. Later, someone leaves a corpse hanging in the wardrobe of her hotel room. But everything works out because Milton (Mel Rodrigo), the gay taxi driver/fixer calls housekeeping to come and take care of it. Cecile is captured by Irina and her gang but she manages to escape. Milton hides her with some hippies and- Look, folks. I could go on and on and on with this plot but I ain’t gettin’ paid for this shit. Some more stuff happens. Okay?

This movie is freakin’ crazy and the plot is beyond convoluted. And that's where the problem lies. With only about 15 minutes to go, this film slows down to explain what is going on. That was a dumb move. Opalo de Fuego does recover in time for the ending but it’s frustrating because Franco almost nailed this one. That being said, this goofy and super trashy film isn’t a waste of your time. Standout scenes include Cecile and Brigitte practicing their mesmerizingly awful stripper act and Brigitte seducing (with the promise of French Champagne) and then raping gay Milton.

"You know what women are like. They come for the discos, and hamburgers with terrible sauces and they're happy. Goodbye, precious."

Update: This got a Blu-ray from Severin Films. I think it might be a super sexy version! And they put a quote from me on the packaging. Woot woot!

I used an old Panasonic VHS camcorder to shoot this music video. I hope you enjoy.
Posted by Richard of DM at 7:45 AM No comments:

Damn It, I Missed This One 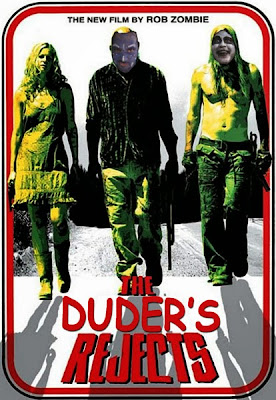 Holy snap, y'all. There is a new episode of the podcast. Nafa joins me once again for some more Robert J. Zombie talk. Fear not, Brad will return! That's a promise.

Listen to the new episode here.

Check out them there classic Doomed Show episodes!

What The Heck Did I Just Step In?

So I was rummaging around on Youtube and I found this:

Mario Siciliano, you magnificent son of a bitch! 1982 must have been a good year for you.

Also, I like how they used Carlo Maria Cordio's music from Joe D'Amato's Rosso Sangue for the "scare scenes".

Posted by Richard of DM at 8:21 AM No comments: 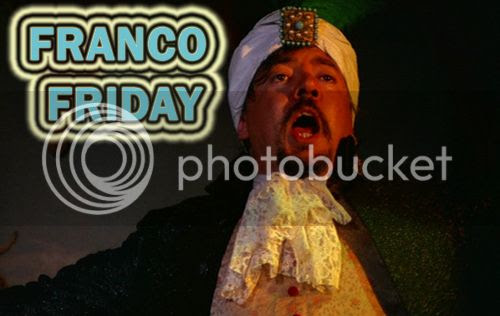 My friend Brad said something very wise recently. He said, "Take 20 of Franco's best films and they stack up against almost any other director's best work. Take 100 of Franco's films and kill yourself." I'm only halfway to the latter part of that statement but clearly, I'm on the edge already. 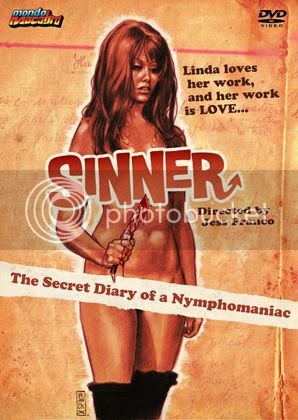 A beautiful young stripper picks up a man in a bar and proceeds to get him very drunk. She takes him back to his hotel room where he promptly passes out. Then she frames him for murder. Her own. The man is Mr. Ortiz (played by Manule Pereiro) and he is quickly arrested and put in jail. Ortiz pleads with his estranged wife Rosa (Jacqueline Laurent) to help him prove his innocence. Rosa discovers that the dead girl is Linda Vargas, a troubled young woman with a sad story to tell (from beyond the grave (but not in a zombified way)). 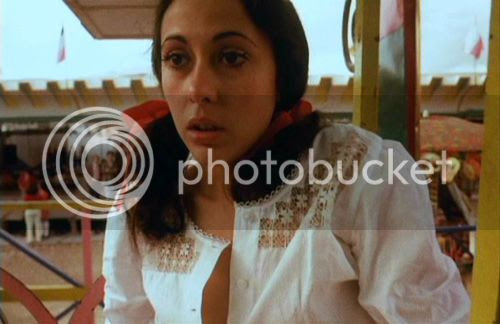 First, Rosa meets up with the Countess Anna de Monterey (played by Anne Libert), a former lover and friend of Linda's. She tells the story of how being raped by Mr. Ortiz when she was very young changed her into a nymphomaniac. Next Rosa goes to another very special friend of Linda's named Maria (Kali Hansa), a stripper and smoker of the drugs. She lets Rosa read Linda's sexy diary and it tells the wildly depressing story of her downfall. 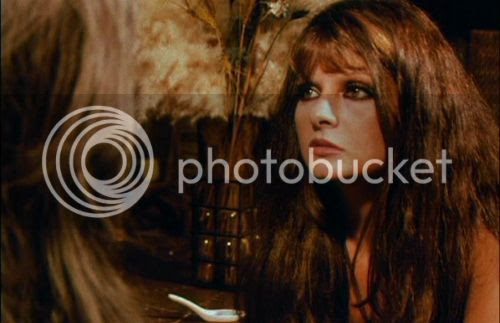 Once again, Franco paints another portrait for us of innocence lost and once again, it's another heartbreaking venture. Sinner: Diary of a Nymphomaniac is also incredibly silly with soap opera plot machinations and narration that sounds like it was ripped from the pages of a seedy romance novel. And what film from 1973 would be complete without the demonization of marijuana and disco dancing sequences?

Of course, the intentions of the writing and direction are heartfelt and meaningful. Unlike my previous complaint about Countess Perverse, rape is not just a throwaway and pointless act; nor is it sexy. In Sinner, rape and its consequences are deadly serious. Linda is an innocent whose mental stability and outlook on life is destroyed by the cruelty of a single incident. She runs from lover to lover trying to fix something that is beyond repair. 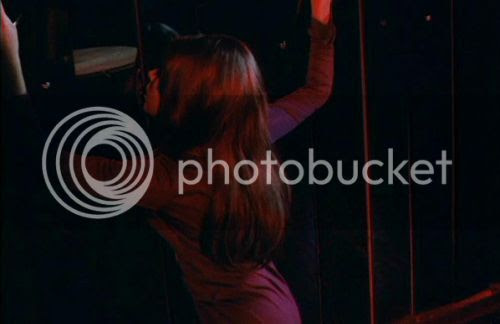 Maybe this film should have been called Surrounded by Nymphomaniacs! Although, I think Howard Vernon may be the biggest nympho of them all! I have to tip my hat to this cast. Many of the usual suspects from Franco's early 70s stuff are here and even Yelena Samarina (of Night of the Assassins and Murder Mansion) has a small part! I get the feeling that this film was meant to star Soledad Miranda but due to her untimely death, Montserrat Prous was cast in her place. Was she to be Franco's next muse? If so, what happened? Did she get cockblocked by Lina Romay? 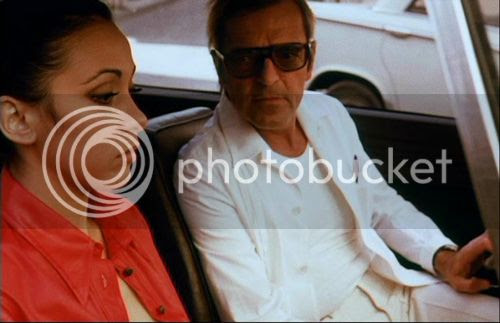 The musical score for Sinner is a lot of fun. It's got all the discordant jazz and acid rock that one expects from films of this era. The camerawork by Gérard Brisseau is quite good but not quite as eye catching as I'd expect from a film as lurid as this. Keep an eye out for an impossible-to-miss-cameo from Franco himself as a police detective. He looks into the camera for a split second as if he's not sure if they're still rolling or not. Priceless.

One thing I couldn't help but notice is how similar Sinner felt to another Franco film I've seen in terms of cast and locations. Lo and behold, Dolls for Sale and this film have not one, not two, but TEN common cast and crew between the two films (thank you, IMDB) which makes me have to assume they were filmed back to back.

"When I'm buried, they can write on the stone: 'One who wanted too much'."

Mondo Macabro does another magnificent job on one of their releases. Sinner looks and sounds great! There is no shortage of extras either. Stephen Thrower has two interviews: one about Sinner and one about the cinema of Jess Franco. Both are very good. There is an amazing interview with Gérard Kikoïne, film editor and sound engineer who worked on several Franco films. It's a fun interview and a must see for fans of European cult cinema. 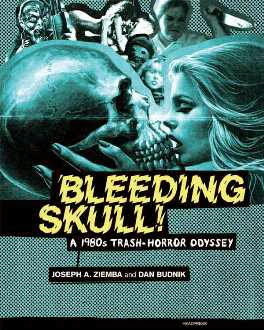 I have reviewed the Bleeding Skull! book and SPOILER ALERT: I loved it.

Check out my review.

Posted by Richard of DM at 8:30 AM No comments:

Hey gang! Welcome me to the new year!
Posted by Richard of DM at 7:53 AM No comments: