Giallo Meltdown: The Book; An Update

Hey gang! You may have noticed I've been pretty quiet lately. I know what you're thinking: "Richard is a lazy loser and has a face made of stupid, leftover butt parts!" But only part of that is true. The fact is, I've been at this Giallo Meltdown book dealie lately. The word count is currently 52,230. It is both exciting and depressing since I never could crack the 50k of National Novel Writing Month. But this is gialli we're talking about here, people. This is exciting shit! I have viewed over 115 films for the book so far and I have many more to go. Can I get a 'Hell yeah!'?

This weekend I'm going to be having Giallo Meltdown 7 and yes, it's going straight into the book and yes again, even the playlist is a secret. I have picked 21 films and I intend to get through them all. Will I ever break my record of 21 movies in a moviethon? I intend to before this freakin' book is finished. So my friends, thanks for sticking with me. I promise there will be more content on this blog from me soon. Thanks to my good friend Brad for helping out and posting some awesome shit. Some people write about movies and right now I am writing about writing about movies. Weird. I guess I better get going. Later!

Creepy House in My Neighborhood 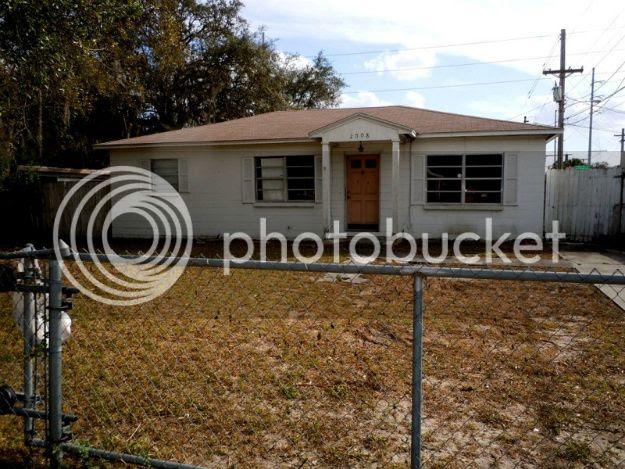 Right across the street from my apartment building, this creepy and probably-abandoned thing watches me while I sleep at night. I imagine that it is the gateway to hell AND the home of legendary murderer, Freddy Cougar. I am going to check with the wife to see if our finances are in order so that we can buy 2008 Freaky Street.
Posted by Richard of DM at 7:00 AM No comments: 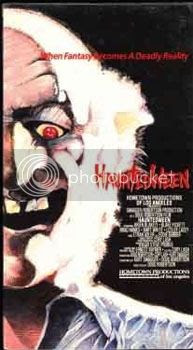 Hauntedween and I were made in the same place. But don't hold that against it. Twenty years ago, little Eddie took tickets at his families' haunted house attraction. But what he really wants is to work inside scaring people. So one night he goes inside and accidentally kills a girl. Sorta. I mean it could happen to anybody. I can't tell you how many girls I have accidentally killed over the years. I can't tell you because my lawyer says, “Blah blah blah jail.” Eddie has the right idea in running away for twenty years only to resurface when a fraternity needs a killer idea to raise a bunch of money. Eddie has a good idea. Hauntedween will tick off a bunch of items on your slasher checklist and throw in a few new ones to boot, like Eddie killing folks in front of an audience who think it's part of the performance. I can't tell you how many people I have killed during a 'performance.' I can't tell you because my lawyer says... well, see above. Add it all up and you have a slasher that is a hell of a lot of fun. Hauntedween will be released soon on DVD chock full of extras and I'll keep you posted on the date. I recently did an interview with the director Doug Robertson so keep an eye out for that. 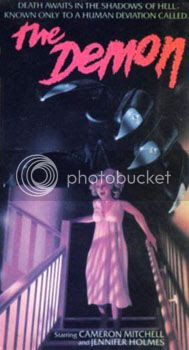 The Demon and I were released the same year. I sense a pattern forming. At some point, it seems like two different slasher films slammed together and I don't mean that in a bad way. I know this film does not have a great reputation but I like it quite a bit. Cameron Mitchell is on hand to chew the scenery as an ex-military man/psychic who is trying to track down a killer that is not a human, more than a human, and also: human. See? There's bits of Halloween here as The Demon is one of the earliest post Halloween slashers around; it's pre-Friday the 13th even. The thing (other than Cam Mitchell) that sets this one apart is that the characters aren't crazy annoying, they're quite attractive, and the stalking sequences are pretty good. I wonder if the film's crappy appearance on a slew of public domain horror film sets is part of why it is derided. Well if it is kiddos, you now have no reason to hate it based purely on that because VCI has recently released The Demon in a nice new DVD version that can be found on Amazon for thirteen bucks. But remember: Don't put your trash in my backyard. Because my backyard is full. (See what I did there? No?) 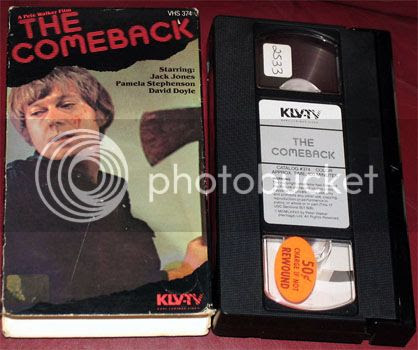 After recovering from a nervous breakdown, Pop star Jack Jones' wife wants a divorce. The thing is, she is dead and Jack is living in a haunted British manor while working on his comeback with Bosley from Charlie's Angels. Of course, someone in an old woman mask is killing folks close to Jack. Don't you want to see that? This review and recommendation is writing itself, y'all. The Comeback is directed by British horror superstar Pete Walker. Holly (daughter of Jack) Palance is in it. She also played the suicidal nanny in The Omen. That gave me nightmares. Why are you still here? Go watch it! 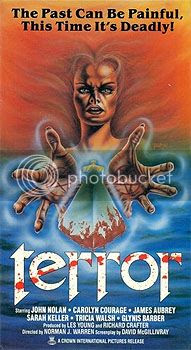 Perhaps the flipside of the British horror coin of Pete Walker is Norman J. Warren. In 1978 he made a special film called Terror. It has been called the British Suspiria. Now don't get excited by that. I mean there are some similarities but what you have here is a nice little slasher film that is colorful in a similar way to Suspiria. I mean it's not as eye-popping. But there is a flying car so it's just like Harry Potter. Scorpion Releasing has just put out a double set of this and The Devil's Men (A.K.A. Land of the Minotaur) that I recommend. I can't quite put my finger on what it is about Terror. But it's there. Believe me. 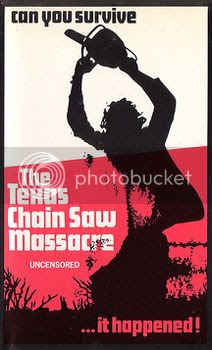 Brad, you idiot. This is underseen/underrated slashers. Everyone knows this one. Everyone. Well folks, I'll tell you who has undervalued this film: Me. I've seen it several times over the years and I am well acquainted with it's history and it's spot in every top ten horror list. I know Tobe Hooper. I'm very close to his Salem's Lot. Sometimes I have lunch with The Funhouse. I once spent an afternoon with Eaten Alive. I respected TCM but I never uh, liked it? Blasphemy! Heresy! Well, I watched it the other day and it clicked. The cinematography, the pacing, the set design, the sound design, all of it. It was like seeing it for the first time. What changed? I don't know. Why did I put it on the list? So you guys can know how stupid I am? Nope. I put it here because you, like me, may have a film somewhere out there that you didn't like. Maybe you didn't like it several times. Maybe it'll just click with you sometime. 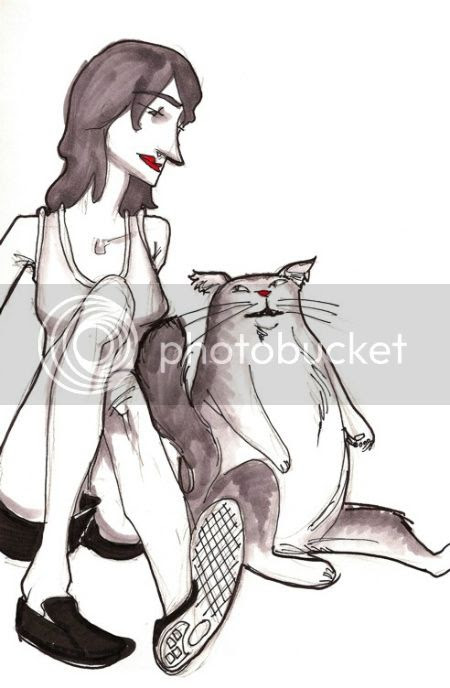 In the last six (almost seven) years of Doomed Moviethon, my wife LeEtta has lent me her skills by drawing and redrawing the official 'DM Girl' in various poses and incarnations. I like to pressure my wife into working for free but I give her my paycheck every two weeks so it all works out. Who is the DM Girl? I don't really know but I know that she is very real. The drawing at the top of this post is the first stages of a sticker design that will represent both Doomed Moviethon and Cinema Somnambulist very soon. When they actually get printed, you all will be the first to know! Also, the cat in the drawing is a very unflattering portrayal of our also very real cat named Sparkles who has attended every moviethon I've staged since 2005. 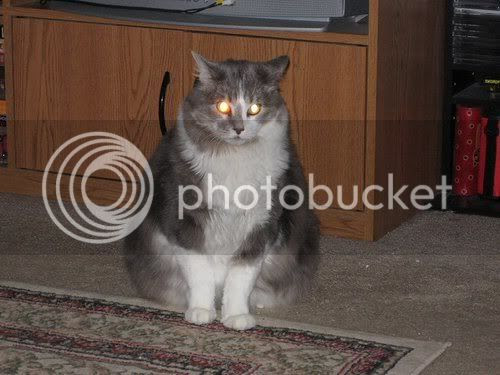 Oh yeah, Brad is back with another batch of kickass slashers for you!

Here's part one if you missed it. 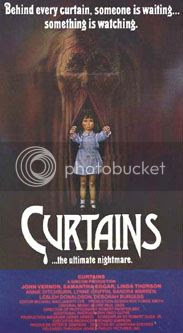 This just had it's official dvd release and it looks pretty shoddy. But I'd seek it out anyway. A group of actresses are up for a part and they all go to the director's estate to audition. Some nice set pieces, John Vernon being John Vernon, and an ice skating slash that is very nice. Oh and it appears my grandmother is the killer. Spoiler? Do you know my grandmother? I have a feeling that the director didn't call action til he was sure everyone had taken their crazy drugs. “Everyone dosed up? Okay, let's gluobertpop the shantly formago!” How do I synopsize? I won't try other than to say a girl looks for a (possibly) deceased Nazi who made rockets and discovers his very demented sons, while the doc murders folks wearing a Richard Nixon mask. That doesn't do it any justice because this film is at times funny, unintentionally funny, and downright heebie jeebie inducing. Sometimes it feels like the original Texas Chainsaw Massacre. I mean it is obviously not that good. Watch it and see for yourself. 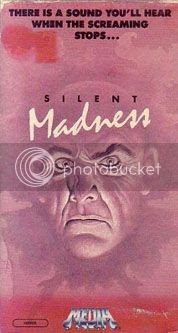 Due to a computer error a crazy killer is accidentally released from the booby hatch and goes straight back to the sorority where he murdered a bunch of people. A lady doctor (a Dr. Loomis type) goes after him while the hospital muckety mucks decide to coverup his release and send thuggy henchmen after her and the killer. So a Halloweeny slasher, a sorority slasher, and a conspiracy thriller all rolled into one! And it was in 3D! I mean it wasn't in 3D at my house but it was somewhere according to imdb. I trust imdb to do all my bookkeeping/decision making like the asylum trusted the computer to release the correct inmates. Do you see the correalation? What? No imdb. I will not do that. Not with my clothes on. 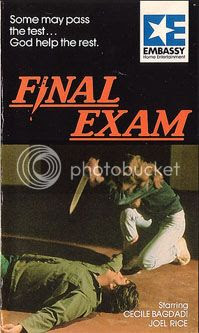 Scorpion Releasing just put out an excellent copy of this slasher from the magical year of 1981. A killer goes around killing folks. But the difference here is that we spend a lot of time getting to know the characters before the killing starts. Some folks don't like that. I do. My heart has room for lots of different kinds of slashers. The new print is nice. Thanks Scorpion Releasing! 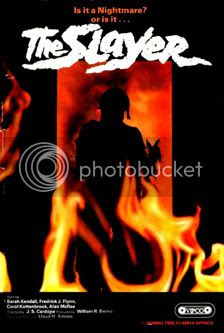 Kay and some friends go to an island for a little relaxation and something horrible starts killing them off. That something horrible seems to be connected to Kay who is an artist. And any good artist is a tortured artist. So congrats Kay. Way to go. This is a little gem of a slasher in my humble opinion. 1982 may not have been the magical year of 1981, but it certainly had its charms too and this is one of them. I will not spoil it for you.

Hello! This is the Doomed Show Episode 13 - The Case of the Bloody Iris 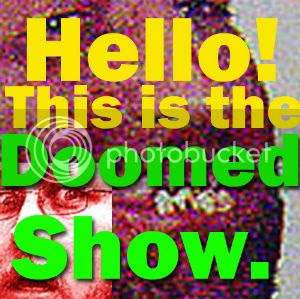 Brad and I return to the world of the giallo with The Case of the Bloody Iris. In the middle of the show, I start drinking and things turn out... Well? Enjoy the episode! You can download the episode, listen to the episode, and even subscribe to us on iTunes there. And don't forget to check out our older episodes on the archives over at Doomed Moviethon. 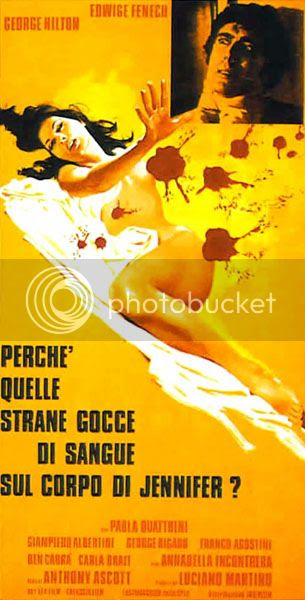