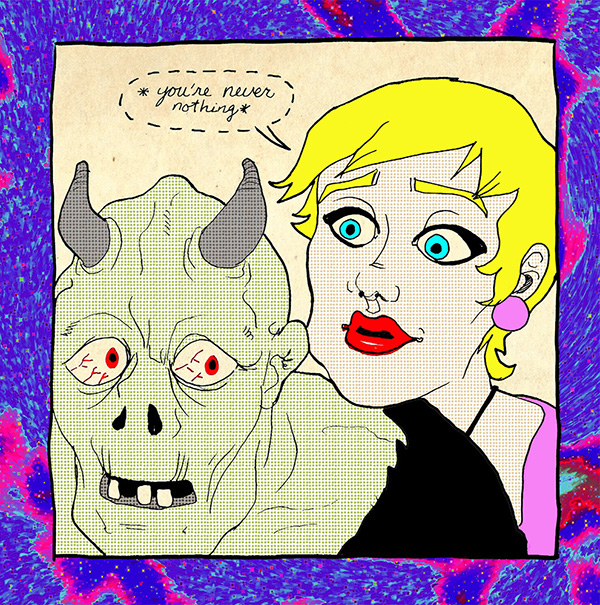 My band GYROJETS has been around for five years now. We're Tampa's premiere realistic music duo. What is realistic music? I always thought it was funny that bands were so obsessed with what genre they fell into like "post-rock", "screamo", or "reggae thrash" so I just came up with my own genre called "realistic music". At first when I told people that, Sam (the drummer and co-vocalist) would intervene and explain what kind of music we actually were. But now he's sipped upon all the varieties of Hooves Kool-Aid-flavored Slurpees and now tells people that we're realistic music as well. Over at the music blog I contribute to, I selected some bands that influenced me. Check it out!

Sam and I met six years ago on a video shoot and then through a conversation on Facebook, I found out that he played drums. We started jamming soon after and it was obvious that we had a good vibe between the two of us. Our musical interests are all over the place -dare I say, wildly divergent- but there's a common ground sonically which is the glue that keeps our soul-brains stuck together. We are friends first and bandmates second which I think is extremely important. We spend more time talking at band practice then actual practice.

After a few random nights of jamming, we decided to give our duo a name. The names that didn't make the cut are as follows: Only Nero, Faux City Locals, Rigid Parts, Nock Volley, and Proud Papa. In desperation, none of these seemed quite right, so I thought, "What are the worst firearms in history?" Sure enough, the Gyrojet was on every list and they certainly looked ridiculous enough. Thus, GYROJETS were born. We've tried to invent a world where things like haunted pizza exist alongside cat-snakes and toothpaste toast and according to my notes, we've been wildly successful.

Want to hear all of this excitement? Check out our album on Amazon or Spotify! It's great. We worked really hard on You're Never Nothing by recording everything ourselves and begging, pleading, and also asking my wife LeEtta to draw the cover and inner CD artwork for us. That's right, I said CD (Compact Disc)! This is the 1990s and it's still a viable format. Anyway check out my wife's artwork on her site.

So what does any of this have to do with movies? I'll tell you! We have a song about a very special character from Lucio Fulci's The House by the Cemetery called "Ann the Babysitter". But wait there's more! We also have a song about VHS tapes and an accompanying video that you should check out below. I also threw in a recent live clip. We played at a club famous for its beer and brownies. And hey screw it, there's another live clip just for fun in there too.

Posted by Richard of DM at 2:38 PM No comments: