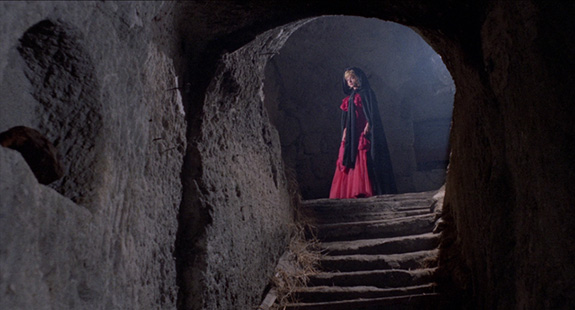 I get The Vibe (AKA that Euro-horror vibe) a lot from Italian and Spanish horror where they frame the characters in certain ways or have this perfectly plain location that is rendered terrifying or haunting just by the way the filmmakers choose to light it. The composers have a lot to do with it as well. Morricone, Nicholai, Cipriani, Pisano, etc. Their music, especially the prettier melodies, juxtaposed with the promise of the upcoming horrors are also effective at giving me the same feeling.  Of course, huge credit goes to the writers and directors of these films because without their stories and direction, I'd never have discovered all of this dark joy.

I often struggle to describe the feeling I get from these films. But the Vibe-y sensation is a melancholic invigoration, a creepy floating sensation, or a caffeine rush of morbidity. It's definitely a sharpening of the senses with a big dash of euphoria thrown in. Usually, I find myself creepily smiling, cackling, or just tearing up when The Vibe hits me right. There aren't any specific films where The Vibe is throughout the whole movie. However, there are a few examples where large sections of the film do the trick though. The House by the Cemetery, Phenomena, Death Smiles at Murder, Anthropophagus, Lisa and the Devil, Vampyros Lesbos, and Horror Rises from the Tomb, just to name a few, are great providers of The Vibe.
I try not to repeat myself too much on this blog. Ha ha! Yeah, right! But I was having a convo with a friend about this subject and wanted to post the above paragraphs without looking at my original post on the subject from 11 years ago. So I guess this is kind of a mission statement for what I look for when I'm going into a film from this era/these countries. I will likely come back to this topic in another decade or so.
Posted by Richard of DM at 1:34 PM No comments: 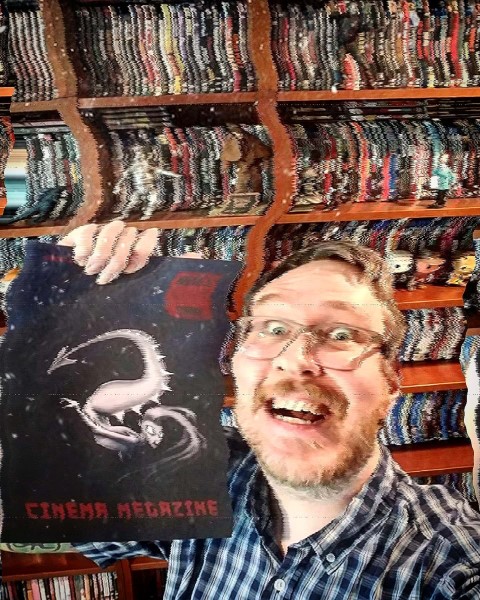 Usually in these top 10 of the year posts, I'm all about a long and rambling diatribe about what I was up to all year long and fun things that happened. Well, I've been doing what you've been likely doing yourself. I've been keeping my head down, staying away from everything, watching stuff, and staying creative. I also had two (make that three) book projects going right now that will hopefully make your ankles tingle in 2021.

There were a couple of neato things that actually happened like getting one of my reviews in Weng's Chop Cinema Magazine (pictured above) and some cool podcast cameos (check out the links below) that I was lucky to be a part of. I released an album of super chill ambient music to help folks relax in these awful times. I'm super proud of how that one came out. Give it a listen if you need a nap. To sum up, I have stayed mostly sane. Otherwise, last year was dumb as balls. Moving on...

Opera Omina - The Duke of Burgundy

It Came From The Shed - Broma of Souls 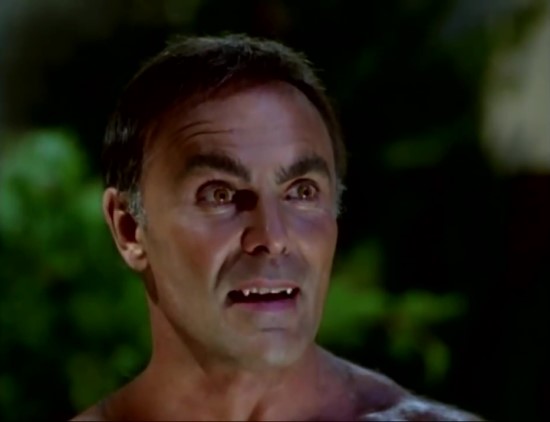 For 2020, I was kind of doing a half-assed "I must watch more movies than last year" goal thingie and I was surprised to see that I'd actually done it! In fact, I watched over a hundred more movies than last year. A human being like me is filled with pride because it means that I sat on my butt for a long time. That's cool. So for 2021, my goal is to watch over 500 films. Wow. That doesn't seem intimidating at all. Let’s look at those totals for 2020.

10. Razorback (1984) - I can't believe that I avoided this damn film for so long. What a silly waste. For real, the only thing holding me back was that it just didn't sound like something that I would be interested in. Boy oh boy, I was so utterly wrong. I can't recommend this one enough. Back in June, I did a week long event where I watched Australian movies every night. It was frickin' wild. You can read my review of Razborback here.

9. Time Walker (1982) - During the Unseenly Moviethon 2, I watched this wacko sci-fi slasher and it blew my dang mind. It is ridiculously silly and entertaining as all heck. I watched nine movies in a row that day and that one (and the next film in this list) really stood out as a new favorite.

8. Dracula A.D. 1972 (1972) - Speaking of that moviethon, here's another film from that day that I knew existed but had never gotten around to. Unholy hell of Satan, I was missing out! This shouldn't have been a big surprise to me since The Satanic Rites of Dracula (1973) was in my favorites for 2019. What the darn heck took me so goshing dang long to get around to these films?!

7. Vamp (1986) - For years, I was under the impression that I had seen Vamp. On a whim, I bought the Arrow Blu-ray and was quite surprised to find that nope, somehow this little gem had escaped me. It quickly became a new favorite. My only criticisms are that Grace Jones doesn't have any dialog (nitpicky because she doesn't NEED to speak but I wish she had) and the craziness does slow down for just a few minutes. Those are minor quibbles. Love it!

6. Massacre (1989) - I am fairly confident when I say that this will be the stupidest film in my top 10. Sorry, Time Walker, don't be sad. You did your best! Andrea Bianchi really came through for me with silly bullcrap with the "Lucio Fulci presents..." tag on it. Packed full of cheap horror crud and half-assed giallo elements, Massacre is dangerously dumb and I hope it gets a Blu-ray soon. You can read my review right here.

5. American Rickshaw (1989) - And speaking of Italian strangeness, here's one that is as strange as they get. To say that I had underestimated this Sergio Martino jam would be an understatement. I can honestly say that even after all of the Italian genre cinema I've beheld with my vision sensors, this one is a truly unique experience. Don't look up anything about it, just watch it. Or read my review because you are the boss of you.

4. The Snake Girl and the Silver-Haired Witch (1968) - During my The Invasian theme month back in September, I saw so many amazing films. But this one really blew me away. It's the most like an old school horror manga come to life as any Japanese horror film that I've seen. It's truly nightmarish, fun, and totally bizarre. Director Noriaki Yuasa was best known for his work in the Gamera film series. I'm so glad this little gem is floating around out there in the ether. Hopefully, it'll get a proper release on home video in the States.

3. My Mom's a Werewolf (1989) - In my wife LeEtta's and my continued quest to find more good (or goodish) movies with Halloween sequences, or that take place on Halloween, we finally got around to this thing from the director of Death Spa (1990). This rates so highly in the top 10 this year for being so damn entertaining and more importantly, being watchable. I cannot wait to make this part of our October viewing next year.

2. Luz (2018) - As you can see from my almost faves list below, I got myself a Shudder subscription last year. I have wanted Shudder since it started but there was one thing that pushed it over the edge and that was Luz. Just based on the trailer and the poster, I was like I need to see this film. As soon as I'd heard that it was on Shudder, we ditched Netflix and got Shudder. Luz is so odd and so energetic that I just can't even process it fully yet. I even bought the soundtrack on vinyl because because because because. Just to add to the confusion, Shudder has added a film called Luz: The Flower of Evil (2019). Haven't seen that yet, but I'm guessing that this Luz is still the way to go.

1. Gretel & Hansel (2020) - And here we are, the number one spot. I have been over the moon with Osgood Perkins since I saw I Am the Pretty Thing That Lives in the House (2016) and The Blackcoat's Daughter (2015), in that order. So, of course I was chomping at the bit to finally see something he did on the big screen. Gretal & Hansel did not disappoint and I loved it so much that I saw it twice in the theaters. In fact, I think that it's the last film I saw in theaters before all the bullcrap started. Dang. I love this magical film so much and I want to watch it again right now while I'm writing this. 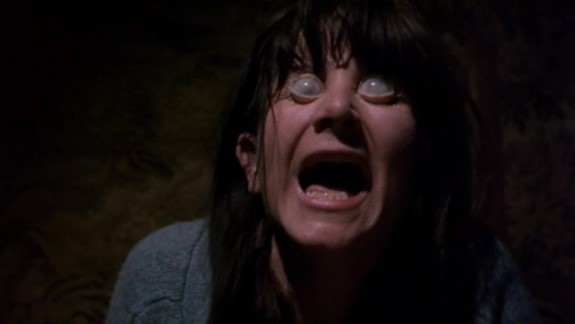 When you see the films on this next list, you may be wondering how come they didn't make the top 10 list. Or you're like "What the hell is that animated Addams Family doing in there?!" Yo. Just being honest, pal. Anyway, when I'm battling to make these lists, the tie-breaker is usually the question, "Do I want to watch this again right now?" So while there's lots of strange and wonderful things in the following list that need mentioning but if I don't see them again for many years, I'm okay with that. That being said, I recommend that you check out any of these.

Posted by Richard of DM at 8:00 AM No comments: