I like lists and I know for a fact that Brad of Hello! This is the Doomed Show and Yellow Razor likes- no, loves them too. We make lists together and here is a list now. Listy list. LIST LIST LIST. Since the 90s were so great and the horror movies from that era were better than any other era in the history of mankind, I thought we should talk about some American horror films from that era. And hey, why not put that discussion in list form. Here is Brad's top 5 and you can read mine over at his blog. Word up. 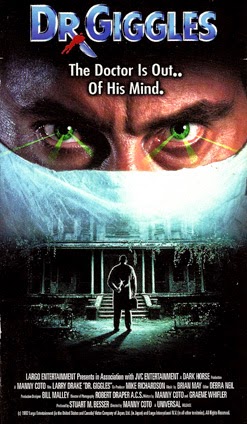 Some of you may be confused as to the inclusion of Dr. Giggles on my list, even at #5. But this is exactly what a 12 year old undiscerning horror film fan loved in 1992. A good back-story, a weird, giggling antagonist, and a creepy hospital set piece delivered the goods. Yes, re-watching it doesn't elicit quite the same response but it's a good memory and it kept new horror alive for me in my early VHS rental days. I'm not even going to say guilty pleasure because I do return to it from time to time. And there's that scene. You know. 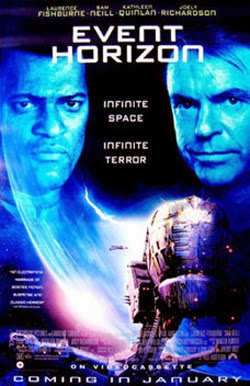 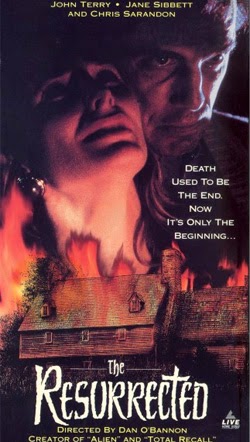 This is a little gem from Dan O'Bannon who didn't direct nearly enough horror films in my opinion. Probably the best straight up Lovecraft adaptation out there for my money with a great performance from Chris Sarandon. Even though I think it's well directed it does have the look of a nicely made cable film of the time. This was one I half remembered for a long time before I stumbled across it on Netflix. Based on The Strange Case of Charles Dexter Ward it plays like a neo-noir that wandered into a horror film. Highly recommended. 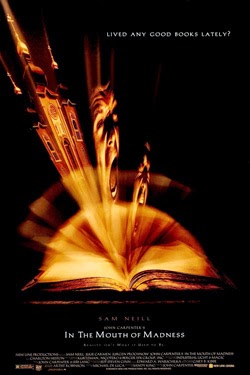 2. In The Mouth Of Madness

John Carpenter's last great film and the only one of his that I've seen in the theater. My friends and I saw this and Event Horizon both and we decided that there was something very wrong with Sam Neill. And we hadn't even seen Possession yet. This is Carpenter's take on Lovecraft and it works on several levels, one of them being 'meta' right before that was trendy. Bravura editing and Carpenter's trademark widescreen picture plus Neill's slowly descending into madness acting and some genuinely squirm inducing effects makes this a winner for me. Do you read Sutter Cane? 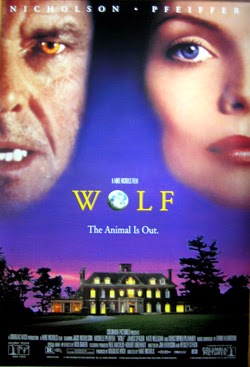 I think it's safe to say that from the moment the trailer hit television, we were all excited for what promised to be the definitive werewolf/wolfman picture. The chemistry between Jack Nicholson and Michelle Pfeiffer burned through the screen like no other coupling in film history. Years after his groundbreaking horror films The Graduate and Working Girl, director Mike Nichols delivered...Nah, I can't do it. I mean The Blair Witch Project is my number one film from the 90's, right? A masterclass in suspense and not looking the horror directly in the eye, opinion on the film is still split today. Released not too long really before everyone had a cell phone and internet and Facebook, the film delivers one of the last looks at true myth making unencumbered by post modern skepticism. You don't have to actually see the witch herself to be scared. Your brain can fill in the blanks. And that is terrifying.

Well well well, look who is back on the blog. Surprise! It's me and Franco! Or Franco and I if you're a grammarian. Since I haven't reviewed all 201 of Franco's films just yet, I thought I should at least try to do one more. Shit, it's been 6 months since I've been up for something new from Old Jess. But here's an oldie but a goodie from the man himself. Read on, my friends, read on! 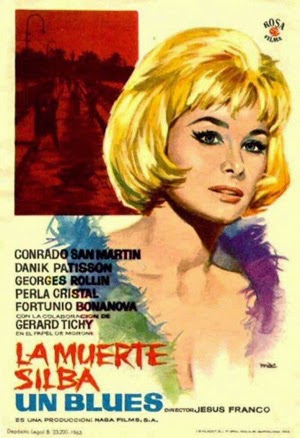 Part-time musician and accidental smuggler, Castro (played by Conrado San Martín), gets busted at a checkpoint for hauling guns and ammunition which he didn’t even know about. His friend, Julius Smith (Manuel Alexandre), also unaware of their cargo, is shot and taken into custody while Castro is shot as well while attempting to flee. 15 years later, Julius Smith sees Castro's wife, Lina (Perla Cristal), in a nightclub and performs "The Roof Blues", she and Castro's favorite song. Smith is run down by a car very shortly after that, confessing all he knows to the police before he dies. This gets the ball rolling as Castro returns to get revenge on Vogel (Georges Rollin), the man who ratted him out, profited greatly from the gunrunning, and even stole Lina. Castro, whom everyone believes to be dead, can't take anymore of this bullshit.

Vogel has been living under the name Paul Radeck for the last decade and a half and pretty much owns a small seaside village. A cryptic letter from Castro saying that he not only knows Radeck is actually Vogel but he has returned to take him down with his own secrets. On the case is Inspector Fenton (Fortunio Bonanova), he uses an undercover sexy lady named Moira (Danik Patisson) to get close to Radeck but her cover is blown ridiculously fast. Now everyone seems to playing their part in Vogel’s little paranoid game as he tries to rub Castro out once and for all. But hold on! Not so fast, motherfucker. More secrets and twists will be revealed before this story is over. 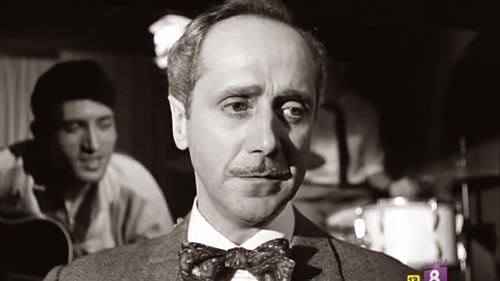 La Muerte Silba un Blues is an engrossing but very relaxed noir crime film filled with equal parts melodrama and style. The music by Music by Antón García Abril is vibrant, classy, and never dull. This black and white film features some excellent, creative cinematography by Juan Mariné. The composition of the frames and the lighting are just wonderful and I can’t even count how many of his shots are my favorites in this film. The screenplay that Jess Franco wrote with Luis de Diego is a little hokey but is intriguing and nicely nuanced at the same time. All of the characters, especially Lina and Vogel, are well written and multidimensional; and the cast is just so damn good that I was very invested in their stories. 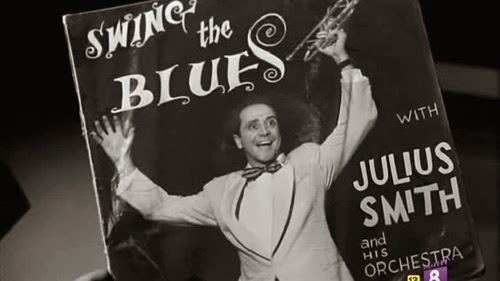 When you’ve been watching as many Jess Franco films as I have and you've been watching them out of order as I have AND you also keep half-intentionally forgetting everything you’ve ever read about the man’s work as I have, well you tend to get surprised a lot. All of a sudden, the very first Franco Friday, Kiss Me Killer, makes perfect sense. If nothing else, Franco was The Great Recycler of his own works and he returned to La Muerte Silba un Blues for a reason: it is one of his best films. 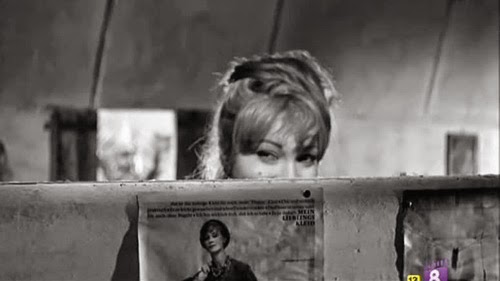 The use of Smith’s song, “The Roof Blues”, to drive Vogel bananas works great. I love the way Vogel is introduced, lounging by the pool with the wind blowing around him, trapping him in the loneliness of leisure. The life he’s built for himself is all a lie and he knows it. The character of Castro, as portrayed by Conrado San Martín, is awesome. He’s just a happy-go-lucky guy with a whole dimension to him that I won’t spoil here. He makes friends with a black fisherman named Joe (played by Joe Brown) and these two actors have great chemistry onscreen together. 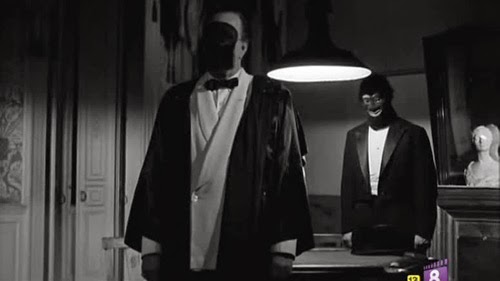 Now I won’t be returning to this to rewatch La Muerte anytime soon. Heck, I may never watch this again –because it’s just not my style of film- but I’d be an idiot to leave without saying how impressive this film is and how entertaining. Granted, this was Franco’s tenth feature length film so it’s not hard to imagine that he could have his hand in something this good. Of course, there are aome quaint gaffes like jump cuts and out-of-focus moments that became Franco’s signature to nearly all of his later films but honestly, you won’t care when you sit down with this one. The only thing I could find to criticize the film for is the damn disguise that Castro chooses for the big costume ball finale of the film. It is mind-bogglingly racist. Oh well, can't win 'em all, I guess. Keep an eye out for the director himself as a saxophone player near the beginning of the film.

“A dead hero is more interesting than one hundred mediocrities alive.” 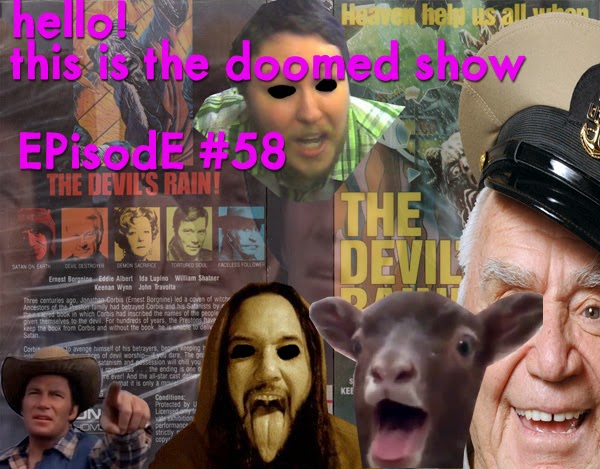 My good pal Nafa returns to the show for some more Shatner-talkin' as we explore the Faberge TV magic of The Devil's Rain. This movie is nuts, there's not much to it, and it is infinitely crazier than it thinks it is. Can a movie think? Anyway, listen to the new episode RIGHT HERE or check out old episodes with Nafa (like Impulse or The Devil's Rejects) in the SHOW ARCHIVE.
Posted by Richard of DM at 7:01 AM No comments:

"Doomed Moviethon" by The Prople

I managed to get out of the house long enough to see The Prople live! I was able to shoot some video of them and then immediately crawl back under my rock to make them a music video for their song, "Doomed Moviethon". Apparently, it is about Doomed Moviethon! I can't stress enough how honored I am to have a song dedicated to my friggin' website.

More from The Prople right here. Like them on the Faceplace.

Posted by Richard of DM at 9:20 AM No comments:

Posted by Richard of DM at 3:35 PM No comments: