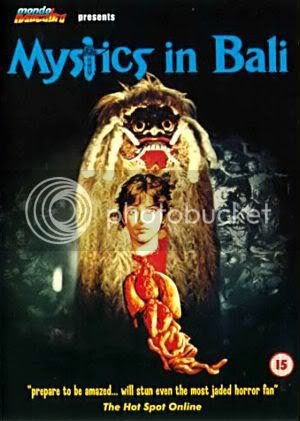 Cathy (played by Ilona Agathe Bastian) wants to learn Leak (pronounced “lee-ack”) magic for her book on black magic. Her boyfriend Mahendra (played by Yos Santo) introduces Cathy to the Leak Queen (Sofia W.D.) who begins to teach Cathy the ways of Leak. Mahendra starts to worry about his girlfriend so he approaches his uncle Machesse (W.D. Mochtar), a white magic mystic who can has the skillz to counteract the evil queen’s powers. Once Cathy is well versed in Leak magic, the Leak Queen uses her to suck blood from unborn babies so that she can achieve immortality. Mahendra and Machesse step in to challenge the Leak Queen before Cathy becomes her slave forever.

First things first, don’t watch Mystics in Bali alone. For the rough spots full of meandering, hilariously dubbed characters speaking outrageously stupid dialog, you will need a friend or three to lend their heckling support. The other reason you’re going to want someone else around while you’re digging on this Indonesian freakout is that you will feel, with some intensity, an urge to show Mystics in Bali to somebody, anybody, just so you’ll know that something this insane really exists. Did you eat a Buffalo chicken sandwich with sweet potato fries dipped in wasabi mayonnaise too soon before taking nap or did you actually just witness this film in real life? You will need confirmation, trust me.

Director Djalil is known for some pretty outlandish films like Lady Terminator and Dangerous Seductress. One of the things he’s not known for is a cohesive story and interesting characters. Performance wise, most of the cast of Mystics in Bali are terrible but the dubbing is so bad that it hardly matters anyway. Take, for example, Ilona Agathe Bastian. She is not charismatic at all and is actually rather homely. Not that an attractive woman would have done any better in the role but jeez, there are some scenes that require at least a baseline level of sexiness. At least prolific actress Sofia W.D. shoots it out of the park with her insane portrayal of the blood-drinking and jewel-licking Leak Queen.

Mystics in Bali is grotesque, macabre, wildly funny (thanks mostly to the script*), and just plain nuts. Oh and it’s confusing too but the film is dumb that it will make you feel embarrassed for being confused. Any movie that feels a little slow at less than 90 minutes and also introduces new characters DURING THE CLIMAX has got some problems. And yet, it’s all worth it if you like schlocky foreign cinema. The silly synth-driven music score, disturbing transformations sequences, flying heads with guts hanging from the neck-hole, talking fireballs, and dubious special video effects, will warm your cold, lifeless heart. So make sure you and your drunken friends check out this mesmerizingly weird film. You will/won’t be sorry/glad you did.

*My favorite moment in the movie happens right after Cathy pukes some green stuff and a couple of very confused, and very much alive, white mice. She talks about how she dreamed that she was at a banquet eating strange food. Mahendra suggests that perhaps she just ate something that upset her stomach! Trust me, every time I swallow live frickin’ mice, I feel a little funny in my tummy too.

“Mm, delicious! This is good blood!”