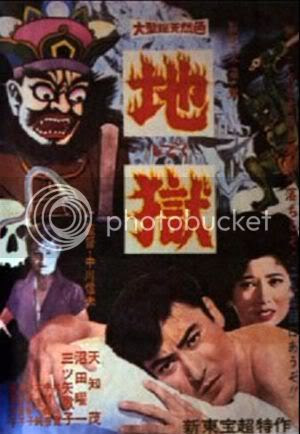 [There are some minor spoilers in this review that I don't believe will affect your enjoyment of this film. Honestly, I’d rather you go into this one completely blind and experience it for yourself. But hey, I’m a blogger! I got kids to feed? Wait. Who do I work for? Could it be… SATAN!??!! It’s not Satan. Satan isn’t this cruel.]

Shiro Shimizu (played by Shigeru Amachi) has got some real problems. While hanging out with his “friend” Tamura (Yoichi Numata) one night, he takes part in the hit and run of a gangster. This gangster’s mother (Kiyoko Tsuji) witnesses the crime and vows her revenge on both Tamura and Shiro (even though he wasn’t driving) with the aid of her son’s girlfriend Yoko (Akiko Ono). As if this weren’t bad enough, Shiro’s fiancée Yokiko (Utako Mitsuya) is killed in a taxi accident the night she was going to tell him something very important. While falling into Yoko and the gangster’s mom’s trap and shunned by his future in-laws, Shiro gets a letter from home that his mother is dying.

While his mother (played by Kimi Tokudaiji) lay dying in a cheap and corrupt rest home, Shiro’s father (Hiroshi Hayashi) is living in the next room with his mistress. Shiro meets Sachiko (Akiko Ono again), a girl who reminds him an awful lot of his dead fiancée and who he immediately has a crush on. She lives at the rest home with her drunken artist father who sells his paintings of hell to get by. Tamura shows up in town to cause more trouble for Shiro as does Yoko and the gangster’s mom. Someone serves some bad fish at the rest home’s tenth anniversary (plus there’s a bottle of poison sake going around) and next thing you know, pretty much every single character we’ve met up to this point goes straight to freakin’ hell.

But wait, there’s more! Now in hell, Shiro discovers some disturbing revelations about his family and is forced to face all of his earthly sins. Oh and Enma, the king of hell, is going to get his money’s worth torturing him for all eternity. In the underworld, Yoko reveals to Shiro that she was going to tell him she was pregnant the night she died and that their unborn child is trapped somewhere in hell. Our whiny miserable “hero” decides to get his shit together and go rescue their child so that she won’t suffer along with all the lost souls who totally deserve to be there. But will this young man’s will be enough to challenge the will of the king of hell? Wait, why is Sachiko in hell? She’s a nice girl? Oh man, why is there a river of pus and excrement? That’s just nasty! These questions and many more are answered in Jigoku!

What’s the most fun you could ever have going to hell? With legendary wacko director Nobuo Nakagawa’s 1960 film, Jigoku, you silly! The cacophonous and sensual opening credit sequence alone is enough to make this one of the strangest film about H-E-double hockey sticks. Jigoku is as much about the tortures of hell as it is about guilt and what spectacular failures human beings are. There’s also melodrama so overwrought and irony so ironic it’s almost too ironic for me to even be talking about it. Either way, I bet you haven’t seen anything quite like this before.

I’ve rarely enjoyed a movie that was this hard to sit through. Its two sections, the earthly plane and the world of hell, are both filled with agony and misery. The second half just has more screaming. The feeling of dread is excruciating as everything just keeps spinning out of control. Lives are wrecked and people just keep making stupid ass choices that land their butts on the griddle. The tortures awaiting them, though cheesily staged, are brutal. There’s a demon whose job it is to smash yer dang teeth in. Hey, it’s a living! The compositions by cinematographer Mamoru Morita are striking and the film’s wild score by the prolific Michiaki Watanbe is simply mind-blowing.

All of the actors are totally devoted to this piece of insanity. You know you’ve got an excellent cast when the viewer is willing to die and go to hell with them. And it takes a great actor to make an unpleasant character into a fascinating portrait and that is just what Shigeru Amachi does with Shiro. The funniest aspect of this character is how he is a magnet for women. Yukiko, Yoko, Sachiko, and even his father’s mistress, all go for this friggin’ guy.

However, for me, the shining star of Jigoku is Yoichi Numata (of Ringu). I think it was around the second time that Tamura materialized out of thin air that I realized this character had a little more up his sleeve than just a sleazy prankster. It is quite clear that this roguish gentleman is a catalyst for a sin, a mad soul from hell on an unholy mission, a total dickweed trying to make everyone suffer as much as he, etc. Numata’s performance is wildly over-the-top, spastic, and totally perfect.

Is Jigoku a classic film? Oh yeah. Is it also shrill as hell (really, duder, like "hell"?) and a little (read as: a lot) exasperating during some of its running time? Mm-hm. It’s a fairly obvious art movie that is trying to hide behind its tawdry tapestry of misery and horror. I urge you to watch this film as soon as you can but I must warn you: You will go to hell and your screams of perpetual torment will go unnoticed in the chaotic din of eternity. Bring your friends! Jigoku is a great date movie as well. But you're not getting laid after it's over.