Don't Cry For Me, Argento

So I'm trying to figure out how Dario Argento fits into my plans for NEHF. Argento's output since 2001's Sleepless has been all over the place in terms of quality. The only thing I really hate from the last decade is The Card Player. Most Argento films get better with multiple viewings. This is not the case with The Card Player which grows more and more annoying every time. Video poker, ladies and gentlemen, video poker. And that's all I'm going to say about it.

Argento's contributions to "Masters of Horror" are okay and his newest, Giallo, though quite dumb, is a wildly gory, entertaining and visually striking film. Why does this director keep making police procedural movies when he clearly has no interest in police procedure? I've only watched Giallo once and I have to say that it's a bad movie but I can't wait to watch it again. It is certainly no worse than a 70s giallo. Argento fans know that the man is past his prime and isn't likely to make another Suspiria. After Opera, the director's style completely changed. If one looks at his contribution to Two Evil Eyes and Trauma and then tries to compare it to Inferno or Tenebre, you'd think it was two different directors.

For my money, Argento's last truly great picture was The Stendhal Syndrome though Sleepless is pretty dang awesome. His films may be dropping off in quality but I will always make a case for the guy for two reasons: 1. he's Dario frickin' Argento and 2. he's alive and is still making Italian genre flicks. Now I'm not saying that his films can't be bad or can't be criticized but I'm of the opinion that I want more. Even though some of Lucio Fulci's final output is pretty miserable, I'm still glad these films exist. I wish the late Joe D'Amato had never gone into porn because I want another Death Smiled at Murder. As long as Argento keeps going, I'll keep watching.

The reason I'm getting all worked up is due to a round table discussion on Dario Argento's The Mother of Tears in Video Watchdog #147. Film critics Maitland McDonagh, Tim Lucas, Kim Newman and others rip on Argento's long awaited conclusion to his Three Mothers trilogy which began in 1977 with Suspiria and continued in 1980 with Inferno. This was a pretty lively discussion and I highly recommend that you pick up the issue but I couldn't help but feel just a little sting of annoyance with the crew. Comparing Argento of 2007 with the Argento of 1980 is pretty foolish. Expecting the director who released his craptacular version of Phantom of the Opera on the world in 1998 to make a significant follow up to his best work after a 27 year gap? Really? No, you shouldn't do that. Let's look at The Third Mother for what it is: an Italian horror film.

And what do all Italian horror films, from Bava to Fulci to Deodato to Argento to Freda to freakin' Bianichi, have in common? They are all ridiculous. They have silly shit goin' on in their movies. Dario Argento is one of the silliest directors in the world. Every single one of his movies has at least one of the following cheesy elements: a goofy plot, bad dubbing, awkward scripting, a monkey with a straight razor, pseudoscience, fractured logic (mostly intentional), etc. But this is part of what makes him so magical. The first time I watched Suspiria, I laughed my ass off. It struck me as exceedingly bad and campy. It wasn't until months later that a revelation hit me: I had to watch this movie again. These films get under your skin and a single viewing is never enough. How many other directors do that?

Dario Argento takes potentially boring and very silly material and makes it fun to look at. He almost always takes us on profoundly morbid journeys. And at nearly 70 years old, duder is still making horror movies! If he makes 50 more terrible movies before he retires, I'll be happy as hell. Granted, he is involved in a musical version of Deep Red and a rumored American remake of Suspiria but still... You can't honestly tell me that The Third Mother has nothing going for it. I've watched this movie and it is awesome. It's ridiculous, over-the-top, and it just works. I'm not saying it's a good movie but it beats the shit out of The Card Player, Pelts, Jenifer and Do You Like Hitchcock? (which I liked).

My biggest problem with Argento is that Tenebre should have been the final Third Mother film. As great as Tenebre turned out, it should not have been a giallo. From what I've read, Inferno was something of a flop (or at least a disappointment and there were a bunch of problems during production) and Argento wanted to switch gears. But the screenplay for what would become The Third Mother almost 30 years later was near completion when Argento abandoned it. I'd call this a grave tactical error. Even Luigi Cozzi saw this as a problem and made his own Third Mother film. It didn't work but bless him for trying.

Okay, I have no idea where I was going with this so I'll pick this up some other time. 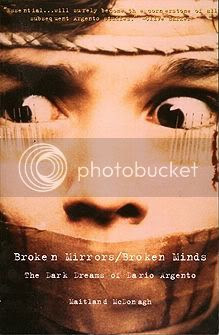 Written in 1991, Maitland McDonagh's book is a stunning examination of Argento's work from The Bird with the Crystal Plumage through Two Evil Eyes (though a 1994 afterward in the American briefly discusses Trauma). If you haven't read this one yet, you should totally dig on it. I haven't been able to put this book down since I started reading it (I have about 90 pages left). Looks like it's getting a reprint in February of this year. Hopefully, there will be some updates. I'd love to see what the author has to say about everything from Trauma on. 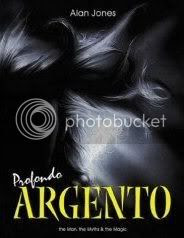 And while I'm on the subject, there is also Alan Jones' Profondo Argento book which is a pretty bizarre (though essential) read. There are some annoyingly sycophantic moments in this book, particularly in the set visits which as the years go by look very silly. In an effort to get kids psyched about a new Argento flick, Jones goes on and on about how great such a such film is going to be. He recovers in the review section most of the time and there are a couple of anecdotes that make Argento look like a dick. In order to maintain his auteur status, Argento occasionally steals ideas and takes credit for other people's work. Eh, nobody's perfect. Fulci could be a tyrant on the set. Who cares? I'm not an actor.

The two reviews in Profondo Argento that just confuse me are The Stendhal Syndrome and The Phantom of the Opera. Now this comes down to personal taste so you can take or leave my criticism here. Jones freakin' hates The Stendhal Syndrome, one of my all time favorite Argento films. He just craps all over it and can't find anything good in a hypnotic and strange ass film that begs for multiple viewings. Then he reviews The Phantom of the Opera and can't praise it enough. There ain't no excuse for that. Even if you consider Argento's Phantom to be a comedy, it still comes up short. I love Asia Argento and I love Julian Sands but they can't save this thing. 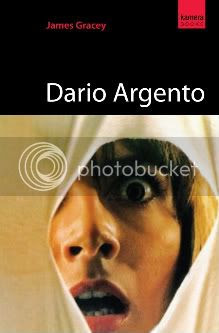 One new book on the horizon is Dario Argento by James Gracey. I will definitely be checking this one out.