Graffiti Bridge! It's just around the corner! 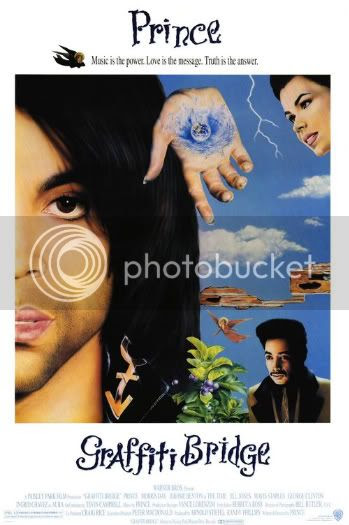 Jason. Freddy. Michael Meyers. Prince. The halls of horror just got a little more purple. What am I talking about? Ask yourself this: 'What is Richard not talking about?' Graffiti Bridge is one of the most aggressively terrible and hurtful films I've ever watched. It's an ego-maniacal fairy tale in a horrible land where funk is source of life. The fact that Prince wrote and directed this movie frightens me. The best thing you can say about this movie is that it is a collection of music videos tenuously connected together with filler material. WRONG! The parts in between the songs are some of the most bizarre, childish and quasi-religious (Funk is God(?)) load of claptrap and tepid symbolism I've ever been stupid enough to sit through. Do you remember that scene in Batman where The Joker and his cronies trash an art gallery to Prince's "Partyman"? Imagine that scene stretched for a half an hour film but with some PG-13 sex thrown in.

As you can tell, I love this friggin' movie. All I could think of was that this is Prince's Solarbabies. Okay, now I'm confusing myself. In Graffiti Bridge, Prince and Morris Day are competing for ownership of a club called Glam Slam and the affections of Aura (played by Ingrid Chavez), a poetry-writing angel. For some reason, Prince thinks the audience gives a triple fuck about this story. We don't. Why? First of all, how are we to believe that discerning nightclub patrons in Funk World (a post apocalyptic (not really) Minneapolis) would allow Prince's nightclub to falter when he's putting on a show? Morris Day and The Time marches in and steals Prince's fan base. How is this even remotely plausible? The fact that George Clinton has his own club begs the question: why the fuck isn't he the king of Funk World? Isn't that funk heresy?

There are no fat people in Funk World because Prince's drummer eats anyone who stops dancing, even if it's only for a second. And Prince may look like an alien but Morris Day looks like something that MC Hammer coughed up. How would a woman, even one of the wretched 1990s, have trouble figuring out who to sleep with? And Ingrid Chavez has a penis. There's a scene in the film where she's in the men's room in Glam Slam and she stands up to pee. Okay, that didn't happen but the sex scene she and Prince share is a clothed one. Yes, that's right. Prince humps her on his bike (or a brick wall or both) and they have their dang clothes on! I can't believe Prince couldn't go R for at least one scene in his movie.

If you are looking for your cult movie; something so unfathomably awful that you will scream at your TV and giggle until you shit your pants then check the $5 bin at your local Big Lots or Wal-Mart for Graffiti Bridge. If you hate movies like I do, then you will fucking love this. If anyone ever questioned Prince's sanity, this will be the one that puts him away. And if this is how (the artist formerly known as that symbol who is now) Prince (again) sees the world then he is clearly not a functioning member of society. Did I mention that I don't like funk? The genre, I mean. It's better than blues music, I guess. So yeah, my name is not Prince and I am not funky. 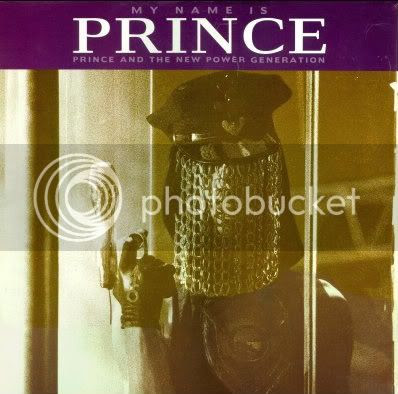