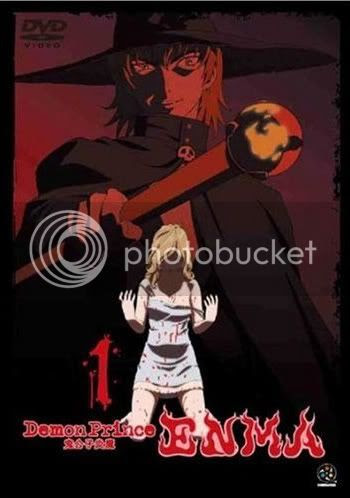 Enma (voiced by Yukitoshi Tokumoto) is a demon from Hell sent to retrieve escapees who are maligning and destroying humankind one soul at a time. Those who do not wish to follow him back to Hell are destroyed. To help him with his task (and to make sure he stays in line) is Yukihime (Saeko Chiba), a sexy snow demon, and Kapaeru (Setsuji Sato), a kappa who lives in Japan posing as a man in a costume promoting a hostess club. There's also Enma's talking hat but I won't go into that now. All you need to know is that there is some funky demonic shit going on and this ragtag group of private eyes are gonna rectify.

Demon Prince Enma (no, it's not ENEMA!) is a great though unfairly short horror anime series from director Mamoru Kanbe and writer Takao Yoshioka based on a manga/anime series from Gô Nagai. The animation is stunning though there is some computer generated business in the last two episodes. The interior of a haunted house has been created using 3D and it is a little cheesy.

Apparently, the original Demon Prince Enma is a comedy series featuring monsters and demons. This OVA (straight-to-video) drops all but a hint of the comedy in favor of amping up the mystery and horror aspects of the story. What little comedy is left has to do with Enma's lecherous personality and Kapaeru's goofy though oddly charming ways. The plots are pretty simple and you won't need to think too much when you watch Enma. My only complaint is that the third episode really drags. The characters spend too much time wandering around the CGI haunted house and it paralyzes the pacing. That being said, these four episodes are a bloody, eerie and sexy (don't forget the sexy!) way to spend a couple of hours. 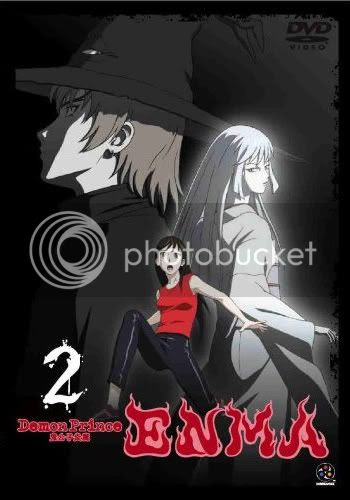 Here's a clip from the first episode (PLEASE NOTE: volume is LOUD):