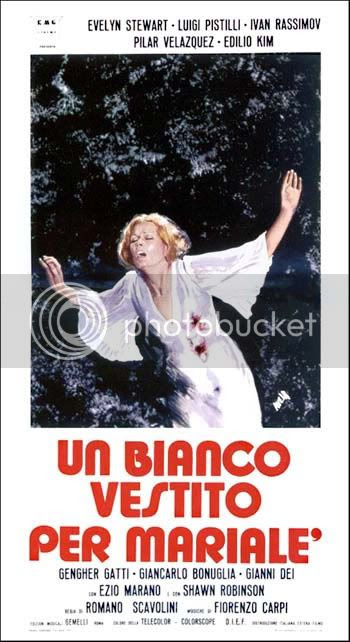 Mariale (played by Ida Galli AKA Evelyn Stewart) has recurring visions of her mother's murder at the hands of her father when she was a child. The grief and the horror of this incident has turned her into something of a shut-in. Her husband Paolo (Luigi Pistilli) keeps her in their castle away from others and keeps her doped up for her own good. When Mariale decides to throw a party with a bunch of she and Paolo's wacky friends, things quickly get out of hand. The party turns into a decadent feast. Did I mention that Massimo (Ivan Rassimov), Mariale's old flame, is one of the guests attending this little soiree? Oh shit! Tensions begin to rise and soon the party guests start dropping like dang flies at the hands of a brutal murderer.

The languidly paced yet beautiful Spirits of Death creeps across my TV screen and I can't help but love it. Stuck somewhere between giallo and gothic horror, this film is both eerily nightmarish and sleepily dull (thanks to its substandard ironic plot). Unfortunately, director and cinematographer Ramano Scavolini would go on to direct only one other horror outing: the elusive slasher Nightmares in a Damaged Brain. Because you know what? I really liked where he was going with this one. Then there's the haunting and phantasmagorical score by Fiorenzo Carpi and Bruno Nicolai which is impossible to forget once you've heard it.

I can't recommend Spirits of Death for anyone just getting into Italian horror films starting with this one but I think this is worth a look for you seasoned experts out there. There's plenty of sex and violence to make up for some of the drowsy bits. But the pacing is really out of whack with its moments of noise and freakishness followed immediately by scenes of shaky and strange calmness. This would make a fine double feature with Francesco Barilli's The Perfume of the Lady in Black.

"Mariale, what is on your mind?"

European Trash Cinema has a pretty decent copy of this rare flick. Colors are vibrant on their non-anamorphic print but it looks a little overly cropped. The mono sound is very clear and subtitles are clear. My only major complaint is that the translators were a little lazy and there are some untranslated bits. The essentials are there (not like it takes a rocket scientist to figure out what's going on) but it's a little frustrating. For a bootleg, I'd give this one a 7/10 in terms of quality.