Dinner Theater/Dawn of the Dead 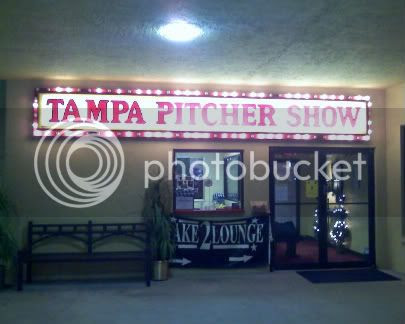 In case any of you were at last night's event and saw some creepy duder sitting there alone and looking very antisocial; that was me. Sorry if I didn't say hello. But I was a little out of my element. I don't get out much and I just had no idea what the fuck was going on. It's like my mother always says, well actually she hasn't said it to me that I can remember but she might yet one day, 'if you can't say anything nice then don't say anything at all'. Sigh...

So yeah, the original Dawn of the Dead (oh, was there a remake?), great movie. It was one of my favorites as a kid. My first encounter with the film was due to this stuttering kid at our school. (Have I told this story before?) Seemed like a nice enough chap so I would stand up for him when my loser classmates would make fun of his speech impediment. This kid was way into horror movies or so he professed and I was impressed as hell by his Dawn of the Dead t-shirt. It featured a person's exploding head. When I asked this kid about whose head was exploding, do you know what he said?

First, he told me that in Dawn of the Dead there were all these zombies. Check! He then told me that the figure on his t-shirt was the king zombie. Um... wait a second. He related to me how bullets wouldn't stop this creature and that the heroes had to use a rocket launcher to destroy it. That's how it's head exploded. Holy shit! I wish Dawn of the Dead had that in it! A couple of years later, when I finally watched Dawn of the Dead, I remembered this kid and was just felt kind of stupid. In order to make up for his stuttering, he was just a bold faced liar who had probably never even seen the dang film.

Anyway, Dawn of the Dead still haunts me. The film is urgently important in my heart. Seeing it when I was 13 and seeing it last night were the same. The setting didn't matter. I was creeped out and depressed by that film. Even when I was a kid, the film made me morose and I loved it. I had never felt that way from a movie before. It made me listless and thoroughly freaked me out the more I thought about it. The world looked bent, distorted and yet somehow even more real afterward. This is what good horror movies do. Tampa Pitcher Show, leave me alone. I don't want to talk to you right now.
Posted by Richard of DM at 8:27 PM