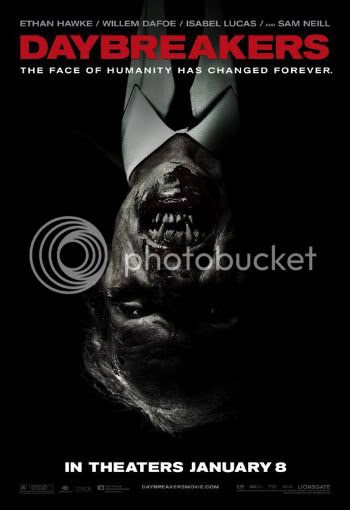 My friend Stanley texted me last week to inform me that Daybreakers kicks ass. So the wife and I took his advice and went to Regal Citrus Park 20 last night. I was kind of uneasy about this theater. It's attached to a mall so I figured there would be some obnoxiousness from my fellow patrons. I'm still so terribly attached to Muvico Starlight 20 but that is quite a drive since we moved to the other side of town. Citrus Park has a wildly ugly color scheme going on. Everything is in mauve and teal. I know this is Florida and all but what year do they think it is exactly?

There were only about a dozen people in the theater to catch Daybreakers and of course, some loser couple decided to sit near us and talk their fucking heads off during the entire film. The girl was actually heckling the movie. Now I'm not saying you can't heckle Daybreakers but her method: repeating the dialogue back at the movie in a sarcastic tone. Let me tell ya, I was pretty impressed. My wife claims that she didn't even notice this couple. She's very lucky. Okay, enough nonsense, here's my review:

God bless the Australians! The Spierig Brothers, who brought us the sweet Aussie zombie flick Undead, rock my vampire pants off with Daybreakers. (Please note: I do not own vampire pants. (Yet.)) In a future where vampires rule the world, human blood is becoming very scarce. It's up to Ethan Hawke and a band of renegade humans (who don't want to become cattle milked of their life essence) to find a cure for the vampire plague which threatens to destroy both the living and the undead.

Sam Neill (Event Horizon, In the Mouth of Madness, The Final Conflict) plays the evil head of a corporation who provides most of the world's human blood supply and as usual he is awesome. Scene stealer extraordinaire Willem Dafoe is great as a vampire hunter named Elvis who -hm, I better not say too much on that one. Ethan Hawke finally apologizes to me personally for that wretched version of Hamlet he starred in back in 2000 with his portrayal of Edward, a vampire desperately looking for an alternative for human blood to feed the starving vampire race. Claudia Karvan (Long Weekend) makes a sexy vampire hunter but I think her character could have used a little more development.

Though it bears some similarities to the New Zealand vampire flick Perfect Creature, Daybreakers is totally its own epic and eerie beast. What makes this flick special is that wacky Australian sensibility. No matter how ludicrous the plot or how campy the dialog, it's all good and totally straight-faced. The more you think about it, the more silly it all seems but damn it, I love this movie. The vampires are a mix of both the cool, emotionless yuppie variety and feral insatiable mutants. Most importantly, there's nothing half-assed about Daybreakers. The gore is bountiful, creature makeup and special effects rock, and there are even a couple of good scares.