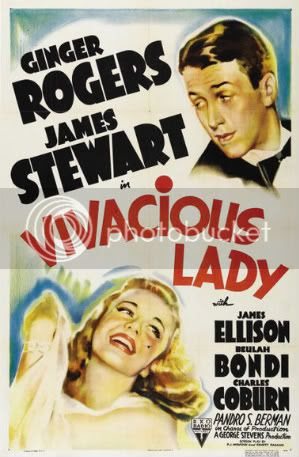 Turner Classic Movies plays some badass shit once in a while and the 1938 classic Vivacious Lady starring Ginger Rogers and Jimmy Stewart is truly badass. This film is funny, sweet, quirky and only mildly racist. Um yeah, there's a couple of black characters (played by Hattie McDaniel and Willie Best) who are not painted in the most favorable ways. Sometimes the person delivering a joke is also the butt of the joke. Not cool. Well, it was 1938 and Hollywood was full of racist dickheads, what can you do? People tell me that Swing Time is the best Fred Astaire musical. Really? There's a black-face number! Are you fucking kidding me? That's just depressing. (Besides Top Hat is better.) My mother-in-law had a good point though. It is better that these scenes exist so that no one can forget how things used to be. Very wise. Anyway, I'm getting off track here. Despite a couple of glaring 'why did they have to go there?' moments, I loved Vivacious Lady. Now let's go to hell. 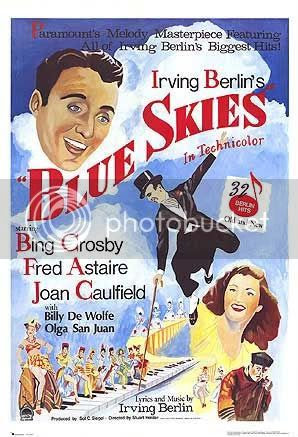 Talk about your totally mismatched double features! It is so unfair of me to have started Blue Skies right after Vivacious Lady. This film is so awful because it is almost good. If this had been hilariously bad, we might have survived. I tried to heckle this fucker but no, Blue Skies just sucks all the life right out of the room. It's movies like this that give musicals a bad name. I'm not a big Bing Crosby fan, no sir. But I do like High Time, the one where he's a big time business owner who decides to finally go to college even though he's in his 50s. Now that is an awesomely bad and just plain weird movie. Forget Back to School, you gotta dig on High Time.

So this movie has Fred Astaire and Bing Crosby competing for the love of Joan Caulfield. Wait, who in the hell is Joan Caulfield? Look, I am not an expert on old movies. In fact, I only just started really mining TCM for their good stuff but after watching Blue Skies, I still don't know who this woman is. The minute it became clear to me that this dullard was going to be the love interest that Astaire and Crosby throw their lives away over, I almost turned the movie off. ALMOST! I really should have gone with my instinct on that one. I'm dumb! So we have this bland woman inspiring all this passion and despair in these two guys who are so out of her league it's just bizarre. However, Bing Crosby is ugly. He's got those tiny little freakish doll-sized ears on an oddly shaped head. And he's got that boxy physique! Duder has no waist! His legs start at his armpits. The fuck is up with that? Maybe Joan Caulfield isn't such a bad catch for him after all.

Blue Skies has one of the worst numbers I've ever seen. Astaire and Crosby go through their old vaudeville routines for some reason and it sucks and it goes on forever and maybe it was supposed to suck and holy shit I don't know! <--- Run on sentence! Hey look, here it is:

Really there are only three reasons to torture yourself with Blue Skies. Don't do it but if you're going to anyway... First up is Billy De Wolfe, he plays Crosby's right hand man and is perfect comedy relief. He has this weird comedy routine in the middle of the movie where he imitates a middle-aged married lady getting plastered at a bar. Very strange. Second reason to watch this movie is the lovely Olga San Juan. She is just adorable in her musical numbers and should have been the love interest for the two big stars. Her character does end up with De Wolfe's in the end so there's a spoiler for you. I could have watched an entire film just about those two's romance. And finally, the third reason is this: