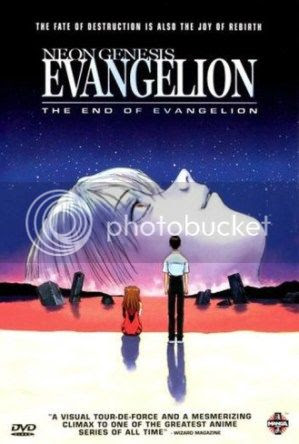 Speaking of game-changing anime titles, Evangelion rocked my world when I first saw it back in 1999. Now don't get me wrong, it wasn't totally consensual. If you have a heart, this show (and the theatrical films) will emotionally rape you. I remember watching this with my girlfriend at the time, being depressed for a week afterward, and loving every minute of it. This show made me a lifelong fan of it's production company, Gainax. Whatever they have up their sleeves, you can be sure I'll check it out.

A decade after mankind was nearly wiped out in a huge cataclysm, three teenagers, Shinji, Asuka, and Rei, are chosen to pilot the Evas, giant robots that have been built to protect the Earth from monsters (nicknamed Angels) that fall from the sky. For unknown reasons, these Angels are bent on destroying NERV, a corporation run by Shinji's father, Gendo Ikari. Battle after battle ensue as the Angels become smarter and more adept in their attacks. It is up to Captain Misato Katsuragi to train these kids to fight but at what cost? With the world on the brink at every turn, these questions remain: What are these creatures exactly and what are their intentions? Is the destruction of the human race really their only mission? What horrible secrets are lurking in the bowels of the NERV corporation's giant underground fortress?

Sounds a little generic, right? Sounds like a thousand other giant robot shows? Well, let me tell you something, this ain't your ordinary mecha-melodrama. This show takes high octane, high stakes action and blends it (to be fair, not always seamlessly) with psychoanalysis and religion. Evangelion is really, really smart. It is also populated by well written characters that you actually care about. It is also a gory spectacle with lots of disturbing imagery and more than a few jaw-dropping surprises throughout its run.

Now when I recommend this one, I am not fucking around. You need to see all 26 episodes of the original series and both theatrical films: Death & Rebirth and The End of Evangelion. If you survive that then check out the newly revamped and retold Rebuild of Evangelion films which expands the story (but I feel like they don't really stand on their own; but I might be wrong, there are still 2 more full length films that haven't come out yet). So yeah, if you haven't seen this show, check it out. If you have and didn't like it, give it another go. Evangelion is a richly rewarding experience.
Posted by Richard of DM at 7:00 AM