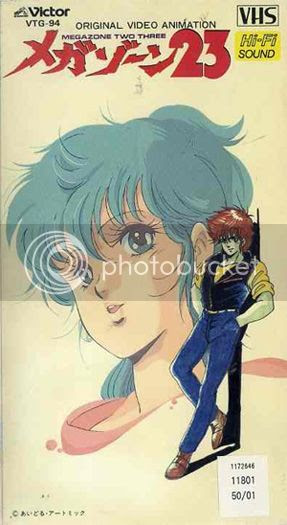 Shogo is a free-wheelin' hot rodder in early 1980s Japan. He cruises around with his buddy and chases chicks. One day, he nearly runs over a hottie named Yui Takanaka. While giving her a ride to an audition, Shogo finds out that she's a dancer looking for her big break. Sparks fly and he gets her number. But Shogo's life is about to change forever when his old pal Shinji turns up with a stolen mechanized prototype motorcycle called the Bahamut. Some evil government agents want the bike back and kill Shinji. Because he's such a skilled rider and such a radical dude, Shogo escapes on the Bahamut. 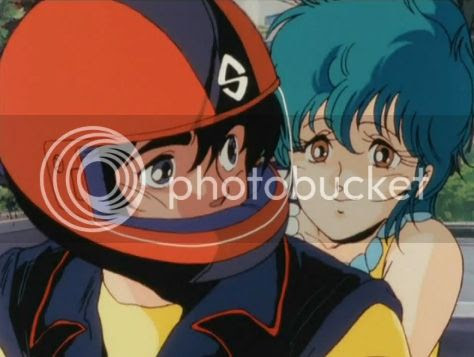 Shogo attempts to contact the MTV-like station to get the host and pop idol Eve Tokimatsuri to broadcast images of Bahamut and his story. But those tricky government agents block that shit and send even more agents after Shogo. On a crazy highway chase, the Bahamut transforms into a mecha! Whoa, I didn't see that coming! Yui and her roommates are drawn into the violence and we find out that the world that everyone knows is bullshit. SPOILER: The city is actually a spaceship floating around... in space. The military is preparing to fight aliens and for some reason, normal citizens are kept in this fantasy world of 1980s Japan. To be continued in Part II. 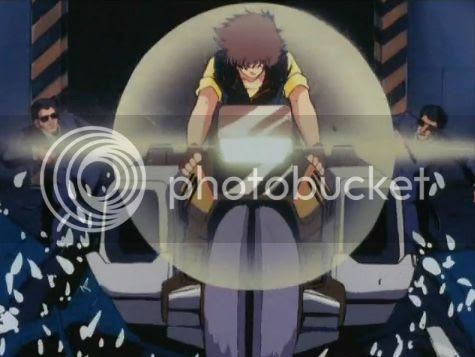 Oh Megazone 23, where have you been all my life? Director Ishigoru also directed one of my favorite animated films of all time: Macross: Do You Remember Love? so you know I am down with this shit. I love the character designs by Toshihiro Hirano. The story is pretty weak (that big revelation doesn't make a lick of sense) but this is some violent and bloody melodramatic entertainment. I am definitely looking forward (though somewhat terrified) of what Parts II and III may bring. I seriously wish I had seen this 25 years ago.
Posted by Richard of DM at 7:01 AM