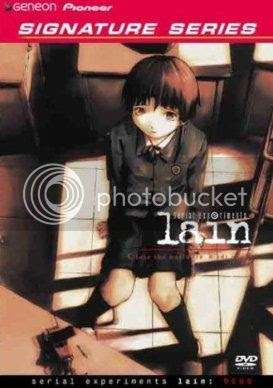 Lain Iwakura is totally not your average schoolgirl. She is a space cadet (not literally) and she knows nothing about computers. She is the charity case of some school chums; Alice, Reika, and Julie are always trying to get Lain out of her shell. Things get weird when another of her friends at school named Chisa sends Lain an email. I know what you're thinking: "Like OMG, Lain? How does she have friends? She is such a weirdo!" No, that's not the weird thing. The weird thing is that Chisa has been dead for a week (she took a header off a very tall building) and is claiming that her soul now resides on The Wired (AKA The Internet). Lain finds this intriguing and decides to look into this whole "computer thing".

Speaking of fucked up home lives, Lain's is a real doozy. Her father is a workaholic computer engineer who only pays attention to Lain when she starts showing interest in updating her Navi (AKA personal computer). Her mother is an emotional iceberg. Hell, they both might be robots. And lastly, Lain's sister Mika is a total beyatch so I guess she's the only normal one. Well, "normal" until she is replaced by a gibbering doppelganger but I'm getting ahead of myself.

Lain takes to The Wired like a middle aged pervert with a video camera at an anime convention. She immediately discovers her true self online: a totally badass hacker who doesn't take shit from anybody. The more time she spends on the computer, the stranger her world becomes. Weird "Men in Black" type duders start following her around, someone on The Wired begins impersonating Lain for nefarious purposes, she meets a presence online that claims to be God, and she even witnesses a shooting at the local nightclub, Cyberia. Get it? Cyberia!

Back in 2000, when I first saw Serial Experiments Lain, this show was quite a gamechanger. I had never seen anything this cerebral or unsettling in anime before. It takes techno-horror to a whole other level with huge doses of paranoia and depressing themes. Subjects like religion, drugs, video games, sex, aliens, the alienation of modern life, and people's fear of computers are done very well here in horrifying, surreal, and hallucinatory ways.

My only complaints about the show are that it is a little talky (more ideas than action), the technology in the plot is getting a little dated, and there were obviously some budgetary constraints since there are some reused and re-purposed shots throughout the later episodes. The English dub is kind of corny in spots but over the years, I've gotten so used to it that it doesn't bother me much. Flip it over the J-dub if it bugs ya. Either way, Serial Experiments Lain is definitely worth checking out.