Dr. Kishida has developed a mecha named Ariel in order to combat aliens that are determined to take over the Earth. Unfortunately for Kishida, only his granddaughters can pilot Ariel and all three hate him. Well actually only two. Aya is a brainy brat who just wants to finish college. Mia is a willful tomboy that refuses to be a mecha pilot. Kazumi is the youngest and least mature but she at least is willing to do whatever her grandpa asks of her. Hey, you pervert. It's not like that. Trust me, there is nothing like that going on here.

The aliens are lead by Albert Houser, a droopy-eyed sort who is kind of a loser. He has grand scale plans for planet Earth but the accounting department is the biggest threat to a successful invasion. Houser is assisted by Simone, a real wet blanket who is more concerned with the bottom line than conquering the universe. Another alien, a badass named Ragnus takes over the invasion so that some shit will finally happen in this fucking anime. But he has to contend with not only Ariel but also a traitorous alien duder named Saber Starburst (I'm not making that up) who wants to stop his alien brethren for some dang reason.

I picked up Ariel real cheap on VHS and I'm glad it was cheap. Don't get me wrong, this isn't too bad. I dig the action (especially the giant monster designs) and the characters are okay. The score is abysmally generic and lame in a bad way. I love how the threat of an audit from the alien IRS is helping keep Earth safe. So yeah, this is a decent timewaster. I haven't gotten around to Ariel Deluxe yet so I don't know if that is an improvement on not. 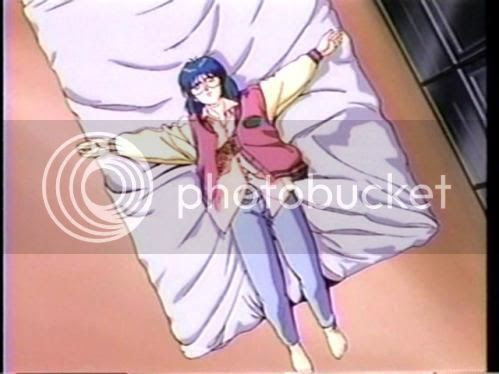 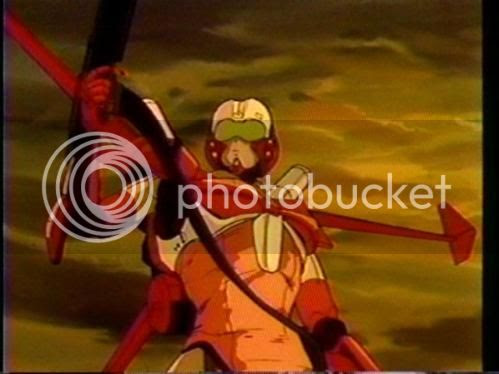 I could be an uglier designed giant robot but I just don't know how. 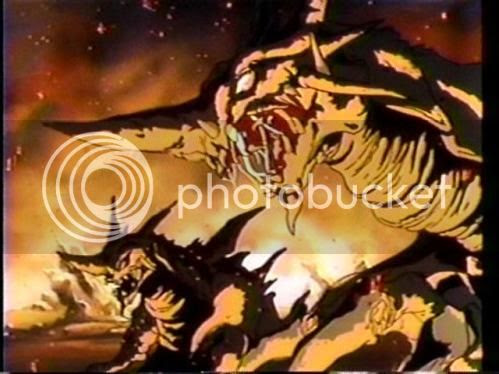 Hi, we're monsters. We both think we're wasted here.
Posted by Richard of DM at 7:00 AM