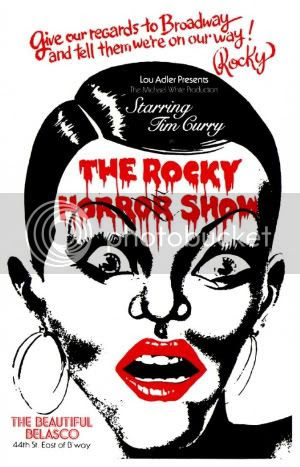 You should not under any circumstances go to an old rundown theater to watch The Rocky Horror Picture Show where the audience throws rice and toast and used condoms (regional) at the screen. Well, I guess you could. But you'd be going against the spirit of the film. If you're one of those folks who gets dressed up in lace and/or gold lame to reenact the film at a rundown theater, you too have got it all wrong. The whole point of The Rocky Horror Picture Show is that you watch it completely alone, locked in your room and then cry your eyes out when Columbia gets killed.

In 1990, there was all this hoopla about Rocky Horror's 15th anniversary and I decided to rent it. This a was very odd experience. I was 14 years old and I had absolutely no idea what this film was supposed to be about. I assumed that it was a horror movie, which it is. But it's also a gender-bending camp fantasy fetish festival of gay. This is a good thing, obviously. To say that I didn't 'get it' would be an understatement. But I did fall in love with Columbia and Magenta instantly. There was something eerily comforting whenever they were on the screen. For a teenage boy, it was impossible not to notice Susan Sarandon jiggling about but Little Nell and Patricia Quinn stole my heart. I was crushed when Riff Raff guns down Columbia at the climax of the film. Nobody can get over that.

When I was a senior in high school, I was dating this magical chick who insisted that I go with her and see Rocky at the local almost-condemned theater in Palm Beach County. How could I resist? It was a reason to stay out until 2am and a reason get in good with this girl that I was head over heels in love with (after all, we'd been dating nearly 2 weeks). We went with her obnoxious friends and I got the 'virgin' treatment from the cast when we arrived at the theater. I'm sure this varies from state to state but I seem to remember getting on stage and... I don't know. There was whip cream involved. I've blocked the rest of it out and will need a therapist to uncover that particular public humiliation.

We had a blast. Throwing rice, toast and toilet paper, screaming at Brad and Janet, and dancing in the aisles. It was the best night. Plus I got to make out with my girl in the backseat of her gay friend's hatchback all the way home. She was wearing these bright red stockings and... I don't know. I'm blocking that memory too. On purpose, so you guys don't start throwing up on your monitors. So like a week later, she and I broke up. It was my first real heartbreak and I was totally inconsolable for an entire day.

The next time I watched Rocky Horror, it was after my mom had bought me a copy for Christmas. Like most movies I owned on VHS, I proceeded to watch it over and over again. Oh, there's so much to love in every frame. The gay and cross-dressing themes don't really speak to me (I can hear you guys going 'yeah right') so much as the film's limitless love of bad sci-fi, horror, and rock and roll. I bought the CD of the soundtrack and cruised around Jupiter, Florida blasting it from my car's speakers. Later in my senior year, when I was dating someone new, we went to another midnight showing at the same crap theater with a bunch of our friends.

While I sat there, watching the film with the crowd the second time around, I realized that I should have just left this experience alone with my 'virgin' run. It wasn't fun this time. It felt like a chore to get up and dance. I could tell my gf wasn't into it either (she was a dang stick-in-the-mud so that wasn't a big surprise) and I just wished I hadn't bothered. For me, The Rocky Horror Picture Show's real power lies in one's personal devotion to it. The public spectacle is an essential experience (if only once) but the movie was specifically written to be watched alone. How do I know that? Well, I read this interview with Richard O'Brien who said that "the musical play was only ever meant to be performed before one person at a time. I've always felt that the people who perform it live in front of a large audience are tainting my original vision. Please, I implore you, if you're a real fan of Rocky Horror, watch it all by yourself."

You should really Google that interview. It's fascinating. Anyway, I guess I could launch into a diatribe about what exclusionary dicks the Rocky Horror cast and crew in your area are probably like. But I've heard they're not all like that. Florida tends to ruin everything. Meh, I'm kind of an asshole myself so I'll just shut up now.