Wednesday Ramble: My Life with Demons 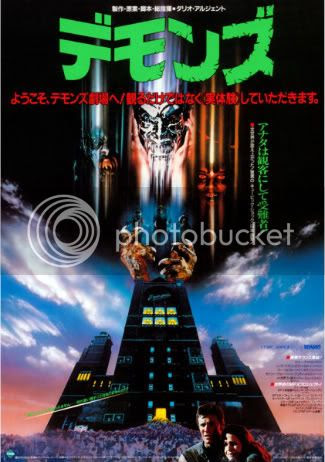 My friend Shawn was the first of my friends to come from a ‘broken home’. His parents were divorced! This alien concept was a struggle for me to accept at first but as time passed, I realized that kids from homes with divorced parents are people too. Shawn’s cool redneck dad lived next door to me so I only got to see my friend every two weeks or so. Okay, maybe ‘cool redneck’ is an oxymoron. He had a really racist dog named Shiloh. So anyway, one weekend when I was ten years old, I managed to convince Shawn that I had to spend the night at his mom’s house. She had remarried several years before and for some reason, I imagined that Shawn’s life at her place was some kind of Shangri-La.

I was right. I swear to you, this kid had every friggin’ G.I. Joe figure and vehicle ever released and we spent so much time choosing our forces and setting up the battle, that we never actually had the battle. The next day, with only two short hours left before I had to leave Heaven, his mom reminded Shawn and I that we hadn’t watched all the movies we’d rented. There were two left: an action movie I can’t remember and Lamberto Bava’s Demons.

The horror bug had already crawled into my brain and was laying eggs (which are still hatching to this day) so my vote was for Demons. For some reason, the hideous creature on the box art was strangely hypnotic and I couldn’t stop staring at it, even as the movie played out. Obviously, I had no idea who producer Dario Argento was or who director Lamberto Bava was. I had no idea that Italians made horror movies. That revelation was a long time comin’. 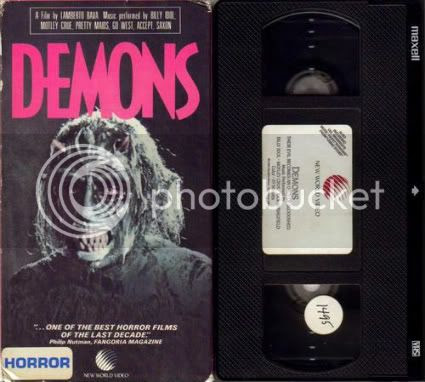 [Some minor spoilers coming up. Shouldn’t affect your enjoyment of the film.]

There has rarely ever been a more perfect entertainment. My ten year old brain devoured Demons. The film is about a movie theater full of patrons who get possessed by murderous and slime-spewing creatures from hell. Luckily, there are samurai swords and motorcycles lying around to enable all kinds of nonsensical mayhem and gore-soaked action setpieces. The only scenes that truly frightened me were when the survivors finally get outside the theater to find that the city is overrun with possessed people. I have this thing about society breaking down. Very scary.

So the hero guy and the survivor girl hitch a ride with some heavily armed parents and their kid in a jeep who are trying to flee the city. As they’re cruising along and we expect the ending credits to roll, the girl suddenly starts growling and we see that she was scratched by a demon at some point. While she’s turning into a demon beast, the kid nonchalantly turns around in his seat and shoots her with his shotgun. Point fucking blank. She goes flying and my jaw hit the floor. After all the gore and pretty much relentless insanity of Demons, the last thing I expected was this kid to be a bad ass.

Shawn and his mom were nonplussed by this monumental event. Shawn thought that the kid was dumb for taking so long to react. You see, I always identified with kids in movies so to see one actually kill someone (even someone possessed by a demon) was very shocking (and empowering) to me at the time. I would be similarly bowled over by Hob, the kid drug kingpin in Robocop 2. Demons would pop up again a year later when my sister and her husband were looking after me. This time, something truly scary happened: I accidentally kicked over my brother-in-law’s spit can. I know that the cigars I smoke are disgusting and all but my God, the toxic waste that came slowly oozing out of that Coke can was truly odious. 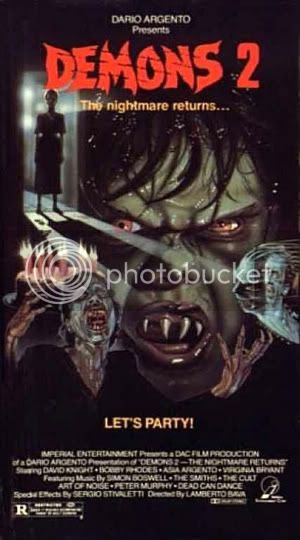 When the sequel to Demons hit the video store, I was more than a little ecstatic. Some people have claimed disappointment with Demons 2 but I have to say, I was completely satisfied the first time around. In this film, the demons go after the residents of an apartment complex. It may not be the most memorable or inventive film but for my preteen brain, it was magic. The scene where the demon comes out of the television… Genius! And of course, the fight scene in the weight room where a bunch of roid-raging lunkheads are no match for the demons is freakin’ awesome.

I guess the most frustrating thing about Demons and Demons 2 is that I had to grow up (don't believe it). Back in 2003, when I revisited these flicks from my childhood, they just didn't measure up. Call me crazy but the first film drags. I wasn't friggin' BORED with Demons when I was 10! What fucking horrible trauma happened to me between 1986 and 2003 that made me into such a lame-o? Oh yeah, that's right. I worked at Pier 1 Imports. It's sequel is just kind of redundant and mostly disappointing. Thankfully, I can still appreciate these films for their killer soundtracks and Italian oddness but alas, most of the magic is gone. Boo hoo.