Wednesday Ramble: Anything but The Exorcist 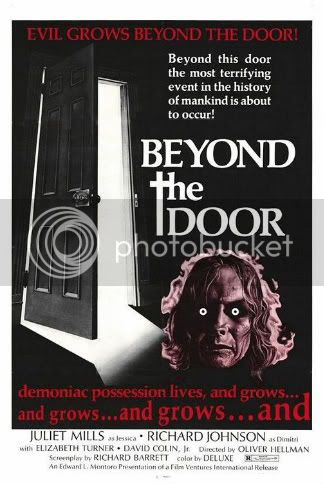 One of my earliest memories of a horror movie almost scaring me was around the time when The Exorcist was making its debut on a local TV station. I’m pretty sure I was 8 years old when one night, my dad and I were watching TV and I was dumbstruck by an ad showing a couple of highlights from this classic and very terrifying film. My mind came unglued. The sight of Linda Blair as Regan staring off into space with goo dripping from her face freaked me the fuck out. About 5 minutes later, my dad reminded me it was time for bed. I begged and pleaded not to have to sleep in my room upstairs. The house seemed so creepy all of a sudden that I couldn’t even think about ascending the stairs. He agreed to let me sleep in my sister’s room next to the den. She was staying at a friend’s house so I retreated there and left the door open.

My logic was unfortunately flawed. You see, I could still hear the TV from my sister’s room and my dad was still watching TV on the same channel that was playing the ad. So every 10 minutes or so, I could hear the demon’s threatening voice, the shouting of the priests, and the screaming of Regan’s poor mother. Worse still, my sister had these cheap closet doors that wouldn’t close completely. I had to keep getting up to try and close them. Every time it seemed they would stay closed, they would come unlatched and slowly open again. I just knew there was an evil girl in there about to jump out and kill me at any moment. I called my dad into the room about 10 times and he finally had to yell at me to get me to chill the hell out.

This isn’t the commercial that scared me but it’s got a few snippets of what got to me:

It wasn’t until many years later that I got up the nerve to rent The Exorcist and finally watch it. I think I was 13 or so when I finally confronted one of the most horrifying films ever made. We picked up the VHS at the video store and I watched it alone in my room. This experience was anything but disappointing. I was mortified, exhilarated, and shaken to the core. My only option was to check out the sequel. Woops, that didn't work. To this day, I still haven’t managed to sit through Exorcist II: The Heretic. I have read a few reviews that have highlighted the film’s good points but seriously, I find it interminably boring. I promise to give it another chance sometime (especially since Ennio Morricone did the score).

Now Exorcist III is where it’s at, y’all. I didn’t see this film until it had been around for quite a while. One of the last ma and pa video stores in Jupiter, Florida was going out of business and I managed to score this and Blue Velvet on VHS for $1 apiece. It was during this time period in my life when I would watch whatever few films I owned over and over again. My love for Blue Velvet eventually waned (stupid mechanical bird) but I still love Exorcist III. William Peter Blatty brought the pain by pretending that Exorcist II never happened and assaults the viewer with all kinds of crazy craziness. The film gets under your skin with some truly scary scenes and a severely angry George C. Scott yelling at people (and demons). Plus, Brad Dourif delivers one of the finest monologues of his career.

In 1998, The Exorcist came stumbling drunkenly back into my life and featured even more abominations. My girlfriend at the time and my best friend Scott were psyched beyond belief to catch the movie re-released in theaters. This was a very bittersweet experience. The film looked great but some new cheesy sound effects and digital touchups and outright lameness. When it came out on DVD dubbed as the ‘Version You’ve Never Seen’, I was pretty pissed off. Several of the film’s scariest bits are telegraphed to the audience via digital images hidden behind doors and slapped onto tense scenes that don’t fucking need any help being creepy. One thing I did learn about the original Exorcist is that the more I watch it, the more it scares me. Knowing what is coming next only makes the wait more unbearable. If anyone can tell me which Exorcist DVD does NOT have any of the digitally enhanced bullshit, please let me know and I'll buy it.

Somebody gave me a copy of Exorcist: The Beginning but I haven’t watched it yet. For some reason, I’m not in a hurry. Oh yeah, I know why: I’M TOO FREAKIN’ BUSY WATCHING ALL THE RIP-OFFS! I doubt I will ever be able to articulate what it is about all of the films that rip off the 1973 classic but for some reason, they fascinate me. First, it started with The Antichrist. This is one seriously demented film when a grown woman gets possessed by a demon and all kinds of Satanic hilarity ensues. Next came what is probably the best of the Exorcist clones, Beyond the Door, which has some very chilling and mind-bending moments of insanity. I also enjoyed the Spanish flavored Exorcism starring the great Paul Naschy.


The list of ‘good’ rip-offs is pretty short but the list of ‘bad’ yet entertaining is quite long. Here in the states, there is the blaxploitation take on the phenomena with Abby and the shaky Piper Laurie vehicle Ruby. Spanish horror genius Amando de Ossorio directed his own half-hearted attempt to cash in on the phenomenon with Demon Witch Child and some damn fool named Mario Gariazzo directed a dull monstrosity entitled The Eerie Midnight Horror Show (a title cooked up to get some of that Rocky Horror cash) starring the one and only Ivan Rassimov as the devil himself. This movie sucks but oh man, it is friggin’ outrageous. Uh oh, I’m starting to forget some of these. There’s one called Satan’s Wife that just came out on DVD this year and Werewolf Woman has some possession scenes in it that couldn’t have just happened on their own. You know?

I guess when it comes down to it, the original Exorcist is a lot of work for the viewer and is anything but a popcorn movie. It is a grueling film experience, a beautiful and painful endurance challenge that requires patience and a strong constitution. Plus it’s over 2 hours long! When I need my demonic possession fast and cheap (and trust me, I always do), I turn to the Italians (or the Spaniards). These films are a delicate balance between the genuinely scary and the delightfully tacky. I still have a special place in my heart for the original but nobody ever had a crisis of faith while watching The Eerie Midnight Horror Show! Well, I mean, I hope no one did because that would be some sad shit right there.

Oh yeah, I almost forgot The Night Child.
Posted by Richard of DM at 7:23 AM