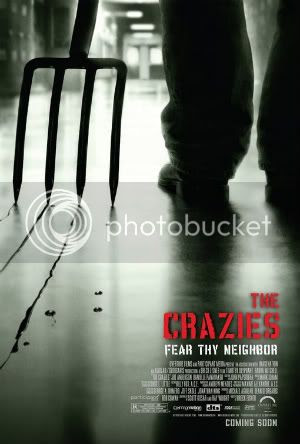 I finally got out to the theaters yesterday with my friends Nafa and Max to catch my first horror remake of the year (sorry Wolfman, I wasn't in the mood). The Crazies is about the destruction of a small town called Ogden Marsh. This normally peaceful community is suddenly plagued with violence as its residents begin going mad. The local sheriff (played by Timothy Olyphant) discovers that a military plane carrying an experimental biological weapon has crashed in a river that supplies the town with its drinking water and its only a matter of time before everyone is infected. The military rushes in to contain the virus but their orders are not to save the day. Instead, the situation in Ogden Marsh deteriorates completely while the sheriff and his pregnant wife (Radha Mitchell) and deputy (Joe Anderson) struggle to get out alive.

I'm not a purist when it comes to horror movies so if a remake is good, then I'm game. Even if the original is stellar and it's impossible to be improved upon, I still keep an open mind. George Romero's original film has never been a favorite of mine so I was pretty psyched about seeing the 2010 version after catching the cool trailers. Luckily, a cheesy line from the second trailer was not in the theatrical version. The two little girls who tell the sheriff they hear screaming coming from the funeral home didn't show up and I was glad they didn't.

The film sports some excellent camerawork from Maxime Alexandre, the cinematographer on High Tension, P2, and The Hills Have Eyes remake. Break Eisner does an awesome job in the director's seat on The Crazies. The film is frightening and very well-paced with likable and interesting characters. Casting is also a big part of what makes The Crazies so good. All of the main characters are portrayed very well and even the supporting cast is on the ball. I really like Timothy Olyphant. He reminds me of Micheal Biehn (of Terminator, Aliens, The Fan, etc.) and that is a very good thing. Radha Mitchell of Silent Hill is great as well. While I feel just a little guilty about feeding the remake machine, I'm very glad I caught The Crazies on the big screen.

For those of you who have already seen the remake (or have no plans to ever watch it), there were several key scenes that just blew me away. For starters, the discovery of the crashed plane in the river is chilling. When the sheriff realizes the plane is just underneath their boat and the next shot shows the view from overhead, I got goosebumps. The scene in the funeral home is truly harrowing as our hero discovers the town priest on a gurney with his mouth and eyes sewn shut. When he cuts the stitches on the poor bastard's mouth and the guy mumbles 'behind you', it was cheesy but in a good way. And of course the near-emasculation with the friggin' bone saw is just genius. Danielle Panabaker's death by hanging at the car wash also provided the chills. And moments later, the military helicopter blowing up the heroes' car had Nafa and I cracking up at the sheer dark comedy of the whole situation which was immediately echoed by Joe Anderson's own wry laughter.