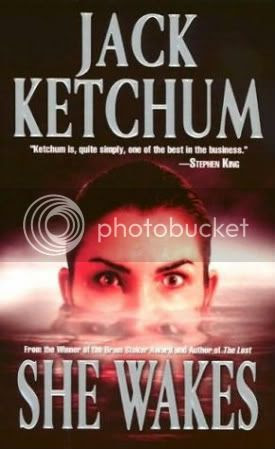 Uh yeah, She Wakes is not an easy read. It is especially difficult after you've read several other Jack Ketchum books beforehand. I was really interested to read his first supernatural tale and I was not disappointed. However, the book is quite divergent from his other work. The pacing is very off and there are a couple of ponderous moments that made me just want to give up. But I slogged through it and I'm glad I did. She Wakes is quite cinematic and feels like a big early 80s supernatural freakout with a star-studded cast. I had a great time casting who would play what character.

So what is this book about? There are a bunch of characters and a bunch of crazy shit happens. And it all takes place in Greece. How's that? Okay okay, there's also lots of sex, gore, zombies, Greek gods, and earthquakes. It is worth the read but if you're expecting another razor sharp and insanely cold Ketchum book about man's inhumanity to man, you're gonna get burned. I had to be very, very patient with She Wakes before the book revealed the good stuff (over halfway through). In the afterword, Ketchum admits he was going for something different here. He humbly admits that he was trying and failing to write a Stephen King-ish book. Don't rush to run out and read this one but don't pass it up if it falls into your lap either.
Posted by Richard of DM at 7:38 AM