Federico Fellini has always been a tough sell for me. I always struggle to get through his films. They’re beautiful, hilarious, haunting, and always about a half an hour too long. His version of Satyricon was the impetus for me to throw in the towel on art films altogether and get back, way back into horror movies. I’ve tried Roma, Amacord, La Dolce Vita, and even 8½ but I find the guy’s stuff impenetrably boring and repetitive.

My favorite aspect of his films are when characters in the periphery stare right into the camera and prattle off some nonsense at the audience. There’s a lot of that in Satyricon and it is most unsettling. Hell, the whole thing is unsettling. There is tons of bloodshed, wild decadence, and enough kink to make you very, very uncomfortable. And just like the rest of his films I've seen, it's too friggin' long!

The one film that was a pleasant surprise when I first caught it on Turner Classic Movies is Juliet of the Spirits, Fellini’s first color film. While I was recuperating from my illness this past weekend, I noticed that TCM still had the film stashed away in its free ‘On Demand’ thingie. This film is full of ghosts and while I watched it on Saturday, I myself was haunting our living room. I felt like a husk of my former self and needed something to heal with. So, much to the confusion of my mother-in-law (who sat down long enough to catch about three-fourths of the film) and to the weariness of my wife (who was also sick and who just caught the last half hour), Fellini’s phantasmagoric psychoanalytic pop masterpiece invaded our brains and took no prisoners. 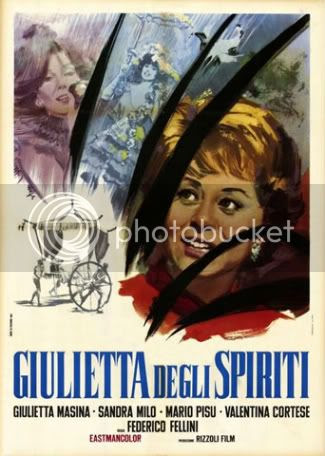 Visions of ghosts haunt every corner of this film to the point where it becomes impossible to tell what is real and what isn't. Time itself is happily disorienting. It falls apart along with all the absurd and hilarious chaos while Fellini, drunk on color, holds it all together. Juliet of the Spirits is about a housewife (played by Giulietta Masina) who suspects her husband is cheating on her. She is visited by a number of spirits who guide her through this rough time (but in the end, she must choose her own course with or without the man in her life).

Yes, this movie is too long. In an instant, Fellini can communicate a memory or show what Juliet is thinking but that's not what he's going for here. He has to hammer his idea home through repetition. But his is an off kilter machine that reveals more with each turn. A Fellini movie is like a 2 and a half hour John Coltrane solo. The theme of the film is hidden within the notes and the distracting bleats of the horn. All that you need to know is revealed instantly yet the song becomes more and more dynamic with each measure. Little by little, it all comes together and your head feels like its going to explode. But by the end of the film, you see Juliet's heart shining brilliantly and guiding you to safety with its perfect melody.

Whoa, did I just write that? I should probably stay away from artsy films. Anyway, I can't believe I found a Fellini movie I actually like! I haven't seen everything, obviously, but I take this as a good sign. There's still a lot of his works to go through but this portrait of Juliet is all aces. This petite woman with the thin smile is overlooked, left behind, and not good enough for her shitheel husband and the stuck up women in her family. But the spirits choose her to speak to. The oracle chooses to speak to Juliet instead of her wacky friend Valentina (played by Valentina Cortese (my favorite actress in this film (next to Masina, of course))). Everyone in the spirit world (even those with malicious or selfish intent) knows that Juliet is special. Every dream, disembodied voice, memory, and ghost is there to guide this woman who is so full of love she is about to burst.

I hope I don't seem as though I'm even pretending that I have a clue as to how to write about a film like this. Juliet of the Spirits is just a magical film that is just so overwhelmingly beautiful and fun (okay, it's a lot of work) to experience that I just had to babble on about it. I've watched it twice now and I can't wait to watch it again. For any Fellini film to get to me like this one has is pretty special. There are so many more things to talk about. I didn't even go into the spirits (some of which are just creepy as hell) or Sandra Milo's frozen smile or the private eye (who dresses like a priest). This is just the tip of the iceberg, people.