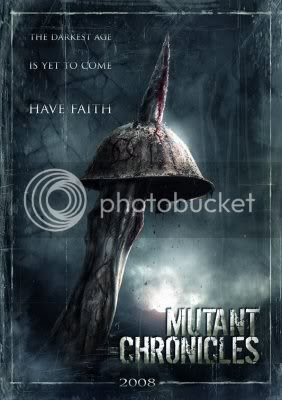 During a great war between the four corporations that rule the Earth, an ancient alien machine that transforms human beings into murderous mutants is awakened. For thousands of years, a group of monks has been guarding a weapon which will stop the machine. A monk named Brother Samuel (Ron Perlman) chooses a group of soldiers from opposing sides to go into the heart of the enemy's lair and end the destruction of mankind.

I wasn't planning on talking about Mutant Chronicles when I sat down to watch it last night but it was just too dang weird not to. Based on the role playing game of the same name (which I didn't even know existed until just now (I told you I was out of touch)), the film has the script of a Syfy (yes, that's how they spell it now) Channel movie and the look of a video game. What Mutant Chronicles also has is an infectious energy that is impossible to deny and an excellent cast.

Where did this movie come from and where did it go? This mad blend of action, science fiction and horror went straight to video here in the States but had a wider release in Russia and the Philippines (according to IMDB). This is very surprising considering the talent involved and how great it all is. Mutant Chronicles is kind of like Sky Captain and the World of Tomorrow except it's good or like The Keep except it actually delivers.

Now don't get me wrong, this is pretty much the cheesiest thing I've seen in a while but there is nonstop action and gore on display and the scenery is fantastic (if you can get past the inconsistent CGI). And the weapon designs! And the steampunk machines! Ah!!!! The essential thing here is that my kid-brain loves this one. Mutant Chronicles would have been my #1 movie in 1987. This will be some kid's Robocop. Okay, maybe not Robocop. Time Bandits! That's it. Mutant Chronicles is like Time Bandits except with more bodily dismemberment and no dwarves. And no John Cleese.

Steiner: "Any last words?"
Hunter: "Shut the fuck up."

*The version I got from Netflix was around 93 minutes long and I have no idea what the differences are between it and the director's cut.