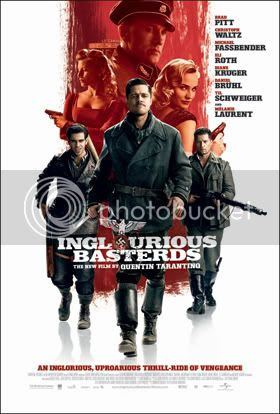 We had a good though small crowd over at Muvico Starlight 20. My wife LeEtta and I were able to drag ourselves out of bed for the 10:05am show on Saturday (sorry Nafa, we just couldn't wait!). Ah yes, this truly is the best way to see R-rated movies since most of the people who would want to watch senseless violence probably don't wake up until noon. But the crowd was enthusiastic and I think a good time was had by all (no one stormed out during the first scalpings anyway).

Anyway, the film is about an anti-Nazi guerrilla strike force led by Lieutenant Aldo Raine (Brad Pitt) with orders to go deep into Nazi occupied France and kill as many Nazis as possible. A young woman named Shosanna (Mélanie Laurent) whose family was slaughtered by the 'Jew Hunter', Colonel Hans Landa (Christoph Waltz), is in hiding as the owner of a cinema in Paris. Their paths cross when a Nazi film festival is planned to take place in Shosanna's cinema and nearly every high-ranking Nazi officer will be in attendance.

Shosanna plans to burn the place down with the highly flammable films in the cinema's library while everyone is locked inside and Lieutenant Aldo and his very angry (mostly) Jewish American squad intends to blow it up. These two groups, who have no knowledge of each other, set about on two suicide missions with the same goal: Nazi obliteration. The stakes are raised drastically when Adolf Hitler himself (Martin Wuttke) decides to attend the cinema on that fateful night.

I was waiting for Tarantino's apology for Death Proof (which I both loved and loathed) and Inglorious Basterds is it. This film has a whole lot of intrigue, historical inaccuracies, hilarious dialogue and brutal violence. The cast is excellent but it is Christoph Waltz who steals the show as Hans Landa, one of the greatest evil pieces of Nazi shit of all time.

I need some more time to process all of the insane goodness of this film but let me say this: I didn't realize that our generation needed our own The Dirty Dozen but yeah, we did. Quentin Tarantino has reminded America of one of its favorite pastimes: killin' Nazis (and their wives)! While my German-American heritage was deeply offended by all the damage done to my people, LeEtta explained to me that those weren't Germans, those weren't even human beings, they was NEH-ZEEZ! Go see this one.

Spoiler time! Don't read on if you ain't seen the movie.

The finale is pretty fucking incredible and is an orgasmic release of Jew-rage. The sight of Eli Roth and Omar Doom gunning down Nazis and their (probably innocent) wives and/or mistresses as the cinema burns around them made my hair stand on end. When Hitler gets his face chewed up into a thousand pieces by machine gun fire, the alternate history element struck me as very wonderful. Everyone wishes that Hitler hadn't had a chance to take his own life and it feels mighty good to see him destroyed and mutilated before our very eyes.

The brutal death of Shosanna is quite unfortunate and it is made even more painful thanks to the fine performance by Mélanie Laurent. However, she does go out like a hero and the image of her laughing face projected onto the smoke of the burning cinema is all kinds of eerie and beautiful. I just noticed how much time I spent on the finale. There was a great movie attached to it, by the way.

I love calling this movie "Terds"!
Posted by Richard of DM at 11:12 AM