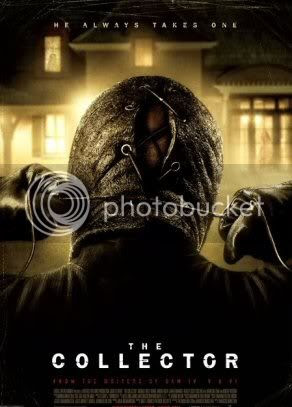 Nafa and I met up with our friend Rod at AMC Veterans 24 on Sunday to check out The Collector. This was a new theater for me. I am such a psychotic fan of Muvico Starlight 20 that I felt like I was committing an act of infidelity with a cheap whore. While it is a clean and very nice theater, Veterans does have one fatal flaw: it is too close to the airport. How the hell can I enjoy a movie when I know we're about to be hit by a dang plane every few minutes?

Here is the painfully simple plot: A thief named Arkin (played by Josh Stewart) who has been casing the house of a jeweler must steal an uncut gem in order to save his ex-wife and kid from evil loan sharks. When he arrives at the house, Arkin discovers that a serial killer (played by Juan Fernández) is already at work on the family. Trapped in the house with the sadistic son of a bitch and a bunch of crazy booby traps, the thief decides to save the remaining members of the family from the evil serial killer. But... can he save himself? Wooooooooo!!!!!

Okay, so The Collector is awesomely awful. I liked the movie while I was watching it but a few hours after we left the theater, my mind began to eviscerate the whole thing. The first half hour is really good. The setup is filmed with an excellent grainy look and a claustrophobic feel that just reeks with dread and foreboding. The soundtrack is surprisingly cool with some fantastically pretty and eerie music.

Unfortunately, the film pretty much goes to shit once the Collector duder goes to work. Now the character is cool and very creepy thanks to Juan Fernández's performance. His mask is freaky and his animal-like eyes reflecting in the darkness are quite a chilling sight. While his elaborate traps are pretty neat and occasionally add some suspense, they are wildly preposterous and get old after a while. Josh Stewart makes an excellent not-so-innocent protagonist and I wish the movie had been a better horror vehicle for him.

The director and writer both wrote a couple of Saw movies (as well as the Feast movies) and I just can't believe they aren't friggin' sick of booby traps by now. The saving grace of The Collector is that no one involved in the editing of the Saw franchise got to ruin things in post production. The film is blessed by great camerawork, perfect lighting and none of that herky jerky bullshit in-your-face editing that plagues the Saw films. So yeah, The Collector is equal parts good and bad. I have a tough time saying that it sucked but I can't really recommend it either.

The family's naughty daughter (played by Madeline Zima) gets the lamest death scene in the movie. She gets catapulted across the room and sticks to the wall on some long spikes. Every time they showed her corpse, the audience would chuckle a little bit at how ridiculous she looked. And that ending! Nothing is resolved. The writers set up a sequel that I know I'm not waiting for. Evil isn't vanquished, it is merely inconvenienced for a little while.
Posted by Richard of DM at 10:06 AM