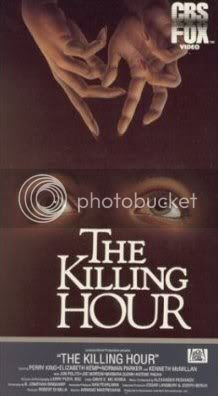 A woman's nude and handcuffed body is found floating in the Hudson. Suddenly, a rash of murders begins with the common factor of each victim being handcuffed. The cops are baffled because they're all idiots but the biggest idiot of them all is Detective Larry Weeks (played by Norman Parker). Weeks is a part time comedian and is a full time unfunny motherfucker and is a huge part of botching the investigation. He gets conned into slipping information on the case to Mac McCormack (Perry King), a sleazy TV reporter who begins challenging the killer on his show.

Meanwhile, an art student named Virna Nightbourne (Elizabeth Kemp) with big shoulder pads comes to the police with drawings that she did using her psychic powers. Her drawings depict details of the murders that only the killer would know. Detective Weeks starts hitting on Virna but not before Mac can woo her. Even with these two dudes taking turns protecting her (meaning: sexing her up), the killer still tries to take out the psychic doodler before she can identify him.

The Killing Hour is proof that some obscure films should stay that way. This trashy film has some interesting moments but thanks to some poor writing, it never really comes together. The dialogue is corny, character motivations are confusing and muddled and the love triangle between Virna and the TV reporter and the cop is cringe-inducing. On the upside, camerawork is marvelous and the score by Alexander Peskanov is gorgeous but The Killing Hour is kind of a mess. Director Armand Mastroianni made an excellent though heavily sedated slasher called He Knows You're Alone, a few clunky horror films like The Supernaturals and even some episodes of "Friday the 13th: The Series".

And just because I mentioned it: