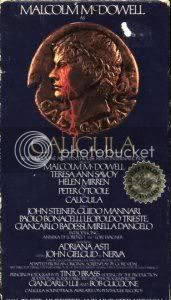 Caligula starring Malcolm McDowell, Teresa Ann Savoy, Peter O'Toole, John Gielgud, and Helen Mirren has always haunted me but I had never seen it before last night. In the 80s, the VHS was in every video store in my childhood and that image of the coin with the bleeding eyes used to always be there watching me. It was one of those brilliant VHS covers that made me have to see the film. But I never did.
You see, Caligula was one of the only films at the time to be equal parts horror, drama and porn so it always had some kind of a parental advisory sticker slapped on it. Now my parents would have let me get a horror movie with that sticker but Caligula was probably too infamous for me to try and slip that one past 'em. But you know what? I never tried so...
The story behind the film's production, its (VERY poor) critical reception and multitudinous versions is actually a fascinating one. But I'm not going to regurgitate that for you, especially not in slow motion the way Malcolm McDowell did when Caligula came down with a very bad fever which I think he caught from his horse(?). No, I'm going to try and relate a few of my thoughts from my first impression of Caligula.
You see, I got the first disc of the Image Entertainment 3 disc set from Netflix in the mail yesterday and I was thinking that everything would be all right. WRONG! The first disc is the dang porno version! Apparently, disc two has the softcore version and is supposedly a much different and better cut of the film. One day I will probably break down and rent the second disc and see if that version of Caligula fares any better than the lame XXX version.
Anyway, here are my observations:
1. Caligula is like Fellini Satyricon but with way more dicks.
2. After a while, scenes with clothed actors seem ridiculous.
3. Peter O'Toole has never been scarier (except in Man of La Mancha).
4. Holy shit, there's John Steiner! Wow, he is friggin' creepy with no dang hair.
5. Wow, Malcolm McDowell has great legs (for a dude).
6. Helen Mirren: 30 years of hotness and counting.
7. Porn ruins everything.
8. We're at the hour and a half mark and NOW CALIGULA IS GOING MAD!?!? Seriously? NOW?! So he's been totally sane up until this point? What the fuck?
9. I actually kind of really like this movie, no wait, we just got to the whore boat. Caligula is damn near impossible to love. At least that dwarf is having a good time.
10. The ending is pretty much the most brutal and awesome thing I have ever witnessed with my eyes.
Posted by Richard of DM at 8:00 AM