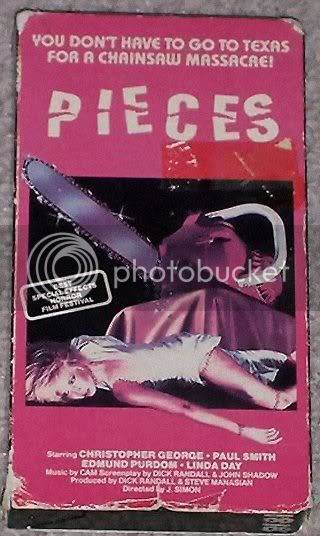 Juan Piquer Simón's Pieces has become one of my favorite pieces of trash but when I was a young lad, holy shit, I did NOT have the courage to even consider renting this badboy. And I can almost blame it entirely on the cover art. I had recently watched Flesh for Frankenstein and the whole stitches-tearing/guts spilling out thing had totally wrecked me. So based on the VHS art for Pieces, I assumed that the film was about a girl who was made up of hastily sewn together parts who walked around falling apart.

This assumption freaked me the hell out and I always passed on Pieces. My morbid imaginings didn't turn out to be true when I finally watched the film 15 or so years later. It turned out to be one of the most outrageously hilarious and ludicrously gory slasher flicks I've ever seen but the girl on the box art doesn't split her seams. SPOILER: Though she does mangle a dude's junk. That would have freaked me out even more, probably. Either way, somebody's genitals are getting ground up!

Speaking of genital grinding (not the good kind), yesterday I talked about the cover for Color Me Blood Red and how it nearly made me throw up. However, I forgot to mention why it disturbed me so much. Something told me that the man in the picture was collecting his victim's 'lady parts' and that is what made me sick. It seemed to my 11 year old brain that this was some kind of sexual mutilation and that really made me ill. Well, have a good Friday everyone! 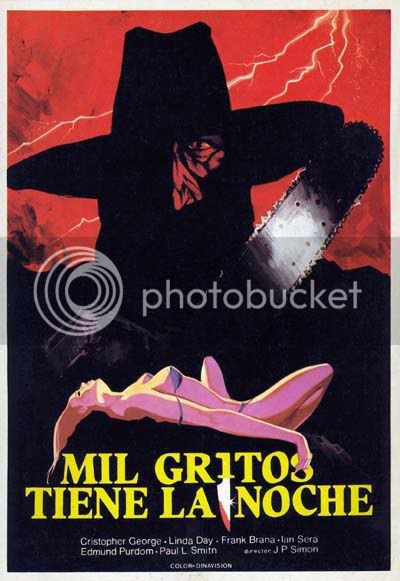