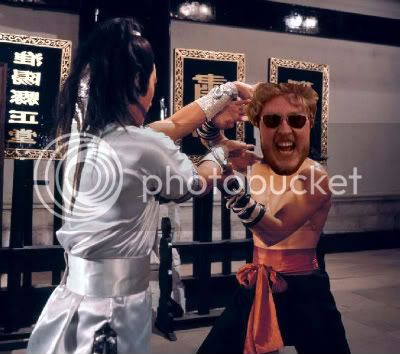 In that decade of greatness, the 1980s, some TV station (can't remember which) would sometimes dedicate most of their Saturday programming to Kung fu films. From around noon until midnight, they would play cheap junk fu like it was going out of style. I would spend the entire day in the darkness of our den absorbing these masterpieces as well as flailing around the room attempting to imitate the masters' moves. My mom offered to let me take karate lessons but I knew they would be too much work so I respectfully declined. Besides, the piano lessons were more than I could handle anyway.

One of these fabulous Kung fu Saturdays, my parents were gone all day and into the night. They came home just in time to interrupt the climax of an excellent flick where the team of good guys had finally reached the hideout of the lead villain. Suddenly, as the final battle began, the main baddie's hair turned white and then he flew at them. I had seen a lot of crazy shit that day but this fucker could fly!?!? That's when my dad picked up the remote and turned it to the news. Somehow, I repressed the rage and spent the next hour or two describing what I had seen during the day's film festival to my folks. It was all so hard to talk about since I didn't have the vocabulary at the time.

It wasn't any individual film that made the magic happen. It was the moviethon that had done it. I was in a hyper-elated state after an epiphanic Kung fu bender. Man, I wish that I could remember those flicks. Scott, a friend at work with a cult film obsession and a much better memory than mine, helped me track down one of the films that played on that fateful day. It was called Chinese Super Ninjas. In this one, the good guys travel around fighting ninjas who use the elements (earth, water, fire, etc.) as the basis for their skills.

So yeah, I still can't remember what the film was where the bad duder's hair turned white and then he proceeded to fly. The other one that day ended like this: Another team of good guys goes against a bunch of bad dudes. All but one or two of the good duders is killed. At the end, our hero (or heroes) walks over a hill to see that the enemy's reinforcements have arrived. There are like hundreds of soldiers running towards him. He just says 'fuck it' and runs screaming into them, sword drawn and ready to die. There's a freeze frame and it ends. We assume he is marching into his certain death. If any of you kickass mofos out there can remember either of these two films, please let me know. 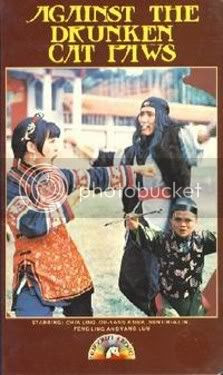 Okay, one more. Shortly after high school (1994-ish), I rented a couple of Kung fu flicks for a drunken night at home (my folks were out of town). My friends came over and we watched something wonderful called Against the Drunken Cat Paws (AKA No One Can Touch Her). My friends and I were glued to the screen for its entire running time and then we were fucking robbed! The climax was cut down so badly that we knew we'd been ripped off. What made things worse was that the second film I had selected was boring and of inferior Kung fu quality. Still don't remember what it was. Do you have any idea how much that damaged my social life? It was a disaster and I've never had any friends since then.