Akira, Domu and My Dumb Brain

I've been rereading Akira lately and thinking, "hey, they should make this into an animated series!" Now don't get me wrong, I freakin' love the film version of Akira; it was the gateway drug into a world of nerdery that I have never looked back from. One thing that you may find amusing (or just pathetic) is that when I read Katsuhiro Otomo's manga, I was kind of disappointed. I was like 'wow this is really long and who are all these characters I don't care about?' Can you believe that shit? Don't worry, the me that had lame thoughts like that is dead, I promise.

Anyway, now that I have finally pried my head out of my dang butt, I think that with a 12 or 13 episode run (at an hour apiece), there would be plenty of room to stay true to the original manga. And with CGI going the direction that it's going in, I'm sure Akira could be done live action. As long as the good old US of A doesn't have anything to do with it, it might have some promise. 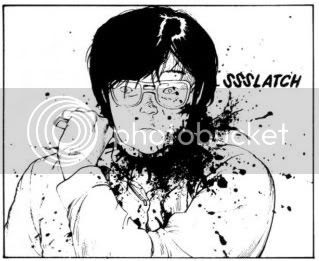 One of Otomo's other masterpieces that I would like to see on the big or the small screen is Domu: A Child's Dream. This is one freaky and genuinely chilling book that has the makings for an incredible animated adaptation. Come to think of it, Domu is a much smaller scale deal than Akira so it could work as live action as well.

Now here's something weird I did not know existed: World Apartment Horror, a horror/comedy directed by Otomo (one of his very few forays into live action). It definitely looks like it is more comedy and political statement about race relations in Japan than horror. But I'm still quite curious. Here's the trailer: