You can either be a horror fan or a sports fan. You can't be both. It is impossible. Okay, maybe you can but I can't. I blame my father. No, seriously. My dad's motto was 'put the game on'. It didn't matter what my mom and I were watching, when it came time for the game, we had to give up the TV. My dad would watch football, baseball and basketball primarily with bowling, tennis and golf as backups. His other motto was 'I gotta check the scores' which was actually 'put the game on' but under the pretense of quickly seeing how 50 other games were going. This was impossible. We would sit and wait for him to get these little tidbits of information and then the next thing you knew we were watching the fucking game.

So I have to be careful when I have kids. (God help us all.) If I dominate their entertainment, they'll turn on me and hate horror movies. Or worse, they'll just hate movies altogether. That is a frightening concept. (Me having kids!) My dad and I had a few similar interests. We both had a passion for comedy shows like "Saturday Night Live" (the Dana Carvey era), "SCTV", "The Monkees", "Monty Python's Flying Circus" and old reruns of "Laugh-In" and "The Carol Burnett Show". There were also the war movies such as The Longest Day, Midway, Tora! Tora! Tora! and our favorite: The Dirty Dozen. These flicks would usually drive my mom from the room but it was just so hard to find movies that he and I could agree on. Hope she didn't mind too much. I have no idea if my father even liked horror flicks. But yeah, it always came back to god damn sports. If he was trying to get me to get interested in them through saturation, he failed miserably. Or maybe he just didn't give a flying fuck what I wanted to watch.

The funny thing about sports (football especially) is that you can totally nerd out on them. Obsessively following what players are being traded to what team, coaches' strategies, weather conditions, injury reports, and even the personal lives of the players is just as geeky as any horror fan's useless trivia mastery. I love my friends who play fantasy football. That shit is like football fan fiction or something (but with less sex, I guess).

I see this kind of passion for detail when I go to the cigar bar. I sit there rereading Spaghetti Nightmares or checking out the new Videoscope while a bunch of dudes (some of them my age) are debating the relevance of Derek Jeter or Brett Favre or some fucking shit that makes me sleepy just trying to recall and I just get jealous. That's the one thing I long for from sports talk. That camaraderie among dudes who are total strangers. They always have something to go on about. It's an easy subject that even if you totally disagree, you can still have a blast arguing about. You can always debate who would win in a fight between Freddy and Michael Meyers. Oh wait, was I talking about sports or horror?

So yeah, my dad was a great guy but he and I were from different worlds when it came to our entertainment obsessions. The method was the same. We both put blinders on and focus on our genre. He had sports. I have horror. I wish he were alive today so that I could try and find some horror movies he liked. (Obviously, we'd do other father-son bonding stuff too if he were to return from the grave (unless he came back as a flesh-eating zombie) like Boogieboarding or building model ships together.)

I'm sure that during the holidays, I would have to suffer through some football with him but I'm pretty persistent. I can wear people down on horror movies. I can change the subject without the person even knowing it. Easiest thing to do is start extracting their favorite (or sometimes least favorite) horror movie memory. Nothing pleases me more than hearing someone's tale of how such and such movie scared them as kids (bless you Kindertrauma). Next thing you know, I'm showing them Hausu or Messiah of Evil and they just don't know what hit 'em. My mom says that I remind her of my dad so much. No argument there. So what is my motto? 'Put the gore on'. 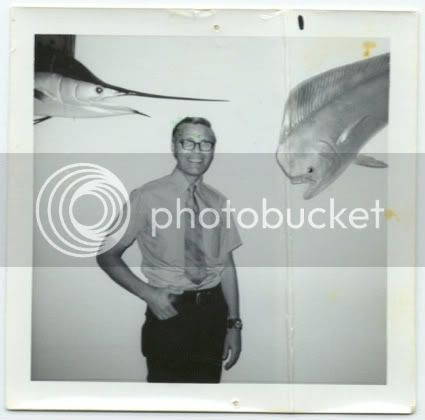