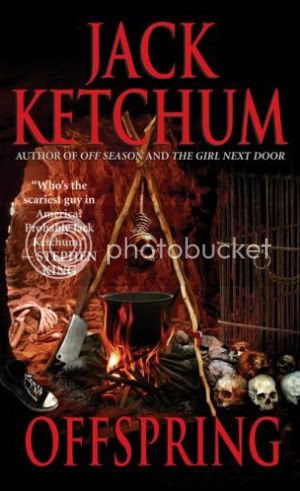 After I devoured (woops) Off Season by Jack Ketchum, I decided to go for its sequel, Offspring. In it, survivors of the cannibal tribe return 11 years after their slaughter at the hands of Sheriff George Peters and his men. With some new recruits (babies kidnapped and now grown), the tribe goes searching for some more babies to steal so that their family can grow. I made a conscious decision to set my expectations pretty low for this sequel. Not too surprisingly, Offspring turned out to be really good. Despite its sequel status, the book has some fascinating themes and delves into what is going on inside the minds of the (mostly) inbred cannibal killers. The action and pacing is perfect with some white knuckle moments that will make you want to read this in one sitting.
Posted by Richard of DM at 7:06 AM