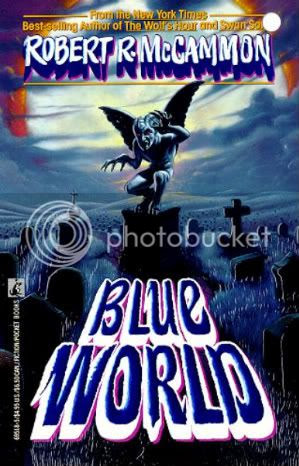 “Something Passed By”, one of my favorite short stories of all time, can be found in Robert R. McCammon’s Blue World. In the story, the world has gone through a cataclysmic change that causes water to explode like nitroglycerine, the clouds to rain blood, stones to fall from the sky, concrete to randomly change from liquid to solid, and a whole mess of other bizarre changes. The story follows Johnny and Brenda, a couple just trying to get by after their 4 year old child is killed by the ‘pharaoh effect’, a phenomenon where a room becomes a vacuum where no oxygen can exist leaving anyone trapped inside to become mummified.

I’ve always been touchy about post-apocalyptic stuff so this story creeped me the hell out when I was a teenager. Houses and people are crushed by things called ‘gravity howitzers’ and if your poker buddy suddenly bursts into flames, get the hell out of the house before it friggin' blows up. The end of the story gets even more disturbing and heart-wrenching as Johnny and Brenda find out there’s even more horrors in store for them.

My only criticism of “Something Passed By” is McCammon’s name-dropping. ‘Bradbury Park’? ‘Koontz Street’? Really? I know he was just having fun but what a dang nerd. So yeah, other than that slight misstep, this is a haunting and insanely weird short story that I would love to see made into a short animated film. McCammon is still one of my favorite horror authors.

You can read the story right here.
Posted by Richard of DM at 7:10 AM