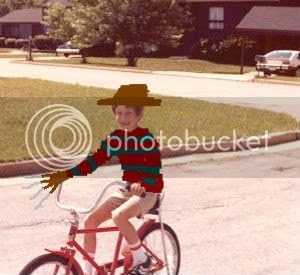 One magical Saturday night in 1985, my sister was given the arduous task of babysitting me. I was 9 years old and I was actually excited about it. As far as siblings go, we got along pretty well and with my parents out at a party or whatever, we could kick back and have fun. Unfortunately, my sister’s creepy boyfriend and his buddy were allowed to come over which made me a little jealous. Now that she was a cool teenager, I saw her less and less.

In a recent email to my sister, I inquired about this particular evening and this awful duder she was dating and she says she doesn’t remember either. He wasn’t the nerdy comic book geek she dated for a while (a guy I worshipped but who turned out to be a stalkerish creep) and it wasn’t the awesome king of sarcasm that she eventually married. No, this was some rebound jerk that she probably went out with for a month or something. Hopefully, it was less than that. With his perfect hair, sharp features and ridiculous ego, he just seemed like a total sleazebag to me. 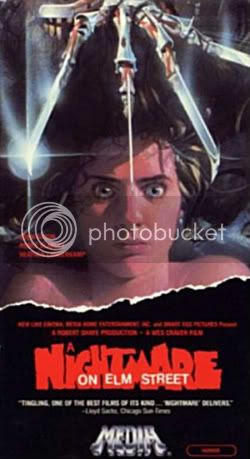 Anyway, this jerky guy and his dumbass friend were there spoiling everything but they did bring along some very important entertainment. The VHS was something called A Nightmare on Elm Street. My sister immediately said I couldn’t watch it because I was too young. This blew my mind. How could a movie be that scary, offensive, etc.? This was the same girl who woke me up in the middle of the night so we could sit up and watch the thoroughly twisted and bizarre Fantastic Planet.

Her creepy boyfriend and his bud had their hearts set on watching Nightmare on Elm Street so they started arguing on my behalf saying that I was totally old enough. Then the urban legends about the film were brought up. According to my sister, a teenage friend of hers had to sleep in her mom’s bed for 3 months after watching Wes Craven’s film. Somebody chimed in that Nightmare was so scary that it driven a bunch of kids insane because they were afraid to go to sleep after seeing it.

So before they would agree to start the tape, I had to promise my sister that I wouldn’t freak out and if I did, I wasn’t allowed to tell mom and dad. She would disavow any knowledge of letting me watch such a scary film. I was also instructed to bail out if I got too scared. I agreed to everything and begrudgingly accepted the challenge to watch this film. At this point, my imagination was running wild. What the hell kind of a horror movie is so scary to force teenagers to lose their minds?

When my parents came home later that night, I spilled the beans about being allowed to watch a horror film of such an intensely graphic and scary magnitude and they couldn’t have cared less. R-rated movies were not forbidden to me and hadn’t been for a long time. My folks were selective about my viewing but some real doozies slipped through once in a while. The funniest thing was trying to communicate to the people who had brought me into this world just how brave their son was and how I was exhilarated but not traumatized by the experience.

The actual experience of watching A Nightmare on Elm Street through my nine year old eyes (especially after all the hype perpetrated by my sis and her friends) was thrilling but definitely not the sanity erasing experience I was prepared for. The profoundly terrifying concept of a man who could kill you in your dreams just kind of went over my head. When I was 12 years old, I revisited the film and it scared me silly. The image of Tina’s walking corpse in a body bag leaving a trail of blood everywhere she went really got to me the second time around. For some reason, as I got older the film got scarier to me.

A Nightmare on Elm Street did eventually give me a nightmare. When I was around 14 years old, Freddy Kreuger invaded my mind. In this nightmare, I was at a long table in a mansion having dinner with a posh family. All of a sudden the forks lifted themselves off the table and chased everyone out of the room. “It’s Freddy!” someone screamed as they disappeared out the door. I was left alone with the butter knives which came to life and started following me around the room. I woke up to the sound of my own laughter. I haven’t dreamed of Freddy Krueger since.