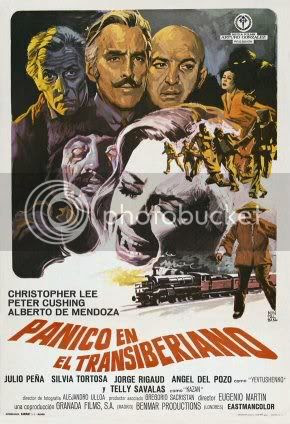 After discovering an ape-like creature frozen in the ice, Professor Alexander Saxton (played by Christopher Lee), plans on returning to England via the Trans-Siberian Railway with his find. As people start dying in a mysterious fashion (their eyes turn white and bleed and their brains lose their wrinkles), Saxton and his colleague Dr. Wells (Peter Cushing) realize that this new discovery may be a deadly creature beyond their understanding. Trapped on the train with the body-hopping, parasitic creature, things actually get worse when Captain Kazan (Telly Savalas) and his band of Cossacks board the train and he starts dishing out his own brand of mad justice. Throw in a Russian Countess (Sylvia Tortosa), a Rasputin-like monk (Ángel del Pozo), and a sexy spy (Helga Liné) and well, the shit gets real complex, yo.

The plot of this film is so confoundedly preposterous and filled with so much pseudoscientific balderdash that I can't help but love it. Eugenio Martín (The Fourth Victim) directs this Spanish and British co-production with an amazing cast. Christopher Lee and Peter Cushing are always good together and this is no exception. Plus, Telly Savalas as a loony Cossack! It doesn't get much better than that. Giallo regulars Alberto de Mendoza of The Case of the Scorpion's Tail and George Rigaud of Eyeball are on board. Don't forget the super sexy Helga Liné of Horror Rises From the Tomb. She is in this one as a spy who doesn't live very long.

I have the out of print Image DVD which is widescreen and wonderfully pretty but this film is easily available on numerous budget versions (or I'm sure you could just watch it online somewhere). The film has some genuinely creepy moments, a staggering amount of foreshadowing, and a great score by John Cacavas. So yes, Horror Express is pretty much an essential Eurohorror title. You will marvel at how Telly Savalas tries to steal the show (and succeeds, of course) and you will revel in your own insanity and/or brain melting as you try to put together all the pieces of the maddest plot ever penned (or made up on the fly). My friends and I never could figure out how the creature manages to whistle without any lips.

"There's the stink of hell on this train; even the dog knows it."