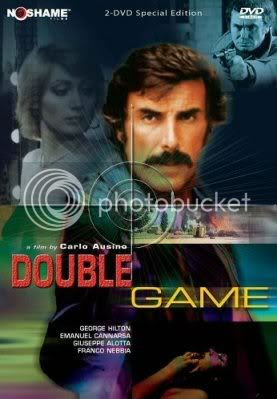 Police Inspector Ugo Moretti (played by George Hilton) and his partner Danielle (Emanuel Cannarsa) have a lot on their hands as their beloved city of Turin is overrun with crime. There is a vast network of blackmailers, pimps, and thieves running rampant and the situation is made worse by a vigilante who has decided to rid the world of these hoodlums himself. Ugo is no help catching this 'avenger' because he himself is the vigilante. He is staying one step ahead of the criminals at large and the police who haven't a clue that one of their own is taking justice into his own hands.

Working under some obvious budget constraints, Double Game does have a few weak action setpieces but nothing too embarrassing. The cinematography is nicely shot and the soundtrack by Stelvio Cipriani is excellent even with a dash of bad disco. The story has some pretty obvious ties to Death Wish but the similarities aren't so glaring as to make this a full blown rip off. The most annoying part of the film is the pathetic Kung Fu skills of Danielle who kicks some ass in one scene and then gets laid out with one punch in another.

Double Game does not represent the best that Italian crime films have to offer (far from it actually) but the story is intriguing and George Hilton is always a safe bet. The plot has the prerequisite drugs, violence, sex and shady business all over it that every fan of the genre will crave. Director Ausino went on to make a sequel (in name only) to Double Game* and Don't Look in the Attic, a horror film I have yet to read anything good about.

* The sequel, Tony: Another Double Game, which I'll be reviewing soon is an extra on NoShame's Double Game DVD.