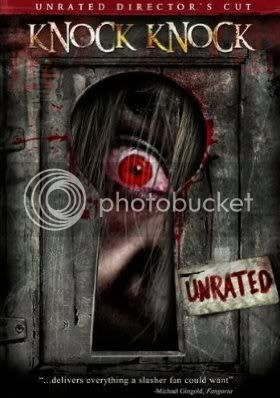 About a week ago, I opened a package from my sister Lora and inside there was a copy of Knock Knock. She said the movie was a bad b-movie and that I would love it. She was wrong but I still appreciate the gesture. In fact, I hope everyone in my family starts sending me terrible movies. This could be the start of something good.

We meet a gang of dumb teenagers that are amazingly generic but the writing saves the day by making them really irritating too. My head feels like it is getting kicked in by the jarring editing. Somebody decided to remove some frames and fade to white a whole bunch because that is what makes a movie interesting and fun to look at.

The camerawork is actually good and Knock Knock looks really nice in both daytime and night scenes. Too bad it is wasted on this junky story. I will call the killer Paper Mache Face. He looks like a Slipknot fan. So far, the film is bloody, gory and features a bit of nudity but good luck giving a shit about any of the characters or the plot. Guh, I fell asleep several times. Nice going, Lions Gate!

"Come on, Nicole! Can't grandpa do anything for you?"

Knock Knock trailer
Posted by Richard of DM at 3:20 PM