Fear (not that one, the other one) 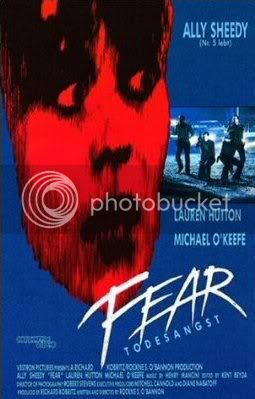 Ally Sheedy plays a psychic who tracks serial killers with her powers and things are going pretty frickin' great for her until she runs up against a killer who also happens to be a psychic. Boy oh boy, it is hard to get jazzed up about this one. Fear manages to be bad, mediocre and good; all in the space of 90 minutes. The screenplay has some interesting ideas and a couple of cool scenes (thanks to atmospheric lighting and good cinematography) but most of this film is pretty dull.

The characters are underwritten and the acting is pretty bland all around. Both Ally Sheedy and Michael O'Keefe have been better in other things and Lauren Hutton (Zorro, The Gay Blade) doesn't get much to do. Spoiler: The psycho is played by Pruitt Taylor Vince (the quivery-eyed loony from Identity) who turns in the only interesting performance in Fear.
Posted by Richard of DM at 9:05 AM