Every journey, even a purple one, has to come to an end. After subjecting ourselves to the terror of Graffiti Bridge and the accidental masterpiece that is Under the Cherry Moon, my friend Nafa and I had to complete the Prince film cycle. The thing that worried us the most was that Purple Rain would just be a good movie. How the hell are we supposed to deal with Prince just being in a good film? Before we could know the answer to that, we dug on Sign 'o' the Times. 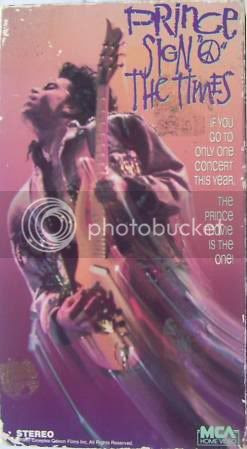 So anyway, I was fully prepared to rename this film to Sigh… No… The Times(?). But I’ll be damned if this isn’t one of the best concert films ever made. It starts off all artsy fartsy like Graffiti Bridge and then it soars into a funk explosion sensation. As I’ve stated before, I don’t like funk but I caught my foot tapping all by itself throughout nearly all of Sign ‘o’ the Times. Oh my God, that bass solo. Nafa, rewind that. Thanks to this film, I finally understand what the hell all the fuss is about.

The artsy stuff I mentioned are dramatic scenes featuring members of Prince’s band acting out some lame ass poetry/dialogue. The funniest of these is when the guy in the fuzzy hat complains about his woman to the bartender. What’s his beef? Well, his woman wants old fuzzy hat to talk to her. Oh wow, poor guy. Who talks to their women, seriously? And the weird thing is that the bartender totally understands! It’s moments like these, hidden inside this wildly entertaining concert flick, that threaten to ruin everything. But if you think about it, Prince’s overwhelming pretentiousness is part of the reason why his films are so amazing. 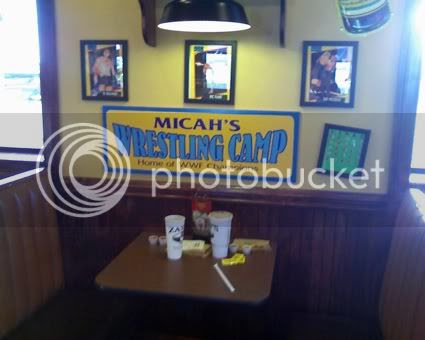 Since we watched Graffiti Bridge back in January, Nafa and I have developed a perfect method for viewing Prince’s films. I walk over to Nafa’s place from my apartment around 5:30 and go out to Zaxby’s. This is fine dining at its finest. Once we are stuffed with chicken and fries, we go to Wal-Mart. I’m not sure why but I think it’s to get cheap snacks and drink. For Purple Rain, I got some grape Faygo (though I really wanted Mountain Dew Distortion) in order to have something purple to drink. The only other soul joining us on our funk sojourn is Nafa’s cat, Buddha. 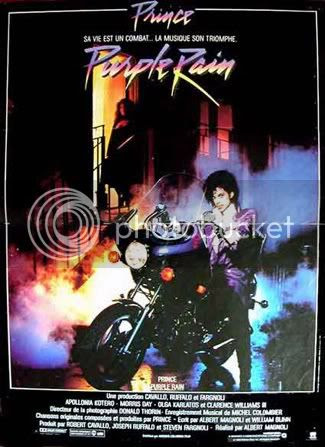 There are SPOILERS all up in this bitch, yo.

So Purple Rain begins and in the fabulous and infectiously energizing opening montage, we get to see Morris Day picking out his outfit. Immediately, I realize what was wrong about Sign ‘o’ the Times: NO MORRIS OR JEROME! Well, this movie fixes that. Thank Jesus. I still can’t wrap my mind around the fact that Prince’s world is centered in Minneapolis. Once again, the lunacy of Prince’s world is that his band is always competing against Morris Day and The Time. Yeah I know, I’ll talk more about this later. Oh yeah, Prince’s name in this movie is The Kid. Oh fuck. Not again. Hey, Jerome just threw a woman in a dumpster because she was annoying Morris.

Apollonia shows up wanting to sing in The Kid’s band. She gets introduced to the man himself and he just fucking stands there staring at the back of her head. When she finally gets the courage to speak to him, he’s gone. Unbelievable. The club owner (this morbidly obese black dude in a track suit) wants to ditch The Kid because he doesn’t draw a big enough crowd. Sigh. What the hell? So The Kid goes home and his dad is beating the crap out of him mom. His dad is played by one of the most intense black actors in film history: Clarence Williams III. Now I didn’t even spot this until IMDB pointed out this insanely obvious fact to me: The Kid’s mom is played by Olga Karlatos from Zombie. Holy crap, y’all. This is nuts. The Prince and Lucio Fulci connection is finally established. They said it could never happen.

“You have to purify yourself in the waters of Lake Minnetonka.”

This movie has a potty mouth! There can be no swearing in a Prince film. Wait, why is Apollonia riding on the back of The Kid’s motorcycle? Did I miss something? Are they dating now? The Kid convinces Apollonia to strip and jump in the lake. This caused a minor explosion of screams from me. First of all, NUDITY IN A PRINCE FILM!?!?!? Secondly, Apollonia has a superb rack. I mean, like outrageously nice. I could go on and on but I won’t. Great rack. I mean it. Even if you don’t want to see this movie, you have to check her bobbins out.

So what happened to Prince in his other films? Did he mistake aloofness for charm or something? I mean, The Kid is a total dick in Purple Rain. He smacks around Apollonia and he treats his band like shit. Especially when Wendy and Lisa want to share a song THEY WROTE. The nerve of some people! If I wrote a song and The Kid was talking to me with ventriloquism, I would be all like “Yeah, why don’t you go back to your parents’ basement, you fucking dick!?!” Yet, Prince is still charming as hell in this movie. Something that he would lose by the time he got to Graffiti Bridge. So yeah, The Kid’s home situation is pretty bad. His dad is a failed musician and he is insane. He beats his mom and then shoots himself in the head.

The Kid nearly loses his mind and even has a vision of hanging himself. Geez duder, do you have to be just like your old man? He takes the music that the girls wrote and combines it with his dad’s music to make the song “Purple Rain”. So on the night of nights at the club, he has to prove to the club owner that he has what it takes to rock the joint. Morris Day teases him about his dad shooting himself but then feels really, really bad about it. Holy shit, Morris can act! So The Kid and the band get on stage and he surprises them all by busting out “Purple Rain”. This is pretty much one of the most perfect moments in any movie ever. They play the song and practically the whole band is crying. It’s nuts. Then The Kid comes back from cooling off backstage and tears the place apart with funk. Pure brilliance.

So what’s my problem with this movie? It’s the same thing that’s wrong with Graffiti Bridge. (Okay, EVERYTHING is WRONG with Graffiti Bridge.) The fact that Prince has to compete with Morris Day for two things: 1) the headlining gig at a nightclub and 2) a woman. Give me a fucking break! How is this even remotely possible. I’m not saying Morris isn't ugly and I’m not saying that Prince isn’t short. And they’re both equally freakish in their own respective ways. But Prince is obviously a hotter duder and his music eclipses anything The Time ever did. So aside from the fact that the plot hinges on something that doesn’t make any dang sense, Purple Rain is totally great.

Okay, Nafa and I agree that it's time to watch Graffiti Bridge again. Who's with us?