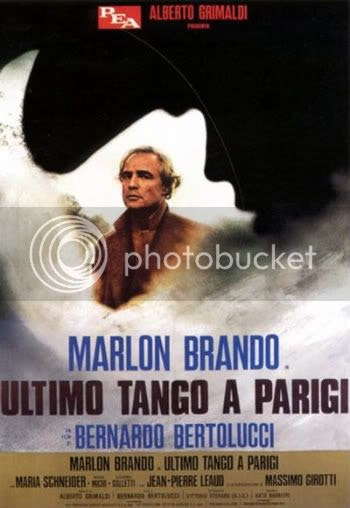 [Yeah, I’m going to spoil the hell out of this. Parental discretion is advised.]

My ramble last week about depressing movies got me thinking about Last Tango in Paris which I think I’ve watched about a dozen times. What is Last Tango in Paris exactly? Is it a darkly hilarious sex tradgedy? Is it artsy couple’s porn? Sure, why not? Sometime in the late 90s, I was a pretentious bag of tears and I was drawn like a moth to a blowtorch to Last Tango. I knew I was going to love it even before I popped the VHS into the player. And you know something? I don’t give a shit about Paris or France and I don’t even know how to tango. Maybe it was all that Henry Miller I read. I’m shrugging my shoulders. Right now. It’s like that thing people say, “I don’t know much about art but I know what I like.” Yes, people really say that and I have to agree with them; especially when it comes to this film because I don’t know what I’m talking about. I’m probably missing the point but here I go anyway.

The film is about two selfish and unlikable people: Paul (played by Marlon Brando) and Jeanne (Maria Schneider). Paul’s wife just committed suicide and Jeanne is about to get married to a pretentious filmmaker. I still don’t know who is worse off. By chance, they go to rent the same apartment and start up a love affair. This is a bad relationship from the get go. They don’t tell each other their names and they just get it on and talk all the time. Doesn’t this sound like a fascinating film? Isn’t this the most riveting plot line you’ve ever read about in a crappy blog in your life? Well, it gets better. Paul decides to take their freakish relationship to the next level. Jeanne says “Screw you, tugboat!” and blows him away. The end.

This movie tries to be shocking. It features two characters doing and/or talking about things (SEXUAL THINGS!!!!) that must have been shocking and/or groundbreaking to the arthouse audiences that this film was made to reach. I’m just guessing here but this film probably didn’t give much of a thrill to the grindhouse crowds. They might have just found it odd that Brando was wallowing in their genre. This is a trashy movie but it is also a beautiful trashy movie. I have tried to get into other films by director Bernardo Bertolucci and it just didn’t work out. The Sheltering Sky? No. No. No. No. No. I’m not going to think about that. The Dreamers? Please, I’m getting a little nauseous now. Maybe The Conformist will save me. I’ll check it out soon, I promise.

Anyway, what the fuck was Brando doing in this anyway? Duder was getting weird, that’s what. He wanted to take a chance, to be totally indulgent and Bertolucci gave him that chance. Brando isn’t acting here. He’s just being himself. Brutish, crude, sardonic, cruel, and brilliant. His obsession with death would pop up again in Apocalypse Now, another movie where he stopped acting and just started being himself on camera. Bold or incredibly lame? I don't care. I am a huge Marlon Brando fan but I don’t know if it was this movie that started my fascination with him or if I was already into this guy’s work beforehand. For instance, I love One-Eyed Jacks and I sat through The Young Lions just for one brilliant Brando moment (“I have killed no one.”).


Paul’s wife’s suicide reveals to him that he didn’t really know her at all. It gets even worse when he meets the man she was having an affair with; a man just like Paul. His wife even bought the guy the same dang robe for Christmas. The greatest and most morbid moment in the film and probably my favorite of all of Brando’s monologues comes when he goes to view his dead wife’s body. He delivers a eulogy like I’ve never seen before. This scene is funny, jaw-dropping, profound, and insanely depressing.

So this sex/death obsessed film appealed to me at the time and I’d probably still get a kick out of it now. It is a celebration of life in the face of death, a tango in the face of misery, and it's also a real downer. It’s the physical world painted with bold strokes and in achingly painful detail. When Jeanne kills Paul at the end and then practices what she'll tell the cops (that she has no idea who he is), does she do it to free him? Does she do it for herself? Can she really not handle their relationship on a realistic level? Is Paul a sacrifice so that she can be happy in her new life? Or is she just setting herself up for a life inside a world of secrets like the kind that Paul’s wife lived in (which ended in tragedy)? Who knows? Maybe Paul deserves to die. Maybe this movie is so indefensibly pretentious and full of itself that I shouldn’t even be talking about it. But this comes from a period in my life when I had the patience for bleakly passionate shit like this. What can I say?