Wednesday Ramble: The Horror of Gigi 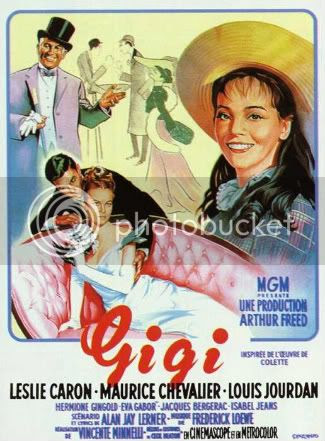 Thanks to my wife, I have actually seen some decent musicals and Gigi is one of them. The film is charming, funny, beautiful, and totally disturbing. Here, let me show you. First things first, turn of the century France is a dangerous and terrible place. Then Maurice Chevrolet shows up and talks about how great little girls are. He says he means when they grow up but I think he's a pedobear. He casually mentions that the story we are about to see is about Gigi (played by Leslie Caron). Not Gigli. That's a different sicko freakfest. No, Gigi, my sweet. You are damned. You must run. Don't let the sugar magnate catch you.

Gigi is a happy go lucky schoolgirl with a miserable old biddy grandma for a guardian. Her name is Mamita and she sends Gigi to an old crone named Aunt Alicia who is training Gigi to be a classy lady (whore) because Gigi's mother is too busy with her acting (whoring) career to deal with her own daughter. Aunt Alicia wears a choker because she has to hide all the scars on her throat. So many assassination attempts... This old snobby slut feeds Gigi some dead sparrows and makes her chew on the bones. Aunt Alicia instructs her to look down her nose at everyone and instills in her an unhealthy appreciate of jewelry. Wow, Gigi's life really sucks. The whole point of all this is for her to land a man. Not for marriage though! This is just so she can be some duder's mistress. Nice job setting your eyes on the prize, ladies.

Okay, I'm getting ahead of myself. That man-whore Maurice Chevrolet has a nephew (man-whore in training) named Gaston (Louis Jourdan) who is a rich and spoiled son of a sugar billionaire or some shit, I don't know. He thinks everything is a great big bore. But you know what? He's right. This is frickin' France. It is B-O-R-I-N-G! Gaston, please do us all a favor and fucking kill yourself.

"An ugly black cigar is love," Gigi says. She doesn't understand the Parisians. Don't worry, babe, no one else does either. Gigi and Gaston are like second cousins once removed or something like that. She cheats at cards but that's okay because Gaston is dating Eva Gabor (not the one that slapped the cop) so he's not all that bright in the first place. Eva Gabor is cheating on him with a rollerskating instructor (no, I'm not making that up) but he sees right through her lying Hungarian eyes. To keep his stupid male pride, Gaston confronts his woman about screwing Disco Stu. Through all this crap, we get to see the social structure of Paris back in the early 20th century. Holy shit, it's like The Crucible! All of these losers deserve a painful death involving white hot knives going into orifices that normally don't accept white hot sharp objects.

What is Maurice Chevrolet's advice to Gaston? What else would a man-whore tell a man-whore in training to do? Go screw every woman (and a couple of dudes) in France. That'll make you feel better! Gaston gets bored after a while and shows up at Mamita's place. They get Gigi drunk on champagne, sing a song about it, and then it's off to the seaside. Gaston and Gigi play in the water and ride donkeys while Chevy meets up with Mamita and they reminisce about when they used to get it on. So yeah, as I suspected, Maurice Chevrolet was a fucking dickhead scumbag (no, he hasn't changed at all) and he just barely realizes that maybe, just maybe, he screwed up the only good and real thing that has ever happened in his life. Does he change his ways? No, he's a lecherous bastard the rest of the movie. Big shocker.

Aunt Alicia: What the fuck, bitch? You took Gigi to the seaside with Gaston?

Aunt Alicia: So... Did you ever think that Gigi...

Aunt Alicia: That Gigi could be our little meal-ticket to Gaston's sugar fortune? All we have to do is dress her up like a Parisian whore and he'll totally go for it.

So these stupid old jerks intensify Gigi's training so that she can be Gaston's mistress. Notice how they're not even trying to get him to marry her. Ugh, the French are such sickos. Anyway, Gaston pays a visit and flips his lid when he sees Gigi dressed up like an adult. You see, he wants Gigi to stay a little girl forever. Heh heh heh heh. Mamita lets him know that Gigi is on the market and he flips out... again. Gaston then sings a song about how Gigi is still a baby and a tot. Then he realizes she's a hottie. "Oh, what miracle has made you the way you are?" It's called puberty, dumbass. So he comes back and says "Uh yeah, I was just kidding, she's totally old enough."

They work out a financial arrangement for him to take Gigi to his bed. Mamita explains everything to Gigi and she's all like "Oh thanks, asshole, now I'm going to be Gaston's whore." Gigi flips out, understandably, and refuses Gaston. It gets worse when he admits that he loves her. We get more bullshit between Gigi and Gaston, Maurice Chevrolet sings a song about how he can't get it up anymore, and then Gigi gives in.

They go on their big date and things go wrong when Gaston realizes that that dumb idiot Mamita and perilous beyatch Aunt Alicia have totally screwed Gigi up. She acts too much like Eva Gabor now, damn it! As an added bonus Maurice Chevrolet is there and he's like "Nice job, I likes 'em young, too." Gaston drops Gigi like a bad habit and runs off to reflect for a while. Then he goes back to the apartment and asks Mamita if he can marry Gigi. Whoa, what a great guy! Although, I suspect that he just did it because it's cheaper to marry her then pay for an apartment where he can keep her chained up for sex and stuff. God, I love this movie! It teaches values that are lost on today's generation.
Posted by Richard of DM at 7:21 AM