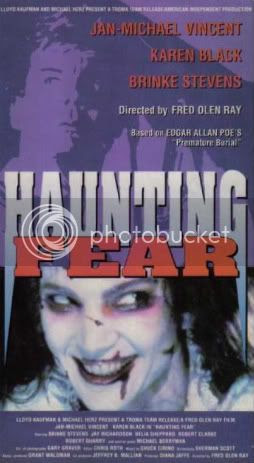 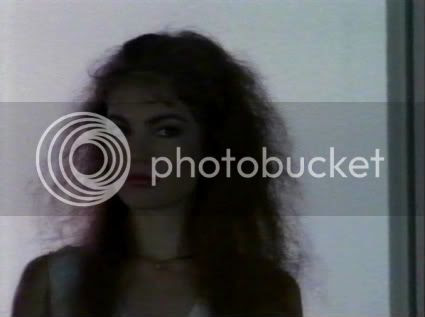 Victoria Munroe (played by Brinke Stevens) is haunted by horrible nightmares particularly those involving premature burial. Her husband Terry (Jay Richardson) is more worried about paying off his loan shark and banging his secretary Lisa (Delia Sheppard). Victoria blames Dr. Carlton (Robert Clarke) for the death of her father and is haunted by visions of her dad being buried alive in her dreams. Meanwhile, Terry's loan shark (played by Robert Quarry) sends his enforcer (Jan-Michael Vincent) posing as a police detective to keep an eye on the house in case Terry tries to skip town without paying. 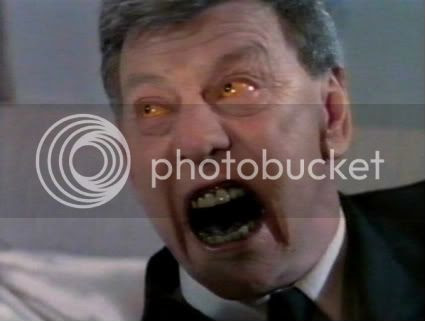 Dr. Carlton calls in Dr. Julia Harcourt (Karen Black), a paranormal psychologist, to examine Victoria. Using hypnotherapy, she uncovers that Victoria was buried alive by her husband in a previous life. In order to get a hold of her dead father's money and house, Terry and Lisa decide to use Victoria's past life trauma to try and scare her into having a heart attack. What they don't count on is Victoria going completely insane and going on a stabbing binge with a butcher knife. 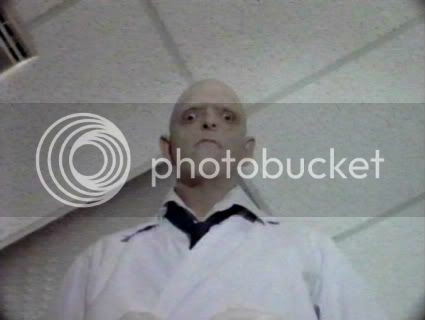 Well, color me surprised. I wasn’t expecting Haunting Fear to be this good. I have now learned never to underestimate Fred Olen Ray. It’s not my fault though. Have you ever seen Biohazard? The quote from Edgar Allen Poe, the simple opening credits that look like a classic 70s horror film, and Chuck Cirino’s perfectly pretty and haunting score, instantly convinced me this was a different film from the usual Ray insanity. Production values are modest but not rock bottom and the film is cut and shot excellently. There’s as much atmosphere as there is hokey bullshit in the script and things just sort of balance out. To fill in the gaps, there’s sex and even a little gore. 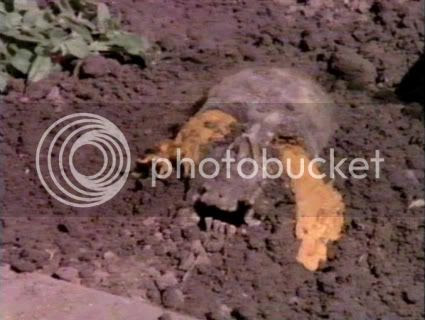 Ray regular Jay Richardson is such a great sleazebag in this movie. I can’t help but like the guy even though he is the scum of the earth. He and the lovely Delia Sheppard have a couple of love scenes that are ridiculously violent. It’s a love scene but oh yeah, they beat the shit out of each other. Karen Black (The Day of the Locust) rocks the Loretta Swit wig and the pink lipstick but she just seems kind of annoyed during her scenes. Michael Berryman (The Hills Have Eyes) makes a spirited cameo as a mortician. Jan-Michael Vincent is pretty good in this though he does seem a little out of place. His character has mixed up motivations (to say the least) but he does try to save the day. Alas, it is just too little, too late. 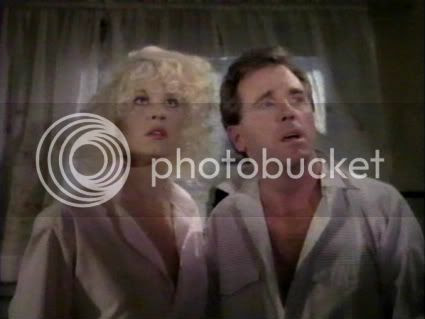 This really is Brinke Stevens’ (Sorority Babes in the Slimeball Bowl-o-Rama) movie. She knocks it out of the park as Victoria, a woman haunted by her dreams and who begins to lose her mind when those dreams start bleeding into the waking world. When she finally goes off the deep end, get the hell out of her way. Once her character comes back from the edge (I’m trying to not to say ‘brink’ here) of death, it is quite a transformation and well worth waiting for. When Stevens is in her crazy makeup, she channels Myrna Fahey in House of Usher but cranks it up a couple of loony notches. 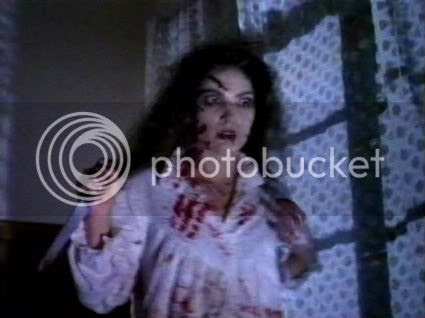 Haunting Fear is a twisted and cruel little horror movie that works because it manages to be equally trashy, horrific, and fun. Instead of rushing through things or being half-assed, Fred Olen Ray puts a great deal of care into the production. There are moments of subtlety and patience to allow Brinke Stevens to do something great with her character and it pays off big time. Is this a cheesy B-movie? Sure. Does it meet the requirements for junky late night cable filler? You know it does! But more importantly, this movie is a prime example of how awesome flicks can seemingly come out of nowhere and, for those of us who love the genre, be our instant classics. I’m already nostalgic for Haunting Fear and I just watched it yesterday.

"What a fortunate turn of events. I think this calls for a hot tub session... of some kind."
Posted by Richard of DM at 8:34 AM